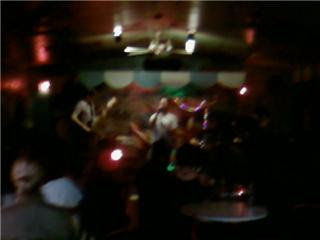 Well, despite being plagued by some kind of a stomach bug that had me laid up for most of the weekend, I did manage to make it out of the house long enough to go hear F for Fake on Saturday night over at The Carousel Lounge. They sounded really good, and it was nice to hear them playing again after having been dormant for a while (well, at least in terms of playing public gigs).

But other from that, I mostly hid out with Cassidy all weekend (and I don't think she was very pleased with me- when I'm home on the weekends, she usually gets a trip or two to the park or the greenbelt or whatever, so this weekend when I just wanted to crash, she kept whining and bugging me and looking for her leash). I watched a lot of TV, including The Bourne Supremacy, Gangs of New York, Saving Silverman, and lord knows what else (I know there was a Doctor Who episode in there somewhere as well as an episode of a show called In Plain Sight which was about people in the witness protection program... and the U.S. Marshalls that they love).

My brother, Roundball, (AKA, The League, AKA, Ryan) continued his run of Forest Gumpish luck on his blog last Friday when he reviewed one of the first comics that he had ever acquired- a Batman comic from what had to be the early to mid eighties(?). Well, Roundball had no sooner posted his review (with accompanying nostalgic anecdotes from his childhood) than the author of that particular comic, Paul Kupperberg, showed up in the comments section of the post to thank Roundball for his kind words and to wish him well.
It was really cool, and I know that Roundball had to be excited. After all, Kupperberg not only wrote for Batman (which is, obviously, one of the major titles in the DC Comics Universe), but he also wrote for Superman, which is one of my brother's favorite comics of all time.
But that's the kind of luck my brother has on his blog. He writes about people and then they show up. Maybe we can get him to review the Sports Illustrated Swimsuit Issue this year.
When I write about people it's all lawsuits and restraining orders....

Guess that's it for now. It's Monday today, but at least it's a short week! (at least for those of us who have a holiday on Friday for the 4th)
Peace.
Posted by J.S. at 10:47 AM