Howdy!  Things have been going pretty well over at our place, all in all.
On Thursday afternoon Mom picked up Raylan from daycare and he spent the night at their house.  Seems like he enjoyed himself.  Amy and I went out for dinner at Azul Tequila.
Friday night Raylan was back!  He's been going through a little bit of a cold or something, which has him sneezing and coughing a bit, although his mood still seems pretty good.


On Saturday morning we went to visit our friends Libby and Jordan and their son, Rowan, over at their new house.  Rowan must be headed toward being six months old or so at this point, and we haven't seen him since shortly after he was born.  He's a really cute kid.  He's very alert, smiles and interacts quite a bit, and really holds his head and body up to look around.  It was good to see him.
Their new house was also really cool.  It's an older home over on the East Side that they've just remodeled, and they did a really incredible job with it.
As Amy said, it looks like something out of Southern Living or some other design magazine.  Really a cool place.
Also, Jordan gave me a couple of his homebrew beers.  I already tried the milk stout, and it was really good.

After visiting Libby, Jordan, and Rowan we went to Home Depot, but Raylan wasn't really feeling it by that point.  (It takes some of the ambiguity out of figuring out why your kid is upset when they can keep yelling at you, "Go play?!")
We got like one quick item and then fled.
Mom and Dad stopped by to drop some stuff off for a bridal shower that Amy was going to help host, so we saw them for a few minutes.
We lunched and Raylan napped and we exercised.
In the afternoon we did our grocery shopping for our weekly stuff and bridal shower supplies.  We took care of some chores and errands.
Afterward we played in the yard and hung out on our new front yard deck.  I drank Jordan's milk stout (thanks, Jordan!), Amy had something or other (maybe some tea and some michelada), and Raylan's was crystal light in a sippy cup (which we normally don't give him).  Wild times on Tejas Trail!


On Sunday we got up and went out to breakfast at La Posada.  Afterward we went to The Natural Gardener out on Old Bee Caves Road.  We had a good time wandering around and checking the place out.  It's a really cool gardening center.  They, of course, have tons of cool plants and yard art, but also a few fountains and even some goats and chickens.  We'd gone out there to look for a few native plants that might have a decent chance of surviving in our yard.  We came back with several plants and some seeds, and Amy and Raylan went right to work getting them put into pots.

Sunday afternoon Amy headed off to attend/host the bridal shower for her friends from work.  It sounded like she had a pretty good time.
I had been trying to come up with plans and schemes to keep Raylan entertained in Amy's absence.  As it turned out, he took a really long nap and was asleep for a good part of the time that she was gone.
When he got up we ran over to the mall to run an errand, but it ended up being a really quick trip.

I got home and went to band practice a little while later.  Eric didn't make it, but the rest of us were there.  We sounded pretty good, I thought.
I got home a little late, and we ate Central Market dinners and then went to bed not too much later.
It was a good weekend, but busy!

Well, I just got done with a really fun (and tiring) week of Jean visit, SXSW, and birthday celebration.
Jean got here on Saturday evening.  We had a nice visit with her during the week, and she got to spend some good time with Raylan (and she was good enough to help out with some child care for us while he was on Spring Break).


I also got to take some time off this week to do some South by Southwest stuff.
The weather was pretty nice, so I rode my bike around a lot.  I started it on Wednesday, catching a couple of bands after work.

Also had a beer along the way.
I saw some pretty good music.


And somewhere between all of those live music acts I managed to fit in a screening of Logan.  Pretty good flick, albeit a bit of a downer.  Still, it breathed some reality into the characters of Wolverine and Professor X.  It's hard to say too much about it without giving too much away.
I think it sort of did for Wolverine, though, what Dark Knight Returns once accomplished for Batman. It sort of gave viewers at least one possible, very plausible version of where the whole Wolverine story might ultimately wind up.
I think the movie did a good job of telling that sort of story, which is saying a lot because there have been many tales told with that character over time.
Anyway, I enjoyed it and thought that it was well executed.

Friday night I got together with family and friends at Pinthouse Pizza to celebrate my birthday.  Mom and Dad took Raylan to their house.  Amy, Reed, Mandy, Donna Rene, Ryan, and Jamie came out, as well as some work friends- James (and Allison), Robert (and Laura), and Greg.
We had a good time catching up and eating pizza and drinking beer.
At some point, however, some bagpipers showed up and got really, really loud (they even had a drum)  They made it hard to talk.  Or think.  Or fight off a migraine.
Here's the thing.  Bagpipers aren't Irish.  They're Scottish.  Always in the St. Patty's parades and stuff, though....
Oh well.  We had fun!

By Saturday we were settling back into our weekend routine.  We got errands done and did some shopping and took Raylan out for breakfast.  We even planted a few potted plants and took Raylan to see all of the plants and fountains at The Great Outdoors.  Amy also got a chocolate cake, and, predictably, Raylan went nuts for it.


Sunday afternoon we visited Chad, Mary, and Truett in their new house.  Raylan and Truett had a blast running around together.

And that was about it.
Amy got me an XBox One for my birthday, and I literally fell asleep last night trying to play one of the Halo games that came with it.  It's a fun gift.  Thanks, Amy!

And I think that about covers it!
Thanks to everyone who helped make my birthday week so nice!  It was really enjoyable.  Felt like a mini vacation.

Here's the list of bands that I tried to keep in my phone while I was out wandering SXSW 2017.  I really liked The Tender Things.  Looking for an album by them

Hi! We're headed into Spring Break, South by Southwest, and St. Patrick's Day here in Austin! This is one of my favorite weeks of the year.Anyway, last week we got a small front yard deck installed at our house. It's just a little deck in the front yard, but hopefully it will prove to be a nice spot to sit and talk, play guitar, or watch the neighbors walk by. We're happy with it.

On Saturday Jean came into town for her spring visit.  She got in Saturday evening, so before she got here, we ran around during the day doing some errands and taking care of some chores.

On Sunday Raylan was baptized at Triumphant Love, the Lutheran church that Mom and Dad attend.  The service was very nice.  Pastor Steve was also very nice, both talking with us beforehand and skillfully getting through the service with an active toddler.
Ryan and Jamie came out, along with Mom, Dad, Susan, Jean, and our family friend, Judy.
Raylan sort of "helped" with his own baptism, trying to put water on his own head. 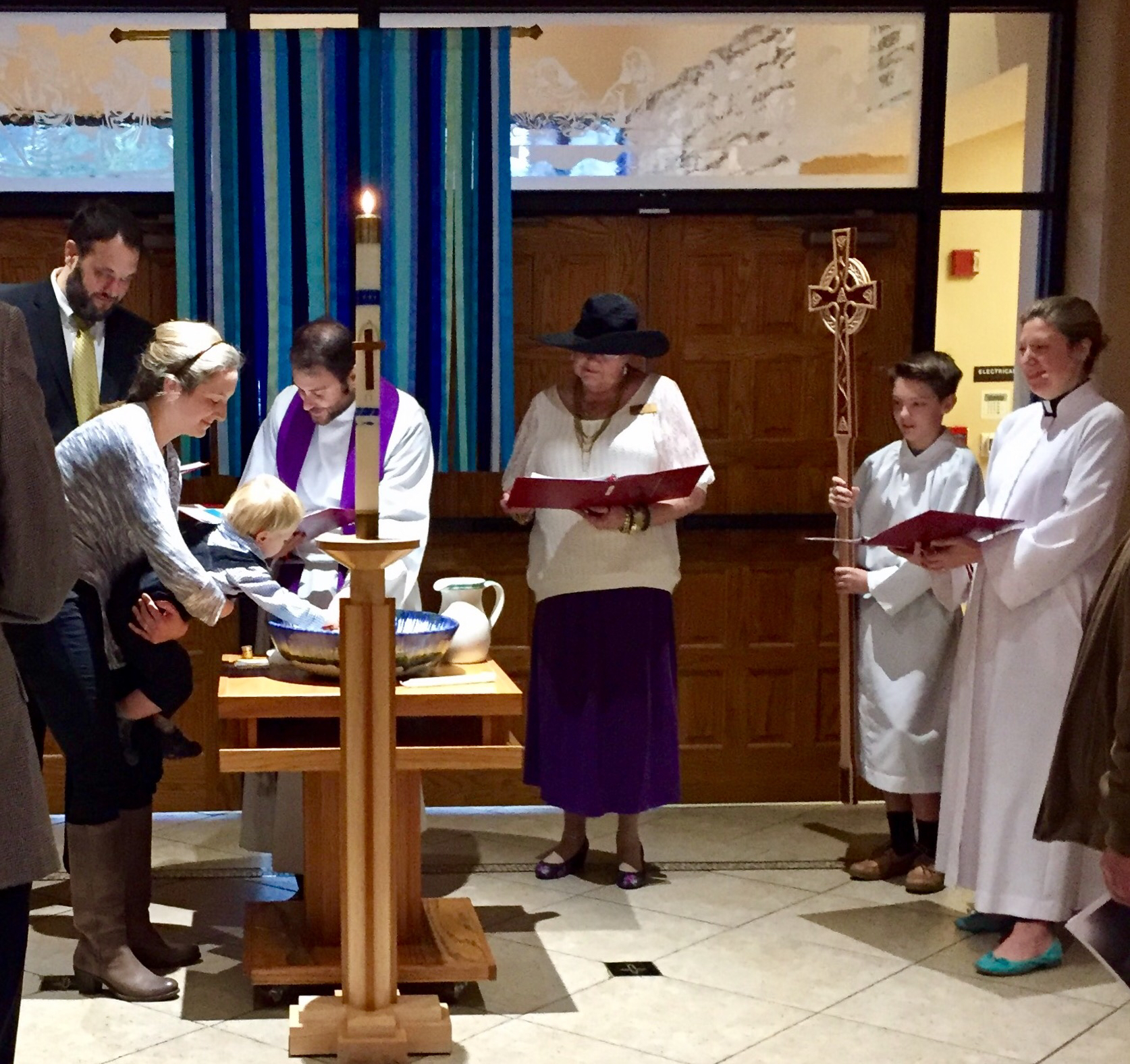 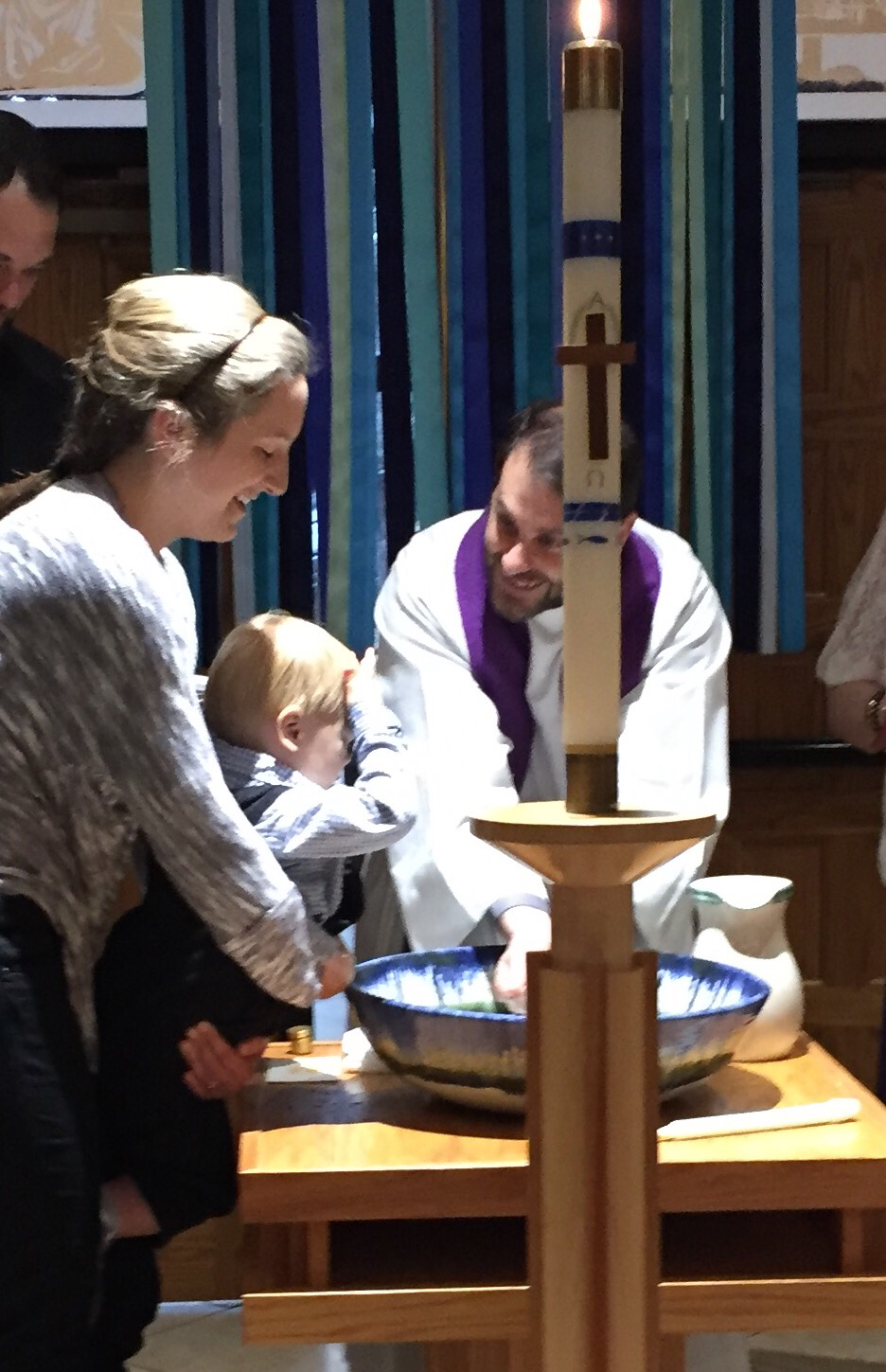 Sunday, after church, we took Raylan home, took him for a walk, fed him lunch, and got him a nap. We all got a chance to exercise.
In the evening Mom and Dad and Susan came over to celebrate the baptism and visit with us.  We ate pizza and drank wine.  My folks and Susan got some nice little baptism gifts for Raylan, and Mom brought a cake from Corner Bakery.    It was pretty casual, but very nice.


And that was the weekend.  It went by really fast, but it was good.
Have a great week!

On Friday night we went to dinner at La Posada.  It was fun to get out and have a relaxing dinner after a busy week.

Saturday was rainy.  It was Mom's birthday, but she was in Houston visiting friends.  So we were left to our own devices.
We ran some errands and went to the mall.
Amy bought a new suit (which looks nice on her).


In the afternoon, after Raylan's nap, we went to Costco.
Saturday night Amy and I watched The Expanse.  We've been enjoying it.  It's a science fiction show which deals with conflict between Earth, Mars, and "belters" who live in the asteroid belt, providing mineral resources for the planets, but struggling to acquire sufficient water, air, and food.
Anyway, it's a good show.  Most of the sci-fi shows that I watch involve faster than light travel and galaxy hopping protagonists, thereby moving them closertot the team of fantasy than anything based on an actual understanding of current science.  The Expanse takes place in a time that uses technology which is much closer to what we currently have available, and it still makes for really engaging, compelling television.

On Sunday we got up and went out for breakfast at La Familia.  It was pretty good, but La Posada is better.


After breakfast we went grocery shopping and took Raylan for a walk.
In the afternoon we took Raylan to the park over by Ryan and Jamie's house.  Jamie joined us at the park, and later we saw Ryan at their house (he'd been at work, but got home before we took off).
We ate dinner, and that was about it for the weekend (there was some work on unclogging a sink, but I'll spare you the details).

Hope you guys have a good week!