Hey!  Our weekend was pretty good.  On Friday night my parents took Raylan for the night, and we went out to see a concert.  We saw Wolf Parade at the Mohawk.  We'd last seen Wolf Parade back when we first started dating, I think. Amy pretty much introduced me to them, and I quickly became a pretty big fan.

They sort of broke up for quite a few years, but they put out a new album and went on tour in 2017, opening for Arcade Fire for some dates.  Anyway, it was a really good show, and it was fun to be out!  Thanks toMom and Dad for keeping Raylan!

On Saturday morning Raylan came home, and we played with him.  There was also some grocery shopping.  Amy made some tasty chicken tacos for dinner.


On Sunday we went out to breakfast at La Posada, and we took Raylan to Garrison Park to ride his balance bike.  We had fun.

Ryan and Jamie stopped by to visit for a while after Raylan's nap.  It was good to see them.
We took Raylan for a tricycle ride.  Afterward I went to band practice.  We were sloppy, but it was good to play.


After band practice I came home, ate dinner, talked to Amy, and passed out.
The end.
Posted by J.S. at 9:10 PM No comments:

Hey! How are you doing? I hope everyone's okay.  The federal government is shut down as I write this because our elected officials seem unable to compromise on anything.  It's not exactly a life-threatening crisis, but... it ain't great.
In our family, Amy and I have both been really busy with work.  Things were pretty busy before the holidays, and the pace, if anything, has sort of intensified in the new year.  Busy, busy, busy.


On Saturday I went to the gym, took Raylan grocery shopping, and we went to Home Depot.
Kit stopped by for a pop in visit with his mom (they were in the neighborhood while picking up some Craigslist furniture).  In the afternoon I went over to Ryan and Jamie's house to help Ryan move some TV's around.  I hung out with them for a little bit afterwards.
In the evening Amy made some delicious chilaquiles.


On Sunday we went to La Posada for breakfast.
Afterwards I went out and bought a new TV.  We'd been talking about upgrading our TV for a while, I guess that seeing the new one that Ryan and Jamie had bought finally motivated me to get moving on it.  I also managed to sell the old TV through Facebook marketplace within like an hour of getting the new TV.  So that was cool.

On Saturday afternoon I went for a bike ride while Raylan napped.  I rode over to St. Elmo Brewing Company and had a beer and read the news.  Then I pedaled home again.  It was nice.

Our weekend was sort of low key, but our work weeks have been hectic, so it was good.

Hope January is treating everyone well.

Hey! The weekend was pretty good.We had Monday off for MLK Day.

We spent Saturday mostly doing some errands and playing with Raylan.  I ran to the grocery store.  We went out to breakfast at Snooze.  I wasn't super impressed by my food (which was literally cold- cold eggs are probably something that a breakfast place should avoid).  Oh well.  At least we branched out! 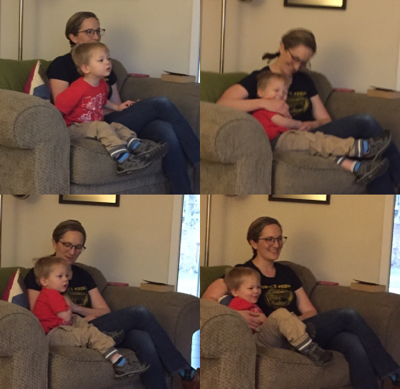 On Sunday Raylan had a play date with Truett (and Mary and Chad).  They came over to our house Sunday morning.  It was fun, and it was nice of them to come down to South Austin for a visit. 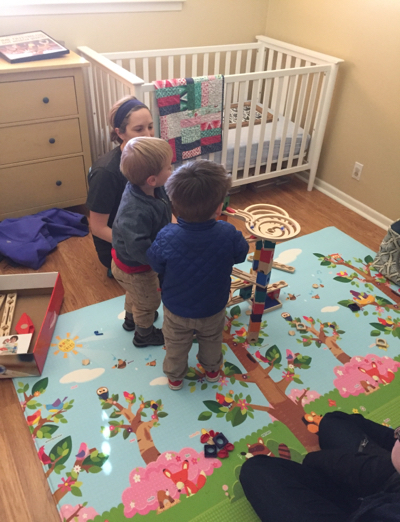 Sunday afternoon I went to a baby shower for Dan and Adriana.  It was at our friend Mark's house, and it was really nice.  There were a bunch of people there from work and the courthouse, and a few other friends from outside work (Hannah and Chris were there, and Kate, who retired from our office a few years ago).  Congrats to Dan and Adriana!
Anyway, the shower was nice.  Amy stayed home with Raylan.
Sunday night Amy made fish tacos, and they were really good.
On Monday we got up and took Raylan to the park. 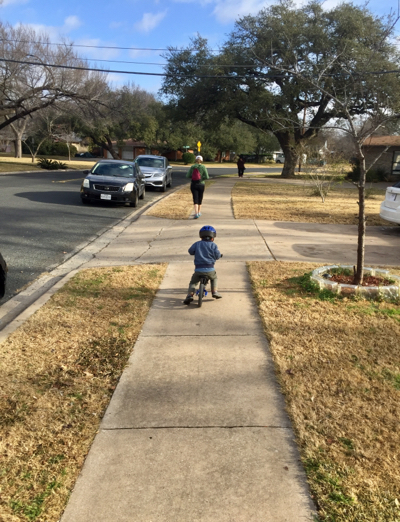 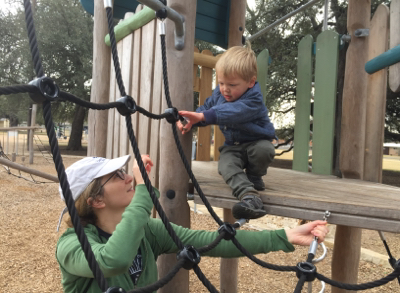 We all had a good time.
In the afternoon I went for a bike ride.  I had been expecting to have to do some work to get ready for a hearing on Monday, but at the last minute I got phone calls from the judge and opposing counsel, and the whole matter worked out.  So I got to go for a bike ride instead!
It was fun.  The weather was surprisingly mild for mid-January.  Pretty perfect for biking. 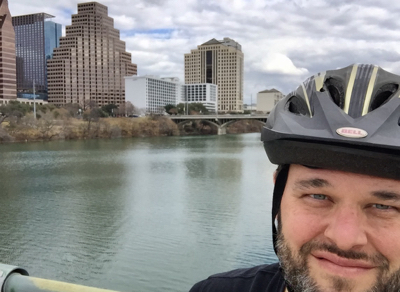 I got home and Raylan was up from his nap and making sidewalk art with Amy. 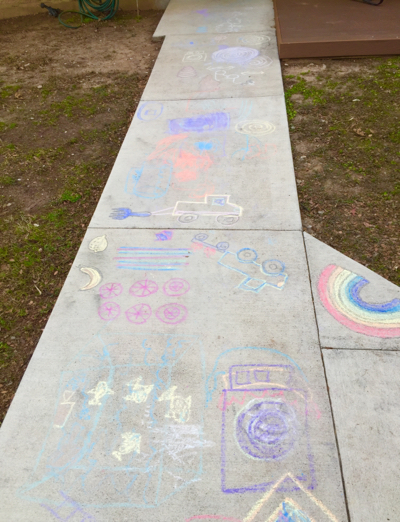 We played with Raylan and Amy made burrito bowls for dinner.

Today we've got the day off because an ice storm blew in last night.  It's hard to believe I was out riding around town in my shorts yesterday.

Hope everyone has a good week and stays warm!!

Hey! Well, we're off to a decent start with 2018.  We've been settling back into work after a nice Christmas break, and just sort of getting back into the swing of things.

I ordered a special present for Amy through a company called Pupsocks.  Their specialty is putting pictures of pets on socks, but if you send them a picture of your kid, apparently they'll do that, too.  Apparently the company got inundated with orders right before Christmas (after receiving some publicity about their products), and the small company didn't get all of their orders out before the holidays.  So one of Amy's presents arrived this week...

Our weekend was pretty good.  We went to La Posada on Friday night.  It was fun.  Raylan ate a quesadilla and seemed to like it.
Saturday involved a Costco trip, and the assembly of an IKEA dresser.  I also took down the Christmas lights.
Amy did a bit of sidewalk chalk with Raylan while I put the dresser together so he wouldn't hide the parts from me while I was trying to build it.


Saturday night I went to a baby shower for Ruben and Miguel.  They are expecting to adopt a baby in February, so that's really exciting.  I'm happy for them, and the shower (which was at Afton's house) was very nice.
Saturday night Amy and I watched the "USS Callister" episode of Black Mirror.  Good, fun, thought provoking sci-fi.  I'm not sure that every bit of the logic held up- but I'm not sure that it didn't, either.  We really enjoyed it.
On Sunday I got up and took Raylan with me to the grocery store to give Amy a break.  There was also some leaf bagging.  The trees in our yard tend to drop a few leaves...

We played with Raylan quite a bit.

In the evening I had band practice.  We were all there, and we sounded pretty good.
And that was about it!
It went by way too quickly.

Heading Into a New Year

2017 was sort of a strange year.  On a personal level, we had a good year.  Our jobs were good, our family life was good, our health has been good, and Raylan seems to be growing into a pretty happy, healthy kid.  We're counting our blessings on all of this stuff, to be sure.  We feel very lucky and extremely fortunate to have such great family and friends in our lives.
On the other hand, on a broader level, 2017 was a sort of troubling year.
Here in Texas we had Hurricane Harvey, which sort of wrecked Houston and the Gulf Coast.  We didn't suffer too many direct effects here in Austin, but Port Aransas and Houston are our neighbors, and they're places that we regularly visit, so it was rough to see the damage that they suffered.
Also, on a statewide level, we went through a legislative session where moderate Republicans joined forces with Democrats to put the breaks on some of our most potentially damaging, ideological legislation (e.g., in inordinate amount of time and energy was spent trying to decide which bathrooms transgender people are allowed to use).  The good news was that some of the most ridiculous pieces of legislation were defeated, but in the wake of this year's legislative battles, a number of good, commonsense Republicans announced their retirement rather than deal with headaches from more extreme primary challenges in the upcoming years.  Joe Straus, the Republican Speaker of the House of Representatives, announced that he would be stepping down at the end of his term, thereby removing one of the strongest remaining common sense voices for legislative politics in the state.
On a national level, Trump was Trump, and has pretty much lived up to most of the fears that Democrats had when he was elected.  He has waged war on the media, immigrants, various religions, the environment, and various foreign leaders.  He Tweets incessantly, and fact checking reveals that he is either cluelessly incorrect or blatantly dishonest at a truly alarming rate (even within the truth-challenged realm of politics).
I could really fall down a wormhole here in talking about Trump, but... that's how 2017 felt.  Every day I would read the news to see what sort of terrible mistake, idiocy, or outright lies had been made by our national leadership.  It has truly felt like we couldn't get through a week without doing something really stupid.  Most of the time it felt like we couldn't go 2 or 3 days.  It truly does feel like we are a nation that is in decline.

BUT, in our little corner of the world we're doing pretty well.

Amy and I both took off work from Christmas until the 3rd of January.  Raylan's school has been closed, and it seemed like a good chance for some family time.
We made it to the new Central Library downtown Austin.  It's a really nice facility.  The price tag for the city to build the thing was pretty steep, but it's a really cool building and a nice library.

The weather has been really cold for a lot of this week, so we've spent a lot of time at home playing with Raylan and his new Christmas toys as well as looking for places to take him where we can all stay warm (the library was one of these destinations).  Amy took Raylan to visit her friend Katarina and Katarina's son, Logan, up near Cedar Park.

On New Year's Eve we went out to breakfast at La Posada.


On New Year's Eve I had an afternoon band practice with the guys.

On New Year's Day we took Raylan to the mall so he could do some running around.

In the afternoon on New Year's Day we went over to Mandy's house for a get-together.  Kim and Miles, Andy and Rami and Wilson, Kelly and Jojo and Goldie, Donna Rene, Kate, and Spencer and Mandy were all there.  There was some good food, some drinks, and a lot of child-fueled chaos.  It was a good time.  It was nice of Mandy to have us all over.

Tuesday was the last day of Christmas break for Raylan, so Amy and I took it off.  We took Raylan to breakfast at Kerbey Lane, and then took him to The Thinkery to meet up with Grandma.  Mom and Dad got us a family pass to The Thinkery for Christmas, and it's a great present.  It was the perfect thing to do on a cold winter day on Tuesday.

And that's pretty much been our week.