Steanso offers up some entertainment recommendations for the weekend:

Friday night his friends Hillary and Stweart are playing with their country/folk band, The Flyin' A's from 7:00 to 9:00 at The Green Mesquite, on the corner of Barton Springs and Lamar. They're always fun to see, and I dig their 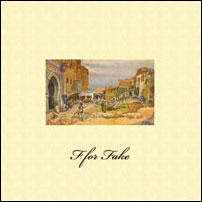 music. On Saturday night my friend Charlie Roadman's band, F for Fake is playing over at The Carousel Lounge over in East Austin. They're a really cool band with some interesting lyrics and catchy melodies, and I think they're starting around 9:30 (don't hold me to it). So, anyway, you can't come crying to me about how bored you were if you don't end up doing anything this weekend.

Hung out with Team Steans last night and watched some Kathy Griffin reality show. It was surprisingly funny (I've seen her one other stuff before, but her usual schtick always just seemed sort of mean spirited and annoying to me- she was funnier when they showed her "behind the scenes", where you got to see how hard she works in order to saty successful, and thus, why she might be a little bitter about the success of the cute and fuzzy Hollywood starlets who make millions for starring in movies when they're straight out of high school).

Not much. Hillary and Barack are getting together for a rally in Unity, New Hampshire. They're trying to mend some of the division that occurred during their heated primary race. I think it's kind of cool seeing them together. It's a little like one of those comic books where two superheroes are at odds with each other for much of the story, but then they finally realize that they need to join forces in order to defeat some greater evil and support the greater good.
Well, I don't have much else for right now, but maybe more later. Hope to see some of you suckers at the F for Fake show!
Posted by J.S. at 9:53 AM