Hello. Not much going on.


Had dinner with Team Steans last night and played some Grand Theft Auto IV. That game is a real life stealer. It's very immersive (meaning I get sucked in, and suddenly my life has slipped away from me for hours at a time), but it's fun. It's sort of compelling in a way that I typically get more from novels or a really good TV series than from a video game. The developers really emphasized the characters and their development in this game, and there are just a ton of 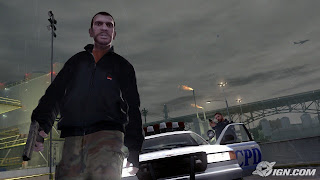 different things to do. Not only do you work security and carry out missions for various organized crime figures (your own character is a recent immigrant from some unspecified former Easter bloc country with a shady but sort of mysterious past), but you have a cousin, friends, and girlfriends to maintain contacts with and entertain. You can do all kinds of things on these "side missions", including going out to eat, going to various bars, attending comedy and music shows (which you can actually watch), throwing darts, going bowling (you actually play mini games where you bowl, play darts, and actually participate in your character's leisure activities), and so forth and so on. Interactions with people within the game help determine the way that they treat you (your cousin may get annoyed with you and refuse to do favors for you if you turn down his dinner invitations too many times, your girlfriend will get feisty and start leaving you nasty phone messages if you ignore her for too long- the various criminals who employ you lose patience very quickly if you're not successful in the assignements that they give you). The goofy little side missions get mixed in between high speed car chases, assassinations, and gun battles that break out when various drug deals go bad (yeah, you hang out with drug dealers- it's hard to make money when you're a new immigrant fresh off the boat with nothing but the shirt on your back).
Anyway, the graphics are great, the storylines are interesting, and the game really sucks you in. Definitely a "next generation" gaming experience, although one that requires a fairly significant time investment once you're involved with it.

Well, I don't have much today. Maybe I'll post later if I feel inspired.

Ugggh... that girlfriend that you have to take care of in the game- turns out she's a fed.