Hi!  Well, we're just wrapping up our second week at home since the COVID outbreak, and we're beginning week three.
Our contact with other people is pretty much limited to grocery store visits once a week, picking up food takeout, and talking to neighbors from a distance when they walk by out on the street.
Amy and I are both working from home.  Our courts have either suspended operation or have switched to a virtual court setup.
Mom and Dad have been taking care of the kids a lot, which is a lifesaver when it comes to getting work done.
We've also been finding ways to try to keep the kids entertained around the house.

Amy jogs for exercise, and I ride my bike.  The playgrounds are closed, and they're even trying to warn people away from the Butler Hike-and-Bike Trail downtown.  I take Raylan on little bike rides, the kids play in the yard, and Amy is really good at coming up with different activities to keep them entertained.

On Sunday morning we took the kids on a little hike down to Twin Falls on the trails.  It was nice to get out and stretch our legs.  Kiddo even managed to make it up and down the hills for the 2 mile trek.
I was a little disappointed and surprised that there was no water flowing through Barton Creek at the falls, but we still had a nice time.  We really didn't pass many people on the trail, although by the time we were leaving it felt like more people were starting to show up. 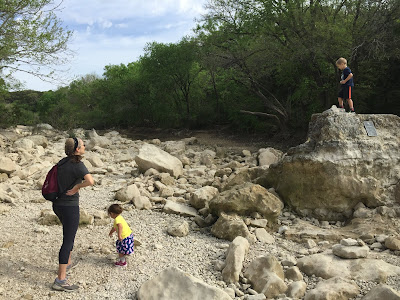 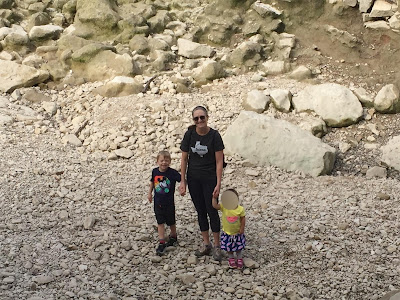 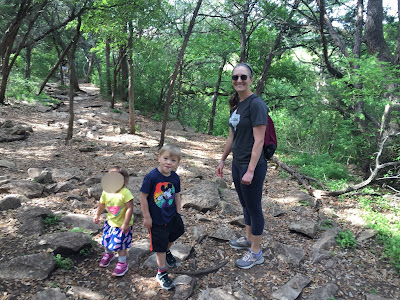 On Sunday Frank came over to play some guitar.  We played in the garage, and we sat far enough apart from each other not to infect anyone.  We tried to practice together virtually, but it just wasn't working (too much distortion and delay).
Anyway, it was good to make music.

Anyway, everyone stay healthy and be safe!

Well, it's been a strange week for our family, as I suppose it has for almost every other family in the country.  As COVID-19 has spread, here in Austin we've been increasingly under greater and greater restrictions in terms of what we can and should be doing.
The whole thing started seeming serious when they cancelled the South by Southwest Music, Til, and Interactive Festival for this year (an event that I usually attend to some degree every year and had planned to attend as a staycation this year as well).  SXSW is a huge moneymaker for this town, so hearing that it had been called off was definitely sobering.  It turned out that the SXSW cancellation was only the beginning of things, though.
By the start of last week, both Amy and I had our offices instructing people to work from home.  Within a couple of days the restaurants, bars, and other social meeting places had closed.
Now we're under a county-wide shelter-in-place order that has non-emergency businesses shut down and people ordered to stay at home.
On Monday, the night before the mayor ordered the restaurants to close, Amy and I went to eat at one of our favorite restaurants, Cypress Grill.  The rumors that gathering places would be closed were already circulating.  Our food was really good and the meal was nice, but we had a sort of sad conversation in the half empty restaurant with our waitress about the fact that the restaurants would probably all be closed the next day.  We left a nice tip and wished her good luck.
Last Tuesday, St. Patrick's Day, was my birthday.  My parents have been helping us out with the kids so that Amy and I can get some work done at home.  Raylan and Kiddo spent Monday and Tuesday at Grandma and Papa's house.
When they came back home on Tuesday they brought some nice birthday cupcakes!  Raylan had helped decorate them and was very proud of them.  It was very nice.  Thanks to Mom for undoubtedly being the driving force behind that. 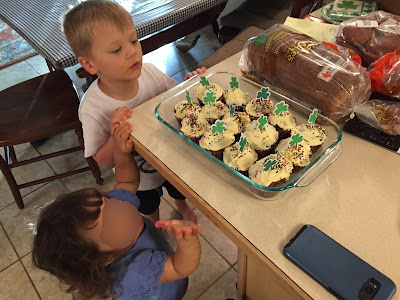 On Wednesday we actually went out to my folks' house again for a while so our cleaning lady could clean our place without us there.  Amy and I also got some work done while Mom and Dad played with the kids. 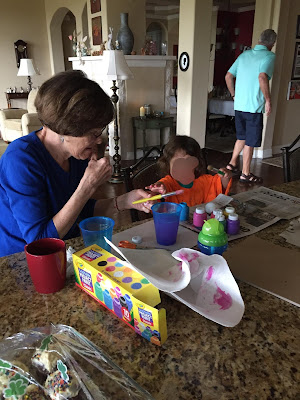 Thursday I actually had to go in and handle a docket for a while in the morning.  It was weird to be in a mostly empty courthouse in the morning on a weekday.  We all sat far apart and negotiated cases.  Apparently mentally ill criminals are not very good at controlling their behavior, even during a pandemic.  We've been setting up an online courtroom, but it wasn't ready on Thursday, so I had to go to the courthouse.

On Friday my folks took the kids again.  Amy and I worked during the day and tried to order Homeslice Pizza in the evening (takeout is still available).  When we got there to pick up our pizza, though, the place had caught fire.  (sad trombone)
The people who worked there were very nice about it, though.

On Saturday we went grocery shopping.  We were able to get some things, but other items were totally cleaned out.

The kids were back on Saturday.  They're like small chaos engines, but they're great at keeping a person's mind occupied.

On Sunday I took Raylan for a bike ride,

On Monday we worked from home again.  My working from home schedule has stayed surprisingly busy, and even a bit stressful.  There's a lot of pressure to move cases quickly so that people don't sit in the jail (potentially increasing the risk of contagion) any longer than is necessary.

The gyms have all closed, so I've been riding my bike every day.  I have to ride like 11 or 12 miles on my mountain bike (which has commuter tires) to get a pretty good workout (something sort of roughly equivalent to my gym workout).  Anyway, the vehicle traffic is really light.  There are some people walking, running, and biking, though, and every seems to want to wave at each other, maybe just because we're tired of being cooped up all the time.  Anyway, I try to ride my bike during lunch, when hopefully my coworkers aren't looking for me online, and then I eat a sandwich once I'm back in front of my laptop at the house.

So that's about it.  We're at home almost all of the time.  We go for some walks and ride bikes, and the kids play in the yard.

It's been a surreal and somewhat stressful period.  We're adjusting, but I worry about my family (and not just my immediate family) and my friends and acquaintances in my community.  I'm worried about the health consequences as well as the comic damage that's being caused.  Lots and lots of people are already out of work, and, depending on how long this lasts, the damage to businesses may be catastrophic.

But we're hanging in there and hoping that we can all just hunker down and get through this thing together,  Take care of each other.
And wash your hands.

On Monday I took Raylan to the dentist.  He was fine with going, well behaved, and his teeth were fine.
So later in the week things started getting a little weird with the coronavirus beginning to spread across the country.
Raylan was actually sick, complaining of chills and clocking in with a fever on Wednesday night.  Amy took him to the doctor on Thursday, and they said he had a virus, but not COVID-19.  He had a low fever on Thursday, which jumped into a higher fever by Thursday night.  I stayed home with him Friday, and he started to feel much better over the course of the day.  The kids' daycare closed on Friday due to contagion concerns, so Kiddo was home with us as well.

On Saturday we went to Dick Nichols Park for a bit.  We played around the house, and went out to Tarka for dinner for some Indian food.
I went to the store to do some grocery shopping for us, and the store was kind of a zoo, and lots of regular food items were missing from the shelves (no chicken or eggs and only a few loaves of bread).

Sunday was rainy and cooler.  We played with toys and watched some TV. 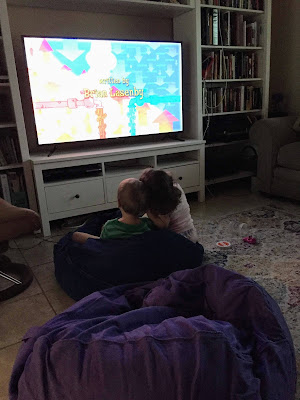 I went to the gym to get a run in on the elliptical (after carefully wiping things down).  They had every other cardio machine taped off so that they could insure safe distances between people who were using them. 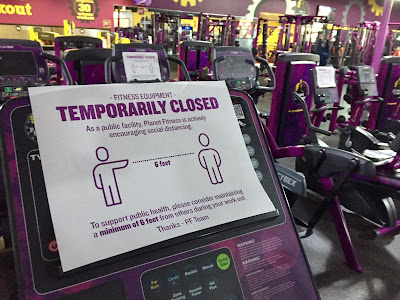 That's it.  Things are weird.  The kids' school is closed, our offices are employing telecommuting, and Austin is starting to feel sort of like a ghost town.

Everyone wash your hands and stay healthy.

Well, the weekend wasn't bad, but it was a little weird.

Friday night I think we mostly just relaxed.  I picked up some food from Central Market, and we ate at home.

On Saturday we got up and went to breakfast at La Posada.
After breakfast Kiddo was acting a little weird.  We took her temperature, and she had a low fever.
I ended up taking her to the doctor, and she had a double ear infection.  We got her started on medication.

Anyway, all of that took a little while.

In the afternoon Amy took Raylan to a martial arts birthday party for his friend, Otto.

On Sunday Amy took Kiddo and Raylan up to Katarina's house so they could play with Logan and Charlie.  It sounds like they had fun.
I mostly ran some errands while they were gone.  I got groceries and then rode my bike to the pharmacy to pick up a prescription.

In the afternoon I took the kids on a bike/scooter ride.  It was a little challenging.  Kiddo goes sort of slow and Raylan zooms ahead.

There was also some chill out time.

Sunday night I had band practice.  It was just Reed, Frank, and me.  We sounded pretty good.

And that was the weekend.  It went by really quickly.

Hello! Hope everyone is doing okay.

We've been pretty busy.  This past Tuesday was Fat Tuesday, so in honor of Mardi Gras, Amy made some delicious chicken piquant.  We all listened to funky New Orleans music, and the kids dressed up to celebrate.

On Thursday we had a mediation for Kiddo.  In the late afternoon, since I was already off work, I got a chance to go to Raylan's gym class (my parents usually take him) and see him do some cool gymnastic exercises.

Friday night I went out for the courthouse mental health happy hour.  It was a fun time, and it was good to talk to everyone.

On Saturday morning Amy took Bella for a jog in the stroller, and I went on a bike ride to Garrison Park with Raylan.  The weather was really nice, and we had a fun time.

Later, we went downtown to get my car (I Ubered home the night before), and then I took Raylan to the grocery store to get a few things.  He got to pick out some stuff at the store, and he had fun.

On Sunday we met up with Ryan and Jamie at Garrison Park.  The kids had fun "showing them the park" and playing with them.  Afterward we went to Hyde Park Grill for lunch.  We had a nice lunch, too!  Amy wasn't feeling great and skipped lunch.

Sunday evening I went to band practice with Reed, Frank, and Jim.  We've got a side project going (not Mono Ensemble stuff), and we're calling it Therapy Pets.  We played at Music Lab on St. Elmo.  We sounded pretty good!