It was a good Christmas!  Here are a few photos.  The crowns are a tradition that my parents picked up from some English friends.  I've Googled the meaning behind the crowns, but it seems like there are a lot of different explanations for them, and I can't seem to find a consensus on which one is correct (maybe English royalty presiding over celebrations?  maybe symbols of the birth of Christ the king?  maybe just a marketing gimmick created by the makers of the Christmas crackers that the crowns come in?)
Anyway, Dia de los Muertos in October.  Crowns and crackers for Christmas.
It's been a good year for some very cool new traditions.
Thanks to Mom and Dad for hosting! 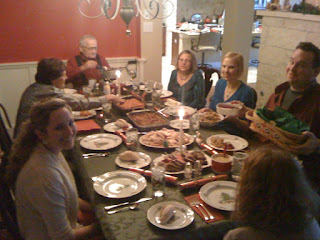 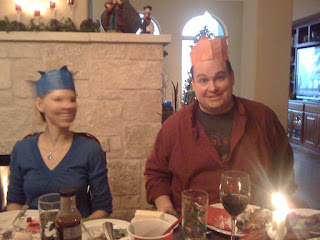 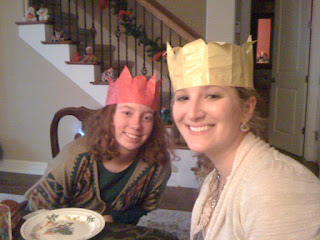 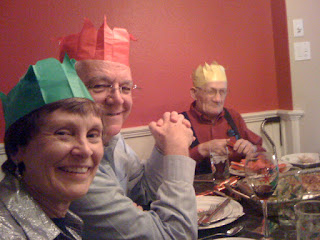 The weekend was a good one!
On Thursday evening I had Veterans Court, and afterward I met up with Amy and a few friends at Polvo's for a few drinks and some food.
On Friday I took the day off, and Amy and I went to San Antonio for a short weekend trip.  We drove down on Friday morning and came back on Saturday evening.  On Friday we went over to Trinity (my old alma mater) so Amy could see the campus.  There's a lot of construction going on at Trinity, but the campus mostly looks the same.  It's a nice place, and Amy seemed genuinely interested in seeing it, so it was fun to show it to her.  In the evening we went over and had dinner at Mi Tierra in El Mercado.  I hadn't been there in many years, and the food was good!  After dinner we went and had drinks on the Riverwalk.  We stayed at the Menger Hotel.  It's a really cool, historic hotel.  I had recently read All the Pretty Horses, which included a reference or two to The Menger, and there are some cool, old pictures of Babe Ruth and other notable figures who've stayed there hanging up in the place.  Teddy Roosevelt recruited some of the Roughriders in the Menger's bar, which, as it turns out, is still a pretty cool place to have a beverage.
On Saturday we got up and ate a bagel before heading to El Mercado for a little bit of shopping (we bought a spoon holder.  Yes, thanks to Amy's influence there's now an attractive item in my house that holds spoons).  After the market we went to the McNay, which is a really cool art museum that's built in a mansion (or at least one wing of it is a mansion) in Alamo Heights.  The McNay is a really cool place, both in terms of its art as well as the building and the grounds that surround it.  After the McNay we visited Mission San Jose on the south side before grabbing a sandwich and heading out.


It was a very nice trip.  Only a couple of days, but it felt longer to me.
Thanks to Amy for going!

Yesterday we went to see a production of the Nutcracker.  Reed's daughter was in it, and it was really fun (I'm not printing her name here because aren't you supposed to avoid mentioning the names of little kids in public pages on the internet?).  Anyway, she was a mouse and an angel and did a good job!  It was a nice production.
Last night I had Mono Ensemble practice.  Which was good.

Well, the past week has been pretty good.
On Tuesday Amy and I joined a couple of her friends from the School of Information for a screening of The Ice Storm at The Blanton.  The event was a charity function for The Bat Cave, an Austin program aimed at mentoring young writers.  Rick Moody, the writer of the novel upon which Ang Lee's film was based, was in attendance.  It was a really nice evening.  I had never seen the film before, and I enjoyed it quite a bit -  the experience undoubtedly enhanced by having Moody around to explain some themes and nuances of the story and to field some pretty thoughtful questions from the audience.
On Wednesday Amy and I had dinner with Ryan and Jamie at 1st Wok, a pretty good Chinese place on Stassney that holds some real promise in terms of becoming one of the regular spots on our South Austin rotation.  It's always nice to find a good place near the house that we can get to with minimal hassle.
Friday I went to an iSchool Christmas party with Amy where I met a few more iSchool folks, including both students and professors.  They seemed like a very likeable, amiable group.  We rocked to the sounds of The Banned Books (get it?  Band Books?  Nothing like librarian humor!) and had a drink or two.
Saturday I ran a few errands, and that night, after going out to dinner with Amy, I went to Ryan and Jamie's holiday party.  It was a nice evening.  Caught up with some folks that I hadn't seen in a while, and met a few new people.  It was a nice, festive evening, and the elves were merry.
Sunday involved some Christmas shopping (Amy and I went together- it's a whole different experience when you go with someone who actually likes to shop!), and then a whole lot of just cozying up at the house.

The concert was Sunday night, but I've still got The National ringing in my ears...

Well, our weekend was pretty good.  I already posted about the Wilco show on Thursday night (which was really, really good).  On Friday night we just stayed home and relaxed.  We're watching Six Feet Under (neither one of us had ever seen it), and we've both been really enjoying it.

On Saturday we went to Houston for my dad's retirement party (my dad is Rick Steans, for any readers who might not be in the know).  It was a really nice event.  Over three decades at Cameron!  We had dinner at Morton's Steakhouse near the Galleria, and a number of my dad's friends and coworkers from over the years were in attendance, along with their significant others, to give Dad a final, friendly send off.
My dad has worked with a number of these people for many years, having travelled with them, attended social functions with them, and having gotten to know their families.  My mom is good friends with most all of them as well, having also travelled with them, attended events with the group, and having invited many of them over to my parents' home for gatherings.
At any rate, it was obvious that my dad counts his coworkers among his good friends, and it was nice to see that his career has been about personal relationships and friendships as much as anything else over the years.  I will consider myself very lucky if I find myself retiring after working with a group of people who enjoy each other's company so much and who have such a strong sense of camaraderie.  I know that Dad is going to miss the people at Cameron quite a bit as he transitions into life in retirement.  Hopefully he can stay in touch with those friends and continue to see some of those folks periodically.  They've been an important part of his life for a long time.

We spent the night at a hotel right down near the restaurant before getting up and driving back to Austin in the morning.  Amy made some really good tortilla soup.  Come to think of it, she also made some really great stuffed peppers last week.  I'm really winning out with the Amy food!


After dinner we braved a bit of chilly, damp weather and went to see The National at Austin Music Hall.  The place was packed, and it wasn't exactly easy to see everything from our spot in the balcony, but the music sounded pretty good (not as great as Wilco, but pretty good), and the crowd was really into it.  I like The National.  Good mix of rockin' and mellow.

Anyway, Local Natives opened.  I'd never really listened to them before, but they were pretty good.  Nice harmonies, in particular.  They had a couple of songs of their own that I really liked, and they did an interesting version of Warning Sign by The Talking Heads.
I didn't really mention it in my earlier post, but Nick Lowe opened for Wilco the other night, and that was really good, too.  I really enjoyed him.  He did a really cool version of What's So Funny About Peace, Love, & Understanding.  The Mono Ensemble has covered that song for a long time, and it was cool to see the man himself performing it.  I felt like Nick Lowe was definitely head and shoulders above your typical opening act.

Anyway, that's it.  I'm a little tired today after this weekend, but it was all worth it.  Congrats again to my Dad!  Thanks to Amy for making the trip to Houston with me.  :-) 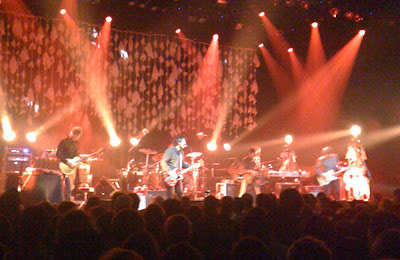 We went to see Wilco last night at the new ACL Live theater.  It was a really great show.  I've seen Wilco before, but they played really well last night.  The crowd was really into the show, and, probably even more importantly, the sound last night was the best I've heard at any show in years.  The people who built that new ACL venure really knew what they were doing when it came to putting together a place with great sound and great acoustics (and it seems like they must have had great people on the soundboards as well).  You could hear all of the instruments and vocals very clearly, and the sound was really well balanced (in stark contrast to the Phantogram show at the Mohawk where everything was drowned out by the drums and low end).
So just a really great show.  There were definitely a couple of goosebump moments (listening to the audience sing along with the chorus on "Misunderstood"comes to mind).   Wilco is probably one of the best rock acts playing live shows right now, and they were at the height of their powers last night.
Thanks to Amy for going with me!
Wilco, may you continue to rock for many years to come!
Posted by J.S. at 10:43 AM No comments: