So the weekend was pretty good. Friday night we had Crack practice at my house. Roundball stopped by and joined Andy, Sig, and I for part of the practice. It sounded pretty good, in a far out Crack sort of way.

Saturday I got up and took Cassidy down to the spillover. She was extremely happy to be there, and there was much hopping and swimming and playing with other dogs until she got tired and I took her home. Saturday 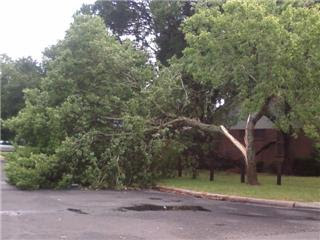 afternoon there was some kind of freakishly intense storm in my neighborhood. The wind was blowing so hard that you couldn't see through the driving rain, and after the storm, there were a bunch of trees knocked down, and even the flag poles by a nearby bank had been bent, I suppose because the wind was tearing at the flags so strongly. 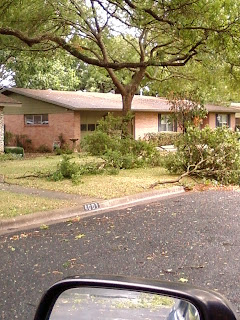 Mandy had a bunch of tree limbs fall in her front yard. It was a strange storm because places as nearby as my brother's house (a couple of miles to the south) and Ellie's house (a few miles to the north) seemed pretty much unaffected.

Saturday night Mandy had a few of us over for dinner. I got to meet Kellie and Damon's new dog, Pepper, who's a pretty cute little Staffordshire Bull Terrier. I tried to take some pictures of Pepper, but my camera was too slow, and Pepper was too fast, and all I ended up with were pictures of a little darkly colored blur. Mandy made some really good spaghetti.

Sunday I didn't do very much. Had breakfast with Team Steans, and then hung out at their place for awhile. Ryan and I played some kind of airplane game on the Wii where we were shooting down Germans over WWII London, and then after that we watched some Olympic diving tryouts.

I was sorry to hear that George Carlin passed away yesterday evening. He was not only a funny guy, but he frequently had some interesting insights into human nature and the absurdity of life.
Posted by J.S. at 8:58 AM