Well, it was a good weekend. Spring-like weather.

On Friday night we went out to dinner at Hyde Park Grill and the kids got Amy's Ice Cream afterwards.  There was much celebration.

On Saturday morning we got up and went to The University of Texas Memorial Museum.  We met up with Robert, Marina, Lowry, and Mirabel (friends from the kids' school).  There were some Boy Scouts and naturalists doing some nature displays at some booths at the museum, and the kids had a fun time running around and looking at the dinosaur bones, animals, minerals, and other exhibits.

After the museum we went to Crown & Anchor for some lunch.  It was kinda surreal to have lunch in one of the old law school haunts but to now have my kids running around the place.

Saturday afternoon my folks came over.  Dad helped me build some new patio furniture that we had ordered, and Mom played with the kids.  They were a big help.  Thanks, Mom and Dad!

On Sunday we had breakfast at La Posada.  Afterward we went down to Lady Bird Lake and walked for a bit around the hike and bike trail.  It was pretty fun.  There were a couple of times when the kids decided they didn't want to walk anymore, so there was some negotiation around that.  They both rode in the jogging stroller a bit.  Raylan brought his scooter and rode it for a while on the board walk.


Sunday afternoon we went over to Mandy's house for a little while to hang out with Mandy, Spencer, and Darla Dog.  It was fun to chat.

We also played in our yard quite a bit. 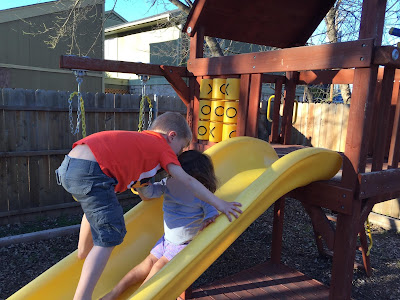 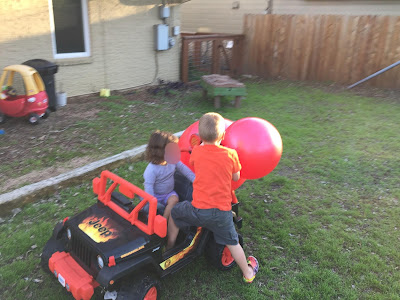 Sunday night the kids had dinner, and then I went to band practice.

Band practice was fun, and we sounded pretty good.

Hi!  So we had a 3 day weekend this weekend for the MLK Day Holiday.

It was a good weekend!

Saturday was a little bit cloudy and wet, especially through the earlier part of the day.  We took care of chores, while the kids entertained themselves around the house.


Saturday night I had band practice with the guys over at Reed's house.  It was a fun practice.  We sort of celebrated Reed and Eric's birthday.  Sort of.

Sunday was nice and sunny.  We went out to breakfast at Austin Java, and then took the kids to the zoo.

There was some art time in the back yard...

Sunday night we took care of Mandy's dog, Darla, over night while Mandy and Donna Rene were out of town.  The kids loved having Darla around.  And Darla seemed pretty happy for all of the extra love and attention.  For the most part.
Okay, well, sometimes she looked at me desperately for help when Kiddo would not stop hugging her.


On Sunday we met up with Raylan's friend, Dorothy, and her parents, Cesar and Sue, at Dick Nichols Park.  Amy texted Shelly, and she met up with us with Spencer, too.  The kids played and rode their bikes and had a lot of fun.


After playing, we all went for lunch at Flores on William Cannon.  They had Mexican food and... a playground!  The kids played, and we all got to eat lunch and talk a bit.  It was a nice way to spend the day.

Afterward, we went home and played around at the house through dinner time.

That was basically the weekend!
It was a good one.  Somehow it didn't feel like 3 days...

It felt like our weekend went by pretty quickly.

On Friday evening, the weather forecast for Austin included severe thunderstorms and even the possibility of tornadoes.  Travis County sent all of its employees home at 2:00 p.m., because they said they didn't want people driving home during terrible weather at rush hour.

Well, that forecast turned out to be a bit overblown.  We did get some heavy rain, lightning,  and a bit of wind.  We even had pea sized hail for about 5 minutes.  But the serious weather didn't roll in until after 8:00 p.m., and it didn't last very long.  It never felt very threatening.  Which was good!  But we could have used a little more rain...

So Friday night we stayed home.

Saturday we mostly played around.  Amy took Kiddo for a walk, and Raylan and I played with his scooter and climbed trees and stuff.

In the later afternoon/early evening, Shelly and Kit came over with Spencer.  We took the kids to Doc's and had dinner.  The kids got to play on the playground.  Afterward we went back to our house and the kids all played together really well for a while.  It was a  nice evening.  good to catch up with them.

Sunday we got up and went to the park.  We tried to go to Gallindo, but they have locked the gate over by that school for some reason.  Luckily, Ryan called us right as we were getting back into the car.


We ended up going to Ryan's house and then walking to his neighborhood park with him.
Ryan and Raylan went for a walk on the trails in the neighborhood while Amy and I played with Kiddo on the playground.  It sounded like Raylan had a lot of fun "exploring" with Uncle Ryan.


Later we went to Cici's for some pizza.  In the evening I went to band practice with Frank, Reed, and Jim.  Jim's bass guitar broke, and he managed to fix it with some tape.  Amazing.
Anyway, we had fun, and I think we sounded pretty good.

We had a pretty good, albeit low key, weekend.

The kids were with my parents from Wednesday through Friday.  Their school was still closed, and Amy and I needed to work, so- THANKS, MOM AND DAD!!!!  They apparently had a blast staying with the grandparents.  When Kiddo got home, she walked around the house with her stuffed rabbit for a while saying, "I wanna see Grandma!"

On Saturday we took the kids to Garrison park in the morning.  Raylan rode his bike.

In the afternoon we played around the house.  At some point I took Raylan on a sort of long (kid version of long) bike ride around the neighborhood.

Saturday night Amy and I finished Season 4 of The Expanse.  I'm not sure it was as good as season 3, but it was still pretty good (and season 3 was one of the best seasons of TV science fiction of all time, in my opinion).

Sunday we went to Kirbey Lane for breakfast, and then we went to Joslin Park.  Ryaln and I rode our biked there, and Amy pushed Kiddo in the stroller.

In the afternoon we played around the house.


Sunday evening Frank came over, and we played acoustic guitar in the garage.  We had a good time, and we sounded alright.

Well, 2019 has come and gone.  We had a good year, really.  Kiddo has been with us for more than a year now, and she is definitely part of the family.  Work has gone well.  Everyone has been healthy and happy.  I'm very thankful.

Our New Year's celebration was pretty subdued, but nice.

I got off work early on Tuesday, New Year's Eve.  And came home to hang out with the fam.


Raylan and I ran to the store and bought sparklers, poppers, and cupcakes.  The kids had a fun time, and sort of, kind of, understood what we were celebrating.


Amy made queso, and I watched UT Utah in the Alamo Bowl.  UT played an awesome game.  I'm not sure where that team had been for most of the year.   UT had fired their offensive and defensive coordinators, so Tom Herman was supposedly just calling his own plays.  And it went beautifully.  Makes me wonder what we're paying those coaches for.  (Not really) (Well, maybe really)

Anyway, it was a really fun game to watch.  I wish we'd looked that good for some of our other games, but.... gift horse and all that.

Anyway, no one in our house stayed up until midnight.  I seem to remember briefly waking up when the fireworks went off.  So that must have been midnight?

On New Year's Day we all got up and had breakfast together, and we played with the kids for a while.  Eventually my folks came over and picked up the kids.  Raylan and Kiddo went to spend some time with the grandparents, both to give us a break and because they are still out of school and we have to work (so this saves us from using up all of our vacation days).

Amy and I went over to Mandy's house on New Year's Day for a little gathering.  Andy, Wilson, Kim, Miles, Kellie, TJ, Goldie, Jojo, Vicki, Donna Rene, Spencer, Ellie, and her foster son were there.  We had a nice time.  We didn't have kids, so we could just talk to the adults.  Weird feeling!
Anyway, it was very nice to see everyone!  Fun get together!

Later, Amy and I went to see the new Star Wars movie.  It was okay.  I enjoyed it more than I thought I would (I'd heard some pretty scathing reviews), but not my favorite Star Wars movie.  Still, glad I saw it on the big screen.

And that was it!  I'll leave you with a pic of the kids having fun at their grandparents' house... 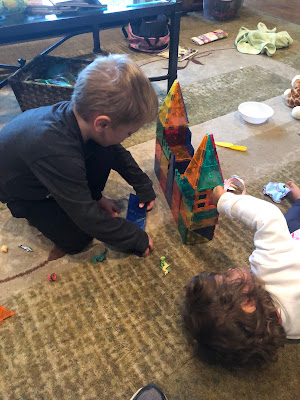