Hello!  Well, there isn't a heck of a lot going on at our house.
More of the same.  Some swimming at the Farleigh's house (Grandma and Papa fed us lunch), working at home, and trying to keep the kids happy.
I'm just going to post some pictures this week because, I can't think of anything that has happened....

Howdy!  Hope everyone is doing well!
Our family escaped our house this week and went on a family vacation down to Galveston.
Jean flew in last Saturday.  We had kept her arrival a secret, so the kids were super excited when Nana showed up!
We hung out on Saturday, packed up on Sunday, and rolled down to Galveston on Monday morning.  Amy found a very house for us to rent down there which was about a block from the beach.  The beach wasn't crowded at all, and, other than a quick trip that I took to the grocery store to pick up some supplies, we were pretty much away from other people the whole trip.  We did all of our cooking at the beach house.


We had been watching the weather pretty closely.  Hurricane Hanna had come through the weekend before we headed to the coast.  It ended up hitting further south, though, and didn't effect us much.  Even without the hurricane, we were still looking at some potential rain.  We didn't care much, though.  After being in lockdown since March, we were desperate to get away.
As it turned out, we had a little rain each day, but only a little (an hour or two).  We had nice, cooler than usual weather with a mix of sun and clouds.
Our beach house was on stilts (like many of the houses on the island), so the kids loved that.  It also had an outdoor shower, which was a big hit, and a hammock.  It was a nice place!  (three bedrooms and two baths).
There was some seaweed washed up on the beach on Monday, following the bit storm, and Raylan was afraid of it.  It was mostly cleared up by Tuesday, though.  Kiddo loved the beach and the water from day one, and Raylan was very excited about it by the second day.  Both kids loved swimming, playing in the waves, looking for shells, playing in the sand, and feeding seagulls.  They played with shovels, boogie boards, and some kites that Nana brought. 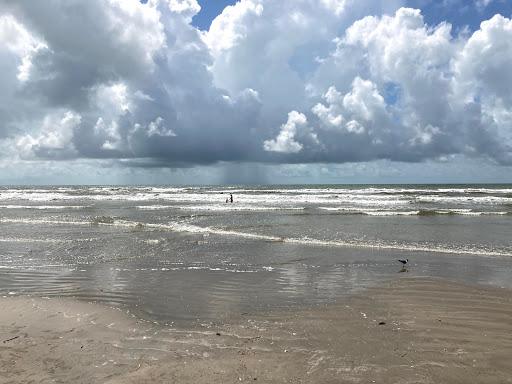 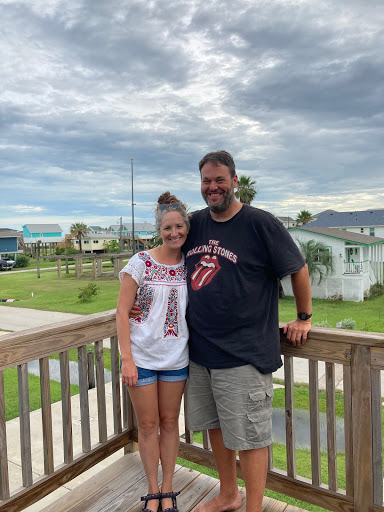 We had a really fun trip.  It was really nice to have Jean with us so we could have some bonding time with her!  The kids looooved having her on the trip!
We drove back on Thursday (with an obligatory Buc-ee's stop for lunch).  On Friday evening Jean flew out.
Saturday we went out to go swimming at Farleigh's pool with my parents.  Later we had lunch at their house.  It was great to see them.
Today I went for a bike ride.
I often ride down Congress Avenue when I ride downtown.  I toook a detour of a couple of blocks today to see the makeshift memorial for Garrett Foster, a Black Lives Matter protester who was shot, apparently by an Uber driver and active duty soldier last weekend.
At work, I've had some professional dealings with some criminal cases that involve the protests, so I'm not going to comment on them here, really, other than to say that seeing the memorial brought home a sense of tragedy and sadness.  Sorry to see this violence happening in our town.


And I'll close with a pic of Raylan, along with a paper town that he built with Amy.

Anyway, we had a really nice time at the beach.  It was fun to go to the beach, great to see Jean, and really nice to get out of the house for a while!
Hope everyone has a good week!
Posted by J.S. at 2:25 PM No comments:

Hi!  It's been hot!  We've been working!  From home!  Grandma and Papa have been helping with childcare!
Basically, it's the same thing, different week.  Not bad, but.... repetitive...

I don't have too much else.  Played on the front porch with Frank!  It was fun.
Amy did lots of crafts with the kids!  I took Raylan for a bike ride.  I stopped off on one of my bike rides and chatted with Ryan and Jamie on their porch.
Took Raylan to Dairy Queen (drive through).
Just L-I-V-I-N!!!!
Hope everyone is doing okay!  Stay safe!
Posted by J.S. at 6:11 PM No comments:

Hi!  So it's hot here in Austin!  Hit like 106 yesterday!  Supposed to hit somewhere around the same today.  Yowza!!
I've still been trying to ride my bike.  I go around lunchtime.  The humidity has begun to burn off by then, and it's still not insanely hot yet.
The days are all feeling a little like a weird loop.  Some days my parents take care of the kids.  Some days we work.  But we're mostly just in the house and wandering around the neighborhood.  Lately, it's just been hot and sunny every day as well.

I had a Zoom happy hour with some co-workers from the mental health docket on Friday.  It was nice to see some friendly faces and have some adult conversation.
On Saturday we went out to my parents' house and went to swim in the Farleigh's pool again.  It was so nice of them to let us use it.  Felt like a little vacation.  Good for our mental health, and it helps the kids burn off some energy. 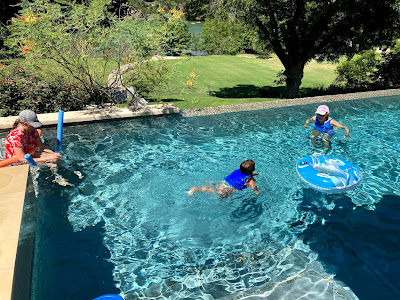 On Sunday morning I took the kids for a walk/bug hunt.


I also went for a bike ride on Sunday and hit my 4000th mile on my bike.  I hit 3000 sometime in mid to late April.  Given the pandemic, I've been skipping the gym and riding my bike during lunch almost every day. 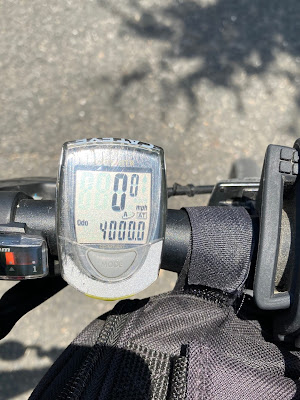 Later in the day we did sprinklers in the yard.

On Sunday evening Frank and I played music in the front yard.  It was a little warm, but we had a good time.  I think maybe we sounded okay.  I think.
That's about all that I have for now.  It's all a blur.  Amy has made pudding with the kids and done some crafts with them.  My mom and dad continue to take care of the kids, giving Amy and I invaluable time to get work done.
We read storied.  We sing songs.  We play with Legos and Brio trains.
Amy and I watched Hamilton.  It totally changed our lives.  (no it didn't)
That's it!  Have a good week!  Hydrate!

Hi!  Well, like most everyone else, we had a sort of unusual 4th of July weekend.

Amy and I both had Friday, the 3rd, off from work.  Given that Texas is in a big coronavirus uptick in terms of the infection rates, parks and pools across Austin were closed this weekend, and pretty much all public celebrations were cancelled.

We spent Friday playing in our sprinkler and inflatable pool in our yard.

I took the kids for a walk at some point, and they wanted to see Mandy and Darla Dog.  It turned out that Mandy had Jojo and Goldie, her nieces, at her house for a sleepover.

Raylan and Kiddo got to have a little sparkler party with the girls in Mandy's front yard.  I'm not sure we hit every guideline for social distancing between the kids, but they were really starved for some playtime with other kids, and they were outside and running around, so it seemed worth the minimal risk.

In the evening we went over to Mom and Dad's house for burgers and picnic food (corn and fruit and chips and pasta salad).  We had a fun time, and the food was great.  It was nice to get a chance to actually talk a bit with Mom and Dad.


On Sunday I thought I could take the kids to a park just to walk around, even if we couldn't use the playground.  The entire parks were closed, though, with signs and barriers up.

Raylan and Kiddo seemed mostly disappointed that they weren't going to eat the snacks that we had packed, so we used some camping chairs and had a snack picnic in the parking lot at Joslin.

Later, we rode around in the Jeep and played in the inflatable pool again.

Sunday night Frank came over and we had social distancing music practice in our yard with acoustic guitars.  It was fun.

And that was it!

Hope everyone is hanging in there!

We had a pretty significant court date with Kiddo this week.  It's starting to look like we may be able to adopt her!
We're overjoyed by this news!  She's been a big part of our family for a long, long time now, and frankly, it's hard to imagine life without her.  It's been a nerve-wracking week with that hearing taking place, but things seem like they've turned out okay.

Other from that, we're mostly just working at home and trying to keep ourselves busy and healthy during the pandemic.


That's about it!  Hope everyone has a good 4th of July weekend!

Last Monday the U.S. Supreme Court handed down a ruling which made it unlawful to discriminate against people on the basis of sexual orientation in the workplace (and maybe for other purposes, too- I'm not sure).  That same day we had the first big rainbow over South Austin that I've seen in years.

Amy and I both took Friday off.  We took the kids and met my parents at Emma Long Park.  It was a really nice outing!  We played in the water and ate some snacks up but the picnic tables.  The park wasn't crowded, but eventually it got a little tricky to maintain social distancing on the beach.  Beautiful spot on the lake, and nice weather!

We ate lunch afterward and then the kids went to spend the night with Grandma and Papa.

On Saturday morning Amy and I joined the family at their house and then went over to swim in the Farleigh's pool again.  It was a really fun time.  Afterward, we ate some pizza at Mom and Dad's house.


Saturday night I had an outdoor, acoustic band practice with Reed, Frank, and Jim.
We had a lot of fun, and sounded pretty good.

On Sunday, Father's Day, we had my parents over for a cookout.  In the morning I played some games and did some art with the kids.  Later, I took Raylan to Mabel Davis Pool for awhile, and then we came and cleaned up for the cookout.  Amy made a corn salad, green salad, and grilled chicken with bacon, chili, and cheese on it.  Mom brought lots of fruit.  For dessert there was icebox cake, homemade strawberry ice cream, and Mom brought brownies.  The food was great, and we had a great time.