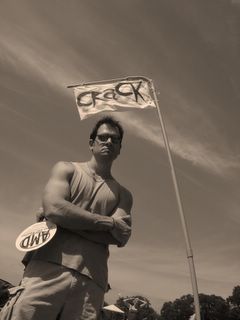 Here we have Jackbart guarding the Crack festival flag at Camp X-Ray, our base camp. Many, many people became familiar with the Crack flag throughtout the course of the weekend. Jackbart clearly hates AMD, as you can see by the anti-AMD fan in his hand. We had to eventually talk Jackbart down after he tackled a few concertgoers. He was operating under the erroneous assumption that they were trying to "capture" our flag.

OMG! Jackbart is SUPER sexy! Do you know him??? can you get me his autograph?

Do any of us really know Jackbart? I mean, really know him? Who knows what evil lies in the heart of Jackbart? Maybe Crackbass...

Well, I know him well enough to recognize a fake posting by him under an assumed name when i see it. This "mandie" is obviously JackBart himself. Or perhaps his mom, JackieBart. My guess is it is from him, as he used to write "JackBart is fine" on the desks in jr. high and high school, thinking that this propaganda would trick others into believing it was true (which, oddly enough, it was. he was fine, in fact, damn fine.) He learned this trick from the Reagans, and is, to this day, a Reagonophile.

First off, I prefer the term "Reaganite".

Secondly, this poster was my sexy boss at IBM, who has the annoying habit of coming into my office when I am not working (and doing things like reading Steanso's blog). Fortunately, she was so entertained by the Adventures of Steanso, I was not professionally disciplined for my lack of work performance.

Sexy women are often driven to distraction by The Adventures of Steanso. I am not surprised by this turn of events.