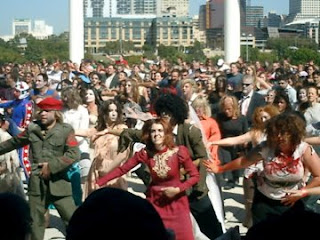 Well, while Ryan went to the UT-OSU game this weekend (go Horns!), Jamie talked me into going to see a bunch of crazy Austin zombie dancers take part in Thrill the World, which was billed as the largest ever synchronized, worldwide performance of Michael Jackson's zombie dance from the video to his hit song, Thriller. While the thing was nominally a world wide event (and did, in fact, take place in cities across the U.S. and a few other countries (mostly Canada and England), in true Austin fashion, we had by far the most zombie dancers of any city taking part in the event (e.g., Seattle had 195, L.A. 114). Once again, I gotta say I find it freakin' awesome that there were about 900 people in Austin who felt motivated enough to get off their sofas, learn a pretty complicated dance (there really were a lot of parts to memorize), and show up in homemade zombie costumes on a Saturday to pull this thing off. Just for the heck of it. I love this town. 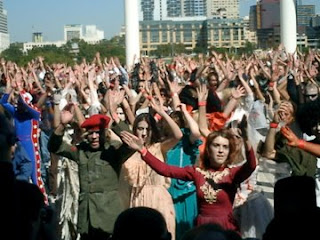 Here are a few photos that I took on Jamie's camera. The YouTube video was shot by someone else, who, strangely enough, was apparently standing very close to us (judging by the camera angle). 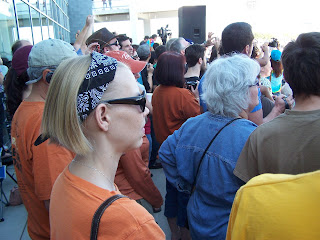