Oooookay. Well, not too much going on. Ryan and Jamie are getting their floors redone and walls painted, so I have their dogs, Mel and Lucy, at my house for a few days. Things have been going okay so far. It thundered last night, so their big, old golden retriever, Mel, came and stuck his nose in my face in the middle of the night and then slept next to my bed for awhile before deciding that, thunder or not, my sofa was comfier than the floor, and heading back into the living room. For some reason I left the dogs in the house when I left this morning, which seems pretty silly in retrospect because it's a beautiful fall day outside, and given the opportunity to choose, I think that even I would rather be outside enjoying the weather rather than being cooped up indoors.
Not much else to report. Dinner last night at Suzi's with Team Steans, and afterwards we watched The Big Bang Theory (a CBS sitcom starring family friend, Jim Parsons). It was funny.
Economy is still tanking, but there's not much we can do about it other than just sit tight. For a few years now I've been feeling like I should have been doing more to invest my money, but at the moment, my lack of initiative is feeling like a good thing. Still gotta work on the investment thing at some point, though.
And there's a second big presidential debate tonight. To be honest, I really sort of doubt that I'll watch it. This presidential election stuff is tiring, I already know who I'm going to vote for (Sigmund Bloom for President), and the reactions to the debates, honestly, seem more important than the debates themselves. I'll probably just DVR it and fast forward through most of it. To be honest, there's also been an increase in the character attacks and the mudslinging lately (we're getting down to the desperate final days before the election), and I just don't want to sit through an event that's likely to include that kind of crap. It's very disappointing and disheartening, no matter which side it's coming from.
Here's an interesting column from admittedly left leaning Keith Olbermann, and about how Sarah Palin probably ought to not start throwing stones when it comes to calling people terrorists and hanging out with people who are on the fringes of mainstream political thought. Apparently Palin's husband has, fairly recently, been part of a political group which wants Alaska to secede from the United States, and one of the pastors that Palin pals around with prides himself on the fact that he had women branded as witches and exiled from their village when he did missionary work in Africa. Olbermann doesn't mention it, but I thought it might be more appropriate to point out that Palin had served as a director for a women's political group organized by Ted Stevens- an Alaskan Senator now on trial for bribery and corruption- and that Palin had received an endorsement from Stevens and filmed a campaign commercial with the man during her run for governor in 2006. Stevens is on trial right now and Palin's connection to him is only a couple of years old (while William Ayers had charges against him dropped about 40 years ago), so it blows my mind that Stevens' name doesn't pop up every time Palin is mentioned. Liberal news media, my a%$. Personally, I don't really go for the mudslinging all that much, but if Palin thinks that "the gloves should come off", then we might as well start airing all of the dirty laundry. 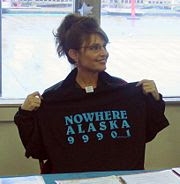 By the way, here's a photo of Palin sporting a shirt that supports funding the $442 million "Bridge to Nowhere"- a measure that she proudly told America she rejected with her "thanks, but not thanks" comments during her first VP campaign speech. No, this isn't photoshopped. It's a real shirt meant to show indignance about referring to sparsely populated Gravina Island as "nowhere".
Ahhhh..... Palin. Kind of hot, but oh so evil.
Posted by J.S. at 2:12 PM

Not that evil....and won't watch the debate tonight either. For same reasons...getting old. McCain is far behind, which depresses me, but all I can do is support and vote. Oh well.

But seriously, does Jim Parsons not crack you up? I remember his antics in the theater department @ KO for so many years that it's hard to see him act like a brainiac on this sitcom....so funny and ironic at the same time. He is awesome.

Jim Parsons really is pretty hilarious on that show. He does a good job acting, and his character, Sheldon, is definitely a unique creation- but Jim's personality also comes shining right through in that character. I really do think that I would still really enjoy the show quite a bit, even if I didn't know Jim.

Be glad you didn't watch--it was a painful debate. Also, who are these undecided voters? I mean, really?

Well, Jill, they explained on last night's Daily Show who the undecided voters are. Apparently it's a section of the voting population largely made up of stupid people and idiots (although there are a few people in there who are just desperate attention seekers as well). Anyway, most of the stupid, idiotic, undecided population won't research the candidates or put any thought about who they're going to vote for until the very last possible second.... and then these idiots will sort of haphazardly cast their votes... and probably decide the outcome of the election.
By the way, good to hear from you, Jill!!

If you give me your vote, I promise to shorten the workweek and put a bowl in every pot!