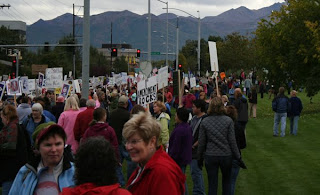 We've all seen the news coverage of Palin giving a bunch of speeches at rallies in front of tons of adoring fans, and we've heard tales of how she's a beloved figure in her home state of Alaska- a governor of the people who truly understand her consituents and who can do no wrong. Well, I guess McCain's strategy for dealing with the media (i.e., whining about how he's treated unfairly until the media are put on the defensive and give he and his running mate far more deference and leeway than they deserve) is working, because this story about the large turnout at an anti-Palin rally in Anchorage last week got almost no coverage. According to this article, the turnout for this "Alaskan Women Reject Palin" rally was one of the largest turnouts for a political rally "in recent memory" in Alaska. It's just kind of 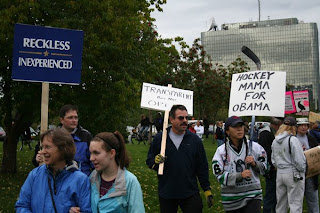 funny that while the rest of the country goes along projecting whatever they want to upon Palin (she's a hockey mom! a hunter! a Christian! she's just like us!), the people who know her best- the people of her home state who have lived through her term as governor- seem to find a lot to fear, distrust, and dislike in Palin. Complaints range from her record on the enviroment to her cozy relationship with the oil companies to her extreme, fundamentalist religious beliefs (with accompanying attempts at book banning, creationism in schools, and attacks on abortion) to simple lack of experience and understanding of foreign affairs and other issues that might be helpful to a potential leader of the free world.
Anyway, I just thought that given the love fest that we've seen at so many McCain-Palin rallies, it's an interesting counterpoint to see that there are still a lot of people from Palin's home state who don't trust her and who don't think she's fit to be Vice President (let alone President). And it's funny that the mean ol' media didn't really pick up on this rally. Personally, despite Republican protestations to the contrary, I think the media looooves the whole Palin phenomenon and helps to drive it (they seem a lot more interested in hyping her image than in looking for any kind of substance behind that image).
Thanks to Jen Shaw for sharing some of these rally images with me.
.......................................
In other news, the weekend was pretty good. On Friday night we had a particularly successful Crack practice. As I said to Sigmund, Crack has that crazy feeling of someone sort of gracefully, and just barely, keeping their balance as they stumble down a flight of stairs. It's sort of exhilarating to observe because you're aware that any moment the whole endeavor could collapse into disaster, but we keep catching ourselves as we're falling, and the motion forward continues, scarcely under control and constantly in danger of falling, until we land, recklessly but still standing, at the end. Anyway, Crack had some moments on Friday, silly and sublime, and once again we became more powerful by some miniscule amount.
Saturday I got up and got my oil changed and went to Barton Springs.
That place is a miracle.
In the Japanese religion of Shinto, beautiful places in nature are thought to be holy and are possessed by spirits called kami- spirits both of nature and spirits of departed ancestors and friends. Shinto encourages its practitioners to go to nature's beautiful places in order to meditate and to commune with these spirits. Barton Springs must possess powerful kami.
It was good to go there this weekend and sort of say goodbye to summer. The sun was warm, the breeze was cool, and the whole place just seemed less crowded and more relaxed than usual (just some quiet laughing and people talking). The water and sun felt great.
Saturday night I hung out with some friends and watched the UT game and talked about the schedule for the upcoming ACL Festival.
Sunday I went to see Burn After Reading. I liked it. It's not necessarily the Coen brothers' best work, but it was really entertaining, nonetheless. It's just one of those Coen brothers movies where a lot of the humor is just predicated upon the idea that you're going to find their quirky characters amusing and interesting. The movie either succeeds or fails for the viewer on that basis (well, there's a complicated spy plot in there somewhere, but as one of the CIA agents points out toward the end, it's pretty hard to find a morality tale or an ethics lesson in the events that unfold). Anyway, the acting in the movie was really good all around, and I especially liked the music (which has an ominous, sinister quality that periodically fools you into thinking you're watching a true spy movie rather than a comedy).
Anyway, the movie falls somewhere between Fargo and Intolerable Cruelty in the spectrum of Coen Brothers movies. Not for everyone, maybe, but I enjoyed it.
Sunday night was Mono Ensemble practice, and we sounded pretty good. We dusted off some old stuff and polished it up a bit, and we had a couple of cool jams. Just a reminder for those who care, but we're still planning on playing from 7:30 to 9:30 on October 2nd at Somnio's, a new restaurant that some friends of ours have opened. We'll also be playing at Somnio's on Saturday, I think sometime in the afternoon, for their grand opening and an art walk. Somnio's is on South 1st between Annie and Mary (map on their web site).
I guess that's about it. Congress is rushing to push through our $700 billion bailout of Wall Street. I feel kind of confused about the whole thing and a little angry that our tax money is going to fix a bunch of stuff that's supposed to be privately run (and to fix a situation which was created by wealthy, greedy, imprudent people in the first place), but to hear the analysts tell it, we really have no choice. So now we're in a position where we have to give more money to people who screwed things up so badly that the entire world economy might collapse if the American taxpayers don't bail these people out. Or apparently that's the situation. I don't know. Grrr......
Ooookay. That's it for now. As a final note, Jamie is in the hospital undergoing some heart tests today, so everyone keep her in your thoughts and prayers.
Peace.

Well that link to the article on the anti-Palin rally said there were (organizers counted?) 1,500 in attendance, which on the grand scale is not really that large.

AND if so many in Alaska hate her and think she's doing a crappy job, then why does she consistently have near an 80% approval rating? She must really be a bad leader if only 80% of the people think she's doing a good job....shame on the media for telling people she's a popular Governor..shame indeed.

Well, for Alaska apparently that was one of the largest turnouts they've had for a rally in a very long time (larger than the turnout in the pro-Palin rally, which got much more press).
And I think her approval rating is largely coming from the fact that Palin is handing out checks to her constituents based on oil taxes that she's charging to the rest of the country (her constituents are getting a check for over $1,200a year off of money that she's charging to the rest of us for Alaskan oil). So the rest of us (in the lower 48 states) get to pay for her to be popular and push through her extremist agenda (not to mention all of the federal money she's been picking up through earmarks, with Alaskans receiving by far the most federal money of any state in the nation for its residents- which once again makes it such a joke when she claims that she doesn't take federal money. It's easy to keep your constituents happy when the rest of the country is footing the bill for that to happen.)