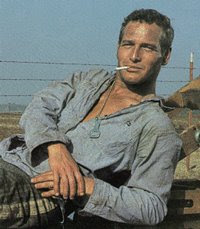 Well, I wasn't going to post until ACL Fest was over (everything is going well so far with the festival), but Paul Newman died yesterday, and I just wanted to mark his passing. Paul Newman has just always seemed like one of those larger than life actors to me- a true star who seemed as cool off the screen as he was on it (he was not only a great actor, but he had several lines of pretty good food products for sale, the proceeds from which went to charity, and he was always involved in other stuff, too, like racing cars). I always just like Paul Newman for his intelligence, his humility, and his wit. Such a cool guy. Anyway, with ACL Fest going on, I'm going to be busy, but I need to plan some time to watch Cool Hand Luke and Butch Cassidy and the Sundance Kid again very soon. I like The Sting, The Hustler, The Color of Money, and some of his other films as well, but Cool Hand Luke and Butch Cassidy are a couple of my favorite all time movies.
Via con dios, Mr. Newman. They're really just not making actors like you any more.

"I have vision, and the rest of the world wears bifocals." -Paul Newman as Butch Cassidy
Posted by J.S. at 12:46 PM

Okay, what is ACL Fest?