The weekend flew by too quickly again. I hung out with Team Bloom, Mandy, and the Whiskeetos a bit, got a haircut from Kellie, took Cassidy down to Barton Springs, and had a pretty good band practice with the Mono Ensemble. It looks like Mono Ensemble may be playing a First Thursday gig at a new restaurant called Somnio's that one of our friends has opened on South 1st on the first Thursday in October (the 2nd). If things work out we'll be playing from about 7:30 until 9:30. The restaurant will be serving some food, but as things stand right now they don't have a beer or liquor license, so it'll probably be BYOB. Anyway, I'll keep you guys posted on that event as things take shape.

It seems like my XBox 360 may have crapped out on me just as I was finally coming close to finishing Grand Theft Auto IV (or I think I was, anyway). Stupid machine keeps freezing up just as it's powering on, when it's still showing the XBox logos and before it even starts playing the game. That sucks. I've had several different Playstations before, and I've never had one just die on me like that (knock on wood). Anyway, that stupid ol' GTA IV game takes like almost 60 hours to finish, which absolutely sucks, because even if I get a new machine I'm probably not going to be able to get my game back. Oh well, maybe it's a cosmic sign that I need to be reading and playing music more and wasting time on videogames less.

Apparently the ol' sister-in-law, Jamie, had a good, safe trip up to Oklahoma over the weekend for a sort of impromptu, Facebook-inspired high school reunion. With Jamie's various health concerns she doesn't get to travel all that much, so I'm glad to see that she had a good time with her old friends.

I sort of scrupulously avoided watching CNN or almost any news this weekend because I just felt like I was sort of overloaded with politics following the conventions of the last two weeks. I did, however, watch The Weather Channel long enough to confirm that Hurricane Ike is currently battering Cuba, but is then predicted to follow a track into the Gulf of Mexico that will likely bring it to the Louisiana or Texas coastline. 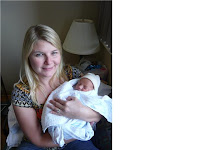 I tell you what- if Mandy's family has to evacuate Beaumont and come back to Austin again, this time I'm not going to miss my opportunity to meet Mandy's new niece, Lia. (Lia was still pretty much a newborn when she was here last time, but if she comes back I might be able to sneak a peek, and yup- that's Mandy with Lia over there on the left). Anyway, I sure hope Ike doesn't hit New Orleans. Those people just can't take much more of this (and Beaumont ain't loving it, either).

What else? Not much. I read another article by Fareed Zakaria wich kind of offered an interesting perspective on the Russia/Georgia conflict. Zakaria thinks that this recent action by the Soviets will ultimately be seen as a big blunder on their part- that former Soviet countries will be driven into the arms of NATO or seek other Western protections following this act of aggression, and that Russia itself will suffer a number of sanctions and both formal and informal retributions from the international community because if its action (all to eventually gain the citizenship of 70,000 former Georgians). Zakaria argues that we need more diplomatic and business ties with Russia rather than less contact with them at this juncture (i.e., we need to fight the urge to isolate Russia) because the more closely linked the Russians are with the west, the more different types of sanctions we will have available to use as punishments or coercive measures for when they step out of line (short of direct military action).

Ugggh. And I just stumbled upon this article about the McCain camp's latest efforts to shut down the so-called Troopergate probe into Sarah Palin's possibly inappropriate use of pressure to try to get her ex brother-in-law fired. This is what happens when I don't watch the news all weekend. I understand that these kind of investigations are sometimes initiated for political reasons, but this one had already been begun and was well underway when the Republicans decided to put Palin on their ticket. They're making accusations that the probe is now being exploited for political reasons. I think the probe is just drawing a lot more attention than they would like because it calls into question the honesty and character of a woman who's running for vice president (and who could quite plausibly be called upon to step into the role of president), but they should have known that this would be an issue when they nominated someone who had an ongoing ethics probe against her. It was naive and foolish of them not to think that this issue would receive a lot of attention. Bottom line- I think McCain and Palin lose all credibility as reformers, fighters of corruption, and as non-Bush style leaders if the first thing they do, before ever taking office, is to sabotage an ethics probe so that one of them can get elected. To quote The Who, "Meet the new boss. Same as the old boss..."
Posted by J.S. at 10:24 AM

What happened to your prior post quote where you mentioned your friend Jennifer told you the politics on your site were getting old.....and you agreed. :) Let's see if you can actually go for 72 hours without blogging politico. Dare to take my challenge? I will do the same on my blog in an effort to show bi-partisan support. :)

72 hours?!?! You do realize that one of the main purposes of me keeping a blog in the first place is so I can rant about news stuff instead of keeping it all bottled up and making my head explode, right?
I don't know if I can do this, and I'm not even sure I should try, but I will try to try... ;-)

Okay I'll negotiate with you.....how about no Presidential/Vice Presidential or election political talk....you can feel free to rant on about any other newsworthy items you see fit, domestic or international. Just nothing having to do with the election for 72 hours. Deal?

wow I certainly did not intend to be the inspiration for a 72 hour moratorium on the presidential election news, but I can't say I'm sorry. I look forward to reading all about you!
And I hope it doesn't kill you.
JK
(a.k.a. Killer Kraber)