Well, last night I was over at Steans Manor with Roundball and McSteans, and we were watching Nova ScienceNow, and this story came on about space elevators and the construction thereof. Ryan and Jamie were kind of surprised to see me get excited and start mumbling under my breath about stuff like carbon nanotubes and buckeyballs. They had forgotten that space elevators and the possibility thereof are a minor preoccupation (ok, obsession) of mine, which I had periodically discussed and argued with Jeff Wilson about as far back as at least 2005.
Anyway, it was cool to see that scientists and engineers are still hard at work on the space elevator concept. In fact, NASA has been sponsoring a contest with a cash prize for people who can design a lift mechanism that runs on some sort of photoelectric power (I guess the idea is that lasers or other concentrated light sources could provide a wireless energy source for photoelectric cells that could convert the energy and use it to power motors for the elevator's ascending and descending containers). Apparently carbon nanotube technology continues to progress, so experts see the material strength problem being overcome in the near future (meaning potentially in the next few years).
Anyway, I'm glad to see that the space elevator concept is still generating excitement and that people are still pursuing its implementation. I wanna book a ride for Crack or the Mono Ensemble to travel up into space on the elevator while rocking out for the entire ride.

In other news, probably less important than space elevators, it sounds like Brett Favre is being traded to the New York Jets. I, like many other Packers fans, I suppose, have very mixed feelings about this. Favre has been more than just a quarterback to Green Bay- he's been a genuine leader for his team (and to some extent, the whole City of Green Bay) in terms of skills, determination, attitude, focus, etc., etc.. On the other hand, Favre has been sort of jerking around the Packers for years now with his flip flopping views on retirement. It's hard to stay focused and work on preparing your team for a pro football season when one of your central figures can't decide whether he wants to play or not.
I love watching Brett Favre play football, but he's become sort of a distraction to the team, and as I've said before, the Packers are going to have to learn how to play without Favre pretty soon, anyway (he can't have more than a couple of seasons left in him). I think it was sort of smart for the Packers to go ahead and get some decent draft picks out of a Favre trade now, while he still has some pretty strong market value, and use those draft picks to help in their rebuilding process. Plus, it was a strong move trading Favre to the Jets- a team which is out of the NFC North and a team which will have some tremendous challenges of their own to face if they're going to make a run for the Superbowl.
In the end, I guess, I still, of course, think Brett Favre is a tremendous athlete, but the Packers are still about more than just Brett Favre. They were a great team before he showed up, and they'll be a great team again (at some point) after he's gone. The choice that the Packers were faced with was to cling to the last gasps of a fairly remarkable past or to put some faith and confidence into the idea of building themselves a new, solid future. I think they probably took the riskier course of action (at least in terms of this season), but I support the decision. Either way, it's clearly the end of a great era of football in Green Bay.

Completely unrelated: a 25 year old school teacher in Heerlen, The Netherlands, named Hanny van Arkel has discovered a previously unknown astronomical object, dubbed "Hanny's Voorwerp" (Dutch for object). The amateur astronomer had been participating in Yale University's Galaxy Zoo project, which provides archived pictures of galaxies to volunteers (via the internet) and asks for help in identifying and cataloging the objects that they see. Hanny 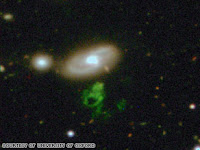 spotted an object that didn't match any of the categories she had been given, and submitted her discovery for classification. To her surprise, the experts weren't sure what Hanny had discovered, either. Their best guess is that the object is probably a cloud of hot gas punctured by a central hole some 16,000 light years across and illuminated by the "dying embers" of a nearby quasar. Still, it was something new, and Hanny got her name attached to it. The Hubble telescope is scheduled to examine it next year.
I just think it's cool that amateur scientists are being given the opportunity to participate in some legitimate research and to contribute to actual scientific discovery. I want to have a star (or glowing gas cloud or whatever) named after me.
Well, I guess that's about it for the moment. I may have more later. Maybe.

I think space elevators are a pretty good idea. What I don't understand is the attempts to wirelessly conduct power to the elevator itself. It seems like finding an efficient use of the fibers to move power to both the satellite and elevator is a more sensible goal. Perhaps a laser might do the trick, but the examples seen on Nova seemed to be proof of concept failure for using concentrated solar power.

I don't think the carbon nanotubes conduct power, so you'd probably have to run some other kind of wiring, and then you would have to worry about disruption in a very long power line, plus you have issues of degradation in the mount of power when transmitting over such a long line (I don't really understand it all, but normal power lines have substations with equipment to help compensate for this- but maintaining such equipment on a space elevator line might be hard). You could carry some kind of fuel to drive the elevator, but then you have to use some of the carrying capacity of the ekevator to lug fuel up and down. I think a wireless power supply is very feasible (maybe for other applications as well), but it has to be a lot less crude than the ones we saw on Nova (and hopefully either the final elevator won't be as jostled by the wind and weather as those prototypes were, or the laser/power source will be able to compensate much more readily than those proto models).