I'm pretty sure it's Kim Bloom's birthday today (I'm not the best with dates), soooooo.....

Happy Birthday Kim Bloom! Kim's a good friend with a good sense of humor, pretty good taste in movies, and a good sense of rhythm (no seriously- you guys should hear her rap). Anyway, she's been a firend for years, buth inside and outside of the courthouse, and especially in the work world she's been a confidant, ally, mentor, and general protector of my sanity for years. Outside of work, she's fun to watch movies, listen to music, and have cocktails with. She also has a name that's fun to say- just two quick syllables.

A couple of quick reviews-


Death Race. Yes, I saw Death Race. Those of you who know me well won't really be all that surprised. I'm kind of the fan of the original, Death Race 2000, which was starred Sylvester Stallone and David Carradine. The first one sorta fell into that "so bad it's good" category, and I guess I kind of felt the same way about this one. I mean, the dialogue is pretty bad, and the plotline is pretty much summed up in the title, but the movie has lots of cool death race scenes with lots of cool fighting, racing, and general mayhem. I mean, make no mistake about it- this is a dumb movie. But it's also sort of an entertaining one if you're in the right mood for it. But you have to like fast cars, gunfights, and watching stuff blow up.


One fascinating thing about Death Race was that I saw it during the middle of the day, and there were a number of families in attendance who had brought their four and five year old kids to see Death Race. I mean, this is a movie that's pretty much promising you that it's going to be filled with violence and gore, and you're bringing your young children to it? More to the point, I feel sort of guilty and stupid in seeing this stuff as an adult, but at least I'm old enough to recognize it as laughable bullsh*t rather than soaking it in as nightmare fuel. You really should be required to have some kind of license before you're allowed to be a parent....
There was a certain amount of irony involved since the movie kind of satirically pokes fun at the American TV audience, proceeding the upon the premise that only the bloodthirsty American viewing audience really makes the events in Death Race possible (in the movie, people pay for a pay per view subscription service in order to watch the actual Death Race, but the whole thing suddenly seems frighteningly more plausible when you see people dragging their four year olds into the movie theater to watch the carnage).

My other short review was of the My Morning Jacket show from Sunday night. The show was good. The band didn't have an opener, and they played a set that was probably over 2 and a half 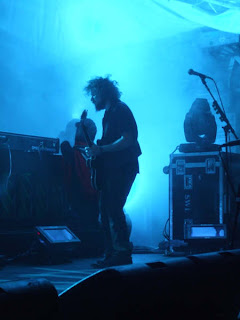 hours long. My Morning Jacket just kind of do their own thing. They're sort of middle of the road musicans- talented enough to keep things interesting, but not really in danger of moving into the virtuoso category. They write good songs with catchy tunes and strong melodies, and they'll use any means at their disposal to convey the emotion that a given song is trying to capture (including everything from guitar effects, vocal reverb, and drum loops to hypnotic, repeating arpeggios, falsetto vocals, and growls). They're just kind of willing to do throw whatever tricks at a song that they need to in order to make it work, and their unerlying melodies are typically easy to enjoy. (photo from 8/24 Stubb's show off MMJ web site)

Their lyrics range from almost childishly simple musings to more profound insights, but they do a good job of matching the lyrics to the tone of their melodies.

Anyway, in the end, the My Morning Jacket show was good. It was hot out at Stubb's on Sunday night and crowded (they need to make that place bigger or let in less people) and it seemed like an awful lot of the UT Greek scene was packed into the amphitheater, babbling away and getting drunk like they were at a mixer (I'm pretty sure that some of the people I saw there never heard a note of the music), but it was still a good show. The guys from My Morning Jacket showed up focused and on a mission to put on a good, solid rock and roll show for almost three hours. I think they succeeded. Say what you want about the drum machines, effects, and cathedral reverb, it's clear that the guys in MMJ love to play their music, and they put forth a good, honest, sincere, high energy show that many other bands would do well to emulate (it was cool to see them play a longer show with no opening band and to carry the whole thing off with such a high level of energy throughout the performance).