So I had dinner with Team Steans last night, and when I got home I watched part of a documentary called Maneaters on the History Channel. The whole thing was about various accounts of lions who were known to stalk and kill humans (as opposed to their normal prey). During the course of the documentary, they told the story of the man eaters of Tsavo, the story of the two lions upon whom the movie The Ghost and the Darkness was based.

For some reason I find the story of the lions of Tsavo endlessly fascinating. It's one of those stories that just couldn't be more entertaining or more incredible if it were written fiction.

Tsavo is a place in modern day Kenya, although in 1898, when the story of the Tsavo lions took place, it was under British control and referred to as East Africa. Apparently in the local African dialect, the name Tsavo is roughly translated to "a place of slaughter". In 1898 Lieutenant Colonel John Henry Patterson, an engineer, was sent from England to Tsavo in order to help build a bridge for a railroad line which was being run through the area. When he arrived in the area he learned that his railroad workers were living in fear and threatening to quit because large numbers of the men had been stalked and killed during the nights by a pair of particularly ferocious, maneless, man eating male lions.

Anyway, Patterson hunted the lions for the better part of a year (the lions left for some period of time, but would always return) and in the end, Patterson claimed the loss of 135 workers who had been killed by the lions (i.e., a combination of Indian and African workers who had been obliged to sleep side by side in tents which were located within the lions' hunting territory- official British records recorded the deaths of 28 Indian workers, but Patterson claims that the rest of the deaths occurred among the African laborers, for whom, sadly, no official records were kept).

Well, Patterson kept memoirs, and they're full of a lot of frustrated, failed attempts to kill the lions (and some scary stories regarding the discovery of dead workers and near misses), but in the end, after hunting the lions for many months, he managed to finally kill the lions one at a time. One of the lions was reported to be 9 feet and 8 inches long, and required 8 men to carry it back to camp.

In the year that it took to hunt and kill the lions, their prowess in hunting men became legendary, and the railroad workers began rumors that the lions were, in fact, evil spirits who had come to visit wrath upon men. They tagged the lions with the names The Ghost and The Darkness- the nicknames from which the movie drew its title.

The dead lions were eventually donated to the Chicago Museum of Natural Science. I guess you 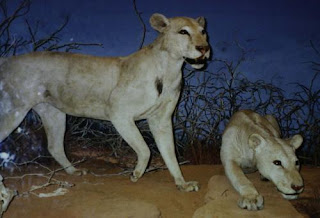 can still go see them (pictured here). The story of the Tsavo lions intrigues me because: 1) it kind of represents modern man encroaching into the last of the undiscovered, natural world and being sternly rebuked for it, 2) it's a story of a relatively recent time when humans had to fear animals on this level (I'm just used to things being the other way around), and 3) it presents a real life story of tremendous personal courage (Patterson went out into the African night by himself with his rifle to hunt two lions who had probably already killed 80 or 90 people at the time that he began hunting for them. The story is made more interesting by the fact that Patterson wasn't a thrill seeking hunter, but a railroad engineer who was compelled by his work ethic and his superiors in London to hunt the lions so that the bridge construction could stay on schedule).

Anyway, I'm not sure why I just rehashed that story, other than, as I've said, I find it endlessly fascinating, and I guess I'm convinced that other people will find it interesting as well if they know about it.

What else? Well, the Russians continue to roll their convoys around Georgia, outside of the South Ossetian contested zone. It's not clear that the Russians have hostile intentions at this point, but between the troop movements and reports that "irregular" Russian soldiers (i.e., volunteer fighters who have crossed the border from Russia or South Osseitan separatists who still have an axe to grind with Georgia) are still engaged in fighting, the Georgians are declaring that the Russians are in violation of the cease fire. The Russians, for their part, are saying that the Georgian military has not complied with the cease fire, and that they should return to their barracks.

So, basically, things are still a little bit tense over there in Georgia. I think we need to get an international peacekeeping force in their as fast as possible to just help stabilize the region and to make sure that neither side takes any "cheap shots" at the other during the peace negotiation process.


That's about it. I took a break from Olympics coverage and watched some early episodes from last season of Terminator: The Sarah Connor Chronicles. I thought it was probably the best new show on TV last season, and it may have even come close to approaching Battlestar in terms of being one of the best shows on TV. It just has some good writing. I hope it stays as smart this season. I also have high hopes for Season 3 of Heroes. I just watched Season 1 of Heroes on DVD earlier this year, but I thought it was really good. Apparently Season 2 kind of sucked, but Jamie, my sister-in-law, says that the producers took the sort of unprecedented step of coming out during the writer's strike and saying that they realize that the show sort of derailed during Season 2. Apparently they pointed out many of the areas where the show had made some bad turns (which Jamie agreed with- I, personally, haven't seen season 2), and they promised to correct their mistakes and to make the show even better during Season 3. These facts, combined with the fact that Season 3 is supposed to focus on super powered villains (which are always more interesting than heroes, to be honest) may end up making Season 3 of Heroes one of the better viewing options for this fall. We'll just have to see.

Okay. Now that I've made this post painfully long enough....

Had not heard of the lions of Tsavo before this post. Going online to read more. Interesting stuff......thanks for the info today!

Also, ditto Jamie's thoughts on Heroes....season 2 wasn't so hot but heard 3 would be great. We'll see I guess!

Sadly, after writing about lions yesterday, I was out in my (especially dark) backyard last night with my dog, and I almost jumped out of my skin when my neighbor's cat jumped out of a tree and onto the roof of Cassidy's dog house. Beware the man eating tomcats of Tejas Trail...!!!!

Did they ever explain why the 2 male lions were maneless?

Apparently there are a group of big lions in the Tsavo area who have no manes. I don't think they're sure if it's a subspecies, mutation, or (and I'm not kidding) male pattern baldness.