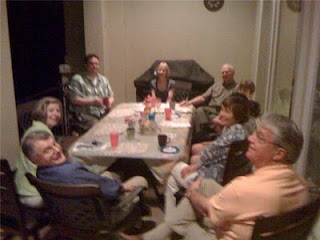 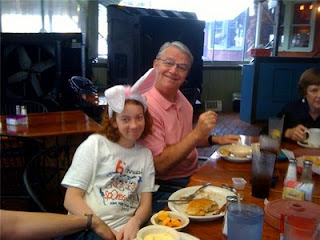 Had a nice Easter weekend with the family in town. Saturday night Mom and Dad had the McBride family and the Neely family over for dinner, along with Susan and Ciara and D.K.. It was a nice dinner and a good time! Sunday morning the Steans family met up once again for some Easter brunch. That's Ciara and Dad in the picture (and part of Mom) at El Arroyo. It was a nice way to spend Easter.
And the whole weekend was pretty good, except for the fact that I'm still really suffering from allergy problems. I guess the whole town is pretty much suffering from allergies right now, though (the extremely high pollen counts were one of the lead stories on the local news), so maybe I can just take comfort in the fact that I have lots of company in my misery. Somehow that doesn't help much, though.
Other from the Easter festivities, I spent the rest of the weekend doing my usual messing around. I spent some more time messing around with my MacBook, working on some recording stuff (although this weekend I ended up mostly working on upgrading stuff on the technical end so that hopefully I can do some better recording in the future), and I watched a movie or two. 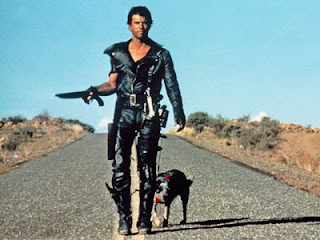 Yesterday, with Ryan and Jamie, I went to see The Road Warrior at the Alamo Drafthouse as part of their classic movie series (IMDB lists this movie as simply Mad Max 2 because, I guess, The Road Warrior was a title really only used to market the film in the U.S.). I've seen that movie a bunch of times, but I had never seen it on the big screen. Despite the fact that I've seen it a number of times, it was really cool to see it again. It's a movie that has a good, tight narrative, and it's actually paced really well. Even though I've seen it many times, it was really entertaining.
And it's kind of hard to say that The Road Warrior is entertaining because it's a grim, grim movie. The last few times I had seen it, I guess I had watched it on television, because I had really forgotten exactly how brutal and ugly some of the parts of the movie really are (and some of the nastiest bits are usually edited out for television).
But the ugliness really is part of the whole point of the Road Warrior, I guess. The whole movie sort of touches on fundamental questions of human nature. In the post-apocalyptic world of Mad Max, humanity is reduced to a race of creatures who are wandering around a burnt out wasteland, fighting for their survival over extremely scarce resources. I remember talking a bit about The Road Warrior to one of my philosophy professors at Trinity. This professor brought the movie up as a stark depiction of humanity living in a "state of nature" as defined by philosopher Thomas Hobbes- a pre-civilized form of existence in which life turns out to be "solitary, poor, nasty, brutish, and short". The question posed by Hobbes, as well as by the movie, actually, is how to best survive when confronted with this state of existence. The answer, for both Hobbes and for the humans who are struggling to escape the wasteland in the movie, is to develop a new society (i.e., establish a civilization) with a form of social contract that puts an end to the brutality and constant violence of a "survival of the fittest" style of living. Of course, before such a society can be established, people's better instincts have to prevail- they have to come to want such a society and to believe that both the group as a whole and the individuals within it can and will fare better for being a part of such a society.
And Road Warrior sort of shines a spotlight on these themes and philosophical questions. Max wanders the wasteland and develops the skills to be a successful survivor amongst the bandits and marauders of the post-apocalyptic Australian outback, and it takes a while to convince him that the establishment of a new civilization is a plan worth supporting (or, perhaps, that it's even a realistic option at all). Max is sort of a classic figure in the Hobbesian hypothetical- a figure who feels like he has the strength and resources to be successful in the wasteland on his own (while recognizing that "success" in the wasteland may still not add up to a very nice life), and who is weighing that belief against the risks and potential benefits of aligning himself with a fledgling civilization- a civilization which is by no means guaranteed to survive (and in the movie, given the fact that the settlers are beset on all sides by some really nasty bandits and killers, this new civilization doesn't even seem particularly likely to survive).
Of course, in the end Max ends up helping these people escape the marauders so that the settlers can go on to try to create a new life and civilization for themselves, but it's interesting to note that once he's helped them escape, Max doesn't join the settlers. Instead, he returns to the wasteland.
I'm not sure what this means. Most certainly, Max is a conflicted character. He likes the people from the settlement, recognizes the importance of dealing with "honorable" people, and he seems to have a great distate for the marauders. On the other hand, Max has suffered tremendous personal tradgedy (his family was brutally killed by bandits in the first Mad Max movie), and maybe Max has simply become too cynical to really believe that a new society can be established. He might think that the establishment of a new society is ultimately a pipe dream amongst all of the nasty, brutish humans who are fighting for resources in the wake of the apocalypse. Or perhaps, having failed to protect his family in the first movie, he may simply be wracked with guilt and feel unworthy of a new, productive life within a new society. Or maybe he just needs to wander back into the wasteland so he can kick more marauder butt (and make some more money) in the third movie, Mad Max Beyond Thunderdome.
Anyway, it was good to see The Road Warrior again. No matter how many times Mel Gibson does stupid things (gets arrested, makes anti-Semitic and sexist comments, etc.) and no matter how lame he gets (and he's gotten pretty lame in recent years), I'll always have to at least take my hat off to him for The Road Warrror.

By the way, I also saw the new Roman Polanski movie, The Ghost Writer, last week. It was pretty good. For those who don't know, it was about a writer (Ewan McGreggor) who is ghost writing memoirs for a former British Prime Minister (Pierce Brosnan). During the course of writing the memoirs the Prime Minister comes under investigation for possible war crimes, and the ghostwriter uncovers evidence of CIA involvement and political intrigue.
It was a good movie. Polanski still excels at creating mood and atmosphere, and the plotline was pretty interesting. Kim Cattrall plays the prime minister's professional assistant/mistress, and she did a really good job with the role. Olivia Williams did a good job as the prime minister's wife. Anyway, it wasn't the most brilliant movie ever, but it was a good, solid film where the director actually gave his actors some room to work and the plot actually made some sense.
Oh yeah, by the way- even though I liked the movie okay, I still totally think Polanski is a criminal, and I'm not one of those people who thinks we should give him a free pass. He did some bad things (in addition to giving drugs to and having sex with a girl who was under age, the girl also testified that she told him she didn't want to have sex), and he never served his sentence, so I say let him stay a fugitive.
Well, that's it for now. I hope everyone is doing okay. Talk to you later!
Posted by J.S. at 8:46 AM