Hey! Hope everyone is doing okay.

My brother, Ryan, is starting a new blog again. I'm not sure exactly how it's going to look or what it will contain by the time he's done with it (he's just sort of getting it off the ground, and there's not much to it yet), but knowing Ryan, it'll probably be an interesting, entertaining read. It's called The Signal Watch (apparently a reference to the wrist communicator used by Jimmy Olson to call Superman), and you can check it out here. 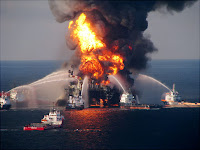 Well, an offshore oil rig called the Deepwater Horizon caught fire and sank off the coast of Lousiana in the Gulf of Mexico this week. Eleven oil rig workers remain unaccounted for, and oil has been leaking into the ocean following the initial explosion on the rig at a rate of about 8,000 gallons a day.
I don't mean to kick people when they're down, but I gotta think that this can't really be very good for either the oil industry or for President Obama, who recently announced a new plan to allow open up new areas for offshore oil drilling along the Atlantic Coast of the U.S. and in areas around Alaska. Part of Obama's justification for allowing offshore drilling along U.S. coastlines (and part of the reasoning that the president used to try to pacify angered environmentalists) involved the use of new technologies for offshore drilling which supposedly present a much smaller risk of environmental disaster and offer a reduced environmental impact as compared to the practices and technologies which were used for offshore drilling in prior decades.
But now the Deepwater Horizon has gone down, and we're all reminded that even one disaster on a big oil rig can have some really nasty results.
My thoughts go out to the lost rig workers and to the rescue crews as they try to save lives and clean up the mess (and the spilled oil). I've always been pretty wary about offshore drilling, and, in general, I'd rather avoid it if possible, but I also recognize the fact that oil pretty much drives our whole economy, and, in fact, our whole society. Oil has gotten us this far, and I think it would be kind of hypocritical and disingenuous to pretend that we didn't need it (or really, really appreciate it) up until this point. Still, we need to get away from our reliance on oil. Additional offshore drilling is just prolonging our inevitable need to confront our energy crisis, contributing to carbon gas emissions, and, as this incident points out, posing a danger to our environment.
Not sure I'm onboard with Obama on this one. I'm not sure that America is going to get truly serious about clean energy so long as we're also simultaneously working to squeeze every last drop of fossil fuel out of the earth.

What else? Rick Perry was ont he cover of Newsweek last week (or this week? I'm never sure) in a series of articles that covered not only Perry, but a number of other issues related to Texas (from the whole Texas textbook fiasco to the Texas economy to Texas politics). In general, I found the articles a little disappointing. Newsweek has seemed to lean farther and farther toward the left in recent years, which I'm okay with, but the articles just didn't have much depth or analysis to them. They described Texans as being a bit backward, very conservative, fearful of outsiders and "elites" from both the east and west coast, and convinced (without much evidence, according to the authors, of the "exceptionalism" of Texas). The article pointed out that whites are rapidly becoming a minority in Texas, but it also pointed out that whites continued to be a significantly stronger political force than Hispanics and other racial groups which had yet to truly flex their political muscle within the state. Also, the article pointed out that the Texas economy remains one of the strongest in the nation, with more businesses moving to Texas than to any other state over the last few years and with Texas home prices holding their value throughout the recession much better in Texas than in many other places.
I guess that a lot of this stuff is might be new information to the rest of the country, but living in Texas, most of this information didn't amount to much of revelation.
And even though the writers seemed to be enjoying themselves as they pointed out the silliness of talk about a Texas secession or the backwardness of a state which insists upon including the creator of the yo-yo in its textbooks while downplaying the importants of minority rights leaders like Cesar Chavez, I think the authors missed a lot of other, even more important points.
Despite our robust economy, a lot of the wealth in this state doesn't help to improve the lives of its residents- our schools are consistently rated as being mediocre, our healthcare system has serious problems- with mental health services being especially poor, our jails and prisons are terribly underfunded- to the point where we periodically just have to release a lot of prisoners because we can't hold them all, and so on and so forth. Texas is a state where the wealthier just keep getting wealthier, and a lot of the rest of the population just struggles to hang on (while new businesses move to Texas in order to take advantage of the fact that they don't have to pay taxes that mioght fund social services). Essentially, if you've got money and you live in Texas, it's a great place to be, but if you're poor or in need of any kind of social services, probably not such a magical place (and I'm not just talking about unemployed people- there are a whole lot of "working poor" people in Texas who put in 40 or more hours a week and just barely manage to scrape by).
Anyway, I guess I was a little disappointed that the article didn't do a better job of exploring the relationship between the strong economy in Texas and the standard of living that Texas citizens enjoy. A good part of the article just seemed to kind of laugh at Texas for the usual reasons without taking a hard look at why Texas is attractive to so many businesses and people who live outside the state.