I don't have too much to write about, and once again, I'm a little swamped, but I wanted to get a quick post in, anyway.
I have a couple of pictures to post, anyway. 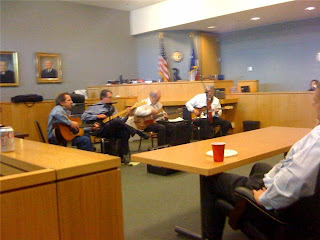 This first one is from last Thursday at lunch time in the 167th District Court (which is felony court- I don't really practice there anymore, but I did for almost seven years before becoming a prosecutor). Judge Lynch has been around Travis county a long time, and he knows that a lot of the lawyers who appear before him have other talents and interests outside the law. Judge Lynch has instituted a sort of talent show type of thing on a monthly or semi monthly basis in which lawyers come and show off their talents or hobbies in his court, and people come eat a sandwhich and enjoy the performance or presentation. This first one involved some lawyers who are really good country/folk singers, all of whom who have performed on a professional or semi professional basis at some point. Left to right you have Bobby Earl Smith, Wade Russell, Polk Shelton, and Judge Leon Grizzard. They had some really good material, both covers and originals, and all four of them were pretty good singers!!
Anyway, it was a really cool experience and a good reminder of why Travis County is the coolest place in the state (and maybe the country?) to practice law. We have a really good community full of cool people who have a wide variety of interests who all get along pretty well (even though we argue with one another for a living). And now we have a felony judge who encourgaes us to make music in his courtroom. So very, very Austin... 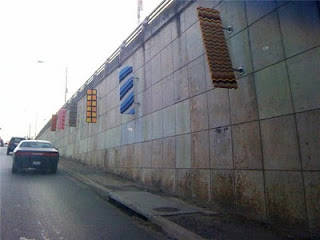 And speaking of the coolness of Austin, this week (maybe in celebration of art week?) these colorful, knitted pieces of art appeared upon some signs on South Lamar on my route to work. The original signs (the ones covered up) are supposedly art themselves, but they look like really bland roadway markers. I thought they were just blue warning markers to keep large vehicles from hitting the concrete walls until I read an article in the paper a couple of years back that explained that they were supposedly art, and the city had commissioned them for thousands and thousands of dollars (which is lame). Anyway, I love the new, colorful art, and it's been kind of making me smile this week as I pass it on my way to the office in the morning.

Well, that's it for now, I think. Maybe more later if there's time, but if not, have a great weekend!

P.S.- And I just found out that our good family friend, Jim Bridenstine, is going to be taking part in a demonstration event for his rocket racing team this weekend in Tulsa, Oklahoma. I don't know too much about it, but the rocket racing involves former military pilots (Jim's a former Navy pilot) racing really fast rocket powered planes through a kind of complicated course. It's the sort of thing that I would never, ever attempt outside of a videogame. So here's the link. Looks like they're going to be doing a live video feed to the internet of this thing on Saturday.
Posted by J.S. at 10:24 AM