Hey!
Well, it's my brother's birthday (see the other post for today), so once again, happy birthday to him today!
Hope everyone had a good weekend!
Mine was pretty good.
Let's see, what did I do.... 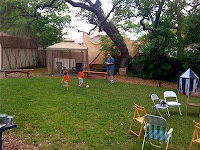 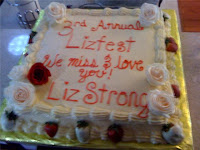 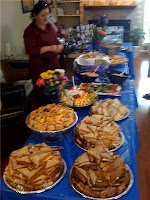 On Saturday I went to DK's third annual LizStrong party, in celebration of her partner (and my friend), Liz, who passed away several years back. It was a really nice party, and I'm sure that Liz would be thrilled to see so many of her friends and family gathered together to remember her and have a good time! (note the picture of Ryan entertaining the kids at the party. Kids love a giant. Even a giant who refuses to put down his Smirnoff Ice long enough to play a proper game of catch with them) 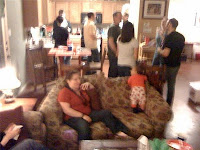 Later on Saturday Ryan and Jamie had a few of their friends over to have a few drinks, and I stopped by for that. It was cool! I got to meet some of Ryan's work friends (and other friends) that I hadn't met before, and I saw a couple people that I hadn't seen in a really long time. It was a good time.

Sunday I went to see Hot Tub Time Machine. It was pretty funny, and more or less what I thought it would be, although maybe with a bit more of a dark undercurrent than I was expecting (nothing too major, but the characters had backgrounds that were sort of depressing, and some of the partying was a little more hardcore than I expected). Anyway, it was a fun movie.


We also had Mono Ensemble practice yesterday, and all five of us made it to practice for the first time in quite a while. It was a pretty good practice. For not having all played together in quite some time, I thought we sounded pretty good. 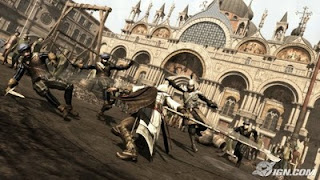 What else? I got a new videogame. Assassin's Creed 2. It's pretty cool. The game's story revolves around Ezio Auditore da Firenze, who lived during the Renaissance period of the late fifteenth century in Italy. Ezio's father and brothers are wrongly executed after ebing betrayed by political enemies of his family, and Ezio takes on the role of an assassin, trained by his family's allies so that Ezio may extract his revenge (and hopefully bring an end to some Italian political corruption in the process). 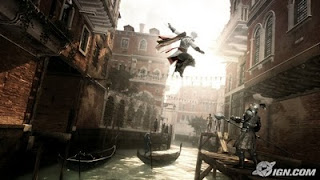 Anyway, the game has good gameplay, and a plot which is more involved and interesting than the plot in the first Assassin's Creed game. Mostly, though, I'm impressed with the game's art, which is pretty fantastic. The game involves fantastic depictions of cities like Florence and Rome during the Italian Renaissance, and the renderings of both the environments and the characters are just beautiful to look at (and climb over and fight your way through and...). Standing in front of

my high def TV and playing this game is an experience that's immersive to the point where it can literally be dizzying (especially as you run along rooftop ledges or whirl your way through chaotic combat sequences).


Other from all of this stuff, I did a little bit of playing and recording on my own this weekend. Did a little bit of recording with my new computer. I'm not sure how the final products are coming out, but I'm enjoying the song creation process on the new MacBook.


What else? More kudos to President Obama as a he kicks off his nuclear arms reduction summit this week. The President may have been awarded his nobel prize prematurely, but he's really been working overtime to legitimize it lately as he's announced new American policy positions on the use of its nuclear arsenal, made agreements with Russia about reducing the number of nuclear weapons in both countries, and is now hosting this nuclear nonproliferation summit. I guess it's pretty easy to be cynical about how much progress the president will really be able to make in reducing the nuclear threat (it's obviously a pretty daunting task), but at least Obama is moving in the right direction and demonstrating to the world that the U.S. has a very real interest in (and dedication to) nuclear arms reduction and nonproliferation. Keeping the threat of nuclear weapons under control around the world really does seem like a project that's going to require a coordinated effort on the part of the global community (not only in terms of nonproliferation, but also in terms of keeping track of these weapons and preventing them from being trafficked), so I think it's a great thing that President Obama has been determined to keep the U.S. in a leadership role.

And you know what else is good? Just seeing president Obama constantly working so hard on so many things. Seems like a big change from the Bush years, when it seems like all we ever saw were pictures of the president clearing brush and wandering around on his ranch out in Crawford (President Bush made over 65 different trips to Crawford during his time in office and spent more than 418 days at his Texas ranch- meaning he spent at least 1 out of 10 days during his presidency out at the ranch- and that's not counting time that he spent at Camp David or other vacation spots). Anyway, if conservatives were coming to their opinions about the efficiency and effectiveness of government on the basis of Bush's work ethic, it's no wonder that they were so bent out of shape about giving tax dollars to the government. Obama, on the other hand, seems like he's constantly busy and sort of everywhere at once. Whether he succeeds or fails on individual struggles, it's refreshing to see that sort of energy in the White House again.

Well, that's it for now. Hope you guys are enjoying the beginning of your week!
Posted by J.S. at 8:50 AM