Howdy!
Well, it was a really good weekend. I thoroughly enjoyed it.
Friday night I went to see the Flaming Lips at the Austin Music Hall with Ryan (I also met up with Kim and Sigmund Bloom once we were there, and saw Mark McCrimmon and other courthouse friends once we were there as well). 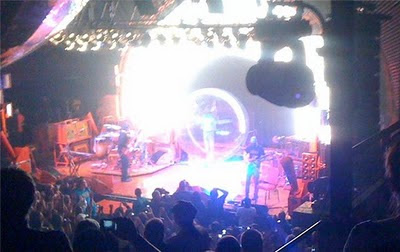 The Flaming Lips put on a really good show. I've seen them a few times before, but they always just make me happy (the whole theme of their shows, with all of the confetti, lasers, balloons, and constumed dancers, typically revolves around the idea of working really hard to enjoy life as much as you can). In the picture above you can see Wayne Coyne coming out on stage in his giant bubble. My only small complaint about the show is that the sound at the Music Hall is still a little muddy. I like the Music Hall from the standpoint of having balconeys and bleachers and giving people plenty of good ways to get a look at the band, but the place is still essentially still a big, metal warehouse with very little attention paid to the acoustics. The sound was better this time than it's been for some past shows there, though.

What else? Well, in no particular order, I spent the weekend seeing a couple of movies (Green Zone, and Alice in Wonderland), hanging out with friends, listening to music in my backyard while enjoying the beautiful weather, making music, having breakfast with Jamie, and attending a birthday party for a young friend of mine (happy birthday, Dash!). The weather was beautiful, and I got to hang out and have a good time with a lot of good friends this weekend, so it was a great time!

Green Zone was an interesting movie to watch, especially right after Hurt Locker was handed the Academy Award for Best Picture of 2009. In some ways, the movies have a lot in common. They're both movies about the Iraq War which are, in essence, meant first and foremost as action/adventure films (meaning, it felt like the primary goal of both movies was to entertain). Both movies were fairly fast paced and filled with lots of adrenaline-fueled battle scenes and fighting. Green Zone probably felt a little more contrived and artificial than Hurt Locker, but not overwhelmingly so.
The biggest, most readily obvious difference between Hurt Locker and Green Zone was the fact that while Hurt Locker really went out of its way to avoid any sort of overt political message about the Iraq War, Green Zone went in completely the opposite direction- hinging its entire plot upon questions about the reasons we went to war in Iraq and whether our government was morally justified in sending our troops into combat.
Don't get me wrong- Green Zone isn't a movie that centers exclusively around politics (it doesn't just involve a bunch of suits sitting around arguing), but the fast paced actions fight scenes and hyperkinetic battles all serve an ultimate end of uncovering the truth behind our government's alleged search for weapons of mass destruction (a search which served as the pretext for our invasion). We still get to see our soldiers out in the field, fighting hard to do the right thing, but we also see politicians, reporters, and intelligence officials all trying to manipulate the course of the war in order to serve their own ends. While Green Zone may have seemed a little more artificial than Hurt Locker (it's plot was clearly tailored to make a point), Green Zone also made me realize that Hurt Locker really let American audiences off the hook- it allowed them to avoid any sort of moral judgments about whether or not the war should have been fought in the first place while still providing a compelling picture of our soldiers in combat. Hurt Locker made it entirely possible to watch an entire movie about the Iraq War without ever having to really stop and think about the Iraq War in any sort of critical way (except, maybe, to vaguely question the effects that the war might be having on the troops). This doesn't mean Hurt Locker is a bad movie, but its conspicuous determination to avoid "big picture" questions made me a little surprised when the film was nominated for (let alone won) Best Picture.
Then again, I've said that the only thing that keeps the Oscars relevant might be the fact that it serves as a sort of mirror that reflects the momentary tastes and values of the American audience at the time when the awards are handed out every year. Maybe the fact that we picked a film for Best Picture in 2009 that depicts the heroism of the Iraq War without facing its harder, more controversial questions really is pretty telling in showing what the American mindset was in 2009. In 2009 we finally just decided that we wanted to celebrate an American hero or two, and we just didn't want to think too hard about the events that put our hero into the middle of the fight in the first place. Maybe we were worn out by years and years of questions, or maybe we just didn't want to contemplate issues that might undermine America's moral authority.
Anyway, Green Zone runs right at those questions, providing us with another heroic American soldier who is exceptionally good at his job, but this time our hero is every bit as interested in finding the truth and doing the right thing as he is interested in simply carrying out orders (and this message isn't exactly subtle in Green Zone- there's even a line in the movie where one of the characters tells our protagonist, Chief Miller, that, in the end, it doesn't matter why we went to war. Miller yells back at him that the justification for going to war is really the only thing that matters. In some ways, I think that little conversation might sum up some of the differences between Hurt Locker and Green Zone).
Anyway, politics aside, I found Green Zone to be a pretty good, entertaining movie. I wouldn't really call it a great movie, but then again, I wouldn't have called Hurt Locker a great movie, either, and now it's been named as the best movie that America made in 2009.

I also saw Tim Burton's Alice in Wonderland. It was pretty good, I guess. I just don't feel like I have a whole lot to say about it. It felt a little rushed at times- sort of like you had been dropped in this magical place, but then rushed through it without much of a chance to really see all of it or truly appreciate it. I don't know. It wasn't a bad movie, but I don't think it's going to be one that sticks with me especially well, either. I'm not a huge Disney fan (I mean, I like Disney ok, but I know some people who are huge Disney nuts, and I don't fall into that category), but I still think I like the Disney version better.