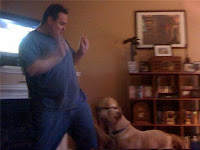 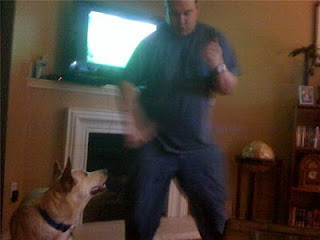 So here's Ryan showing Scout some moves. I think Scout is sort of trying to figure out what sort of response this new behavior merits in terms of fight or flight reactions...

Ryan and Lee have been discussing this video via email and discissing whether it should be considered an artistic success or failure. Lee maintains that it's a success, although he also claims it should have been accompanied by music, preferably Loretta Lynn's "Don't Come Home a Drinkin' with Lovin on Your Mind" or Merle Haggard's "The Fightin' Side of Me." Somehow I find it disturbing. But it also somehow seems sort of appropriate for a Monday.

What else? The weekend? Well, you saw the pictures of Ryan and Scout dancing. Went out to dinner with DK and Team Steans on Saturday to celebrate DK's birthday. Sunday I got together with Reed to watch the U.S. lose in overtime to the Canadians for the Olympic gold medal in hockey. Oh well. Before the Olympics started, everyone was pretty much saying that the Canadians were going to dominate hockey this year (the Canadians have a lot of really good professional hockey players on their team. The U.S. has some, too, but it was assumed that Canada was the dominant team). Anyway, the Canadians were supposed to be really awesome, but the U.S. really looked every bit as good as the Canadian team. We beat them earlier on in the qualifying rounds, and we took them into overtime in the final game. Either team really could have come out on top, so the U.S. team really did us proud. Overall, it was just some really classic Olympic competition and some great hockey.

Anyway, after the game we played some music for a while, and that went pretty well, too. Other from that, the weekend was spent at the dog park with Cassidy, playing guitar in my back yard while enjoying the beautiful sunshine, and doing a little shopping with Ryan.

I also watched some coverage of the major earthquake that hit Chile. That thing measured something like 8.8 on the earthquake scale (we no longer use the Richter scale, apparently, but I haven't heard a name for the new measurement system). Anyway, because the earthquake scale measures earthquakes in exponential measures of magnitude, the 8.8 earthquake in Chile was actually 500 times more powerful than the quake that hit Haiti, although the death toll is likely to be much lower, killing hundreds instead of over 200,000 as occurred in Haiti. The difference in the death tolls is said to primarily be related to the building codes (or lack of them) in Haiti, which used non-reinforced concrete while Chile (which is more experienced with earthquakes) had stricter building codes and, therefore, buildings which mostly withstood the quake much better than the structures in Haiti. Kind of crazy. It makes you realize that the deaths which result from earthquakes are, to a large extent, deaths which result from the success or failure of human building practices as much or more than from the natural disaster itself.
Anyway, the whole earthquake thing has been sort of crazy lately. There was, of course, that bad Haiti quake, and then a 7.0 quake off of Okinawa, Japan, that struck on Friday, and then this Chilean quake that hit on Saturday. Seems like there's some serious activity going on along these earthquake zones. It just sort of makes me wonder if this is going to continue to be an ongoing phenomenon for a while- a sort of chain reaction as pressure is shifted from one point to another following these quakes. Scary stuff.

And there's an article on CNN today about whether the Toyota recall is going to end up ultimately hurting all of the Japanese auto makers. For the short term, it looks like Honda and Nissan might end up receiving some benefit by the Toyota recall- picking up some Toyota customers who have become wary about buying Toyotas as these acceleration and brake problems get sorted out. In the long term, though, there's some question about whether the Toyota recall has damaged the excellent reputation that Japanese maufacturers have enjoyed in terms of the reliability and safety of their vehicles.
And it took a while (longer than I would have thought, actually), but I heard a story on NPR toward the end of last week where some Japanese auto industry analysts had begun to question how much of the media hysteria surrounding the Toyota recall was related to the actual vehicle defects versus how much of it had been a PR campaign against the Japanese auto makers so that flailing U.S. car companies might have a better chance at regaining a stronger foothold in the market. Given the fact that engineers still haven't really been able to come up with one solid, single problem to attribute the acceleration problems to, and the fact that, on the whole, Toyota has a safety and reliability record which has historically ranked up there as being among the better manufacturers on the market, it has just seemed like the media hype surrounding the sudden acceleration problem is kind of disproportionate to the scale and severity of the problem itself. And, of course, negative coverage of Toyota can only help to benefit American car manufacturers. More important than the specific safety problem that Toyota now faces is a larger shift that has occurred as Americans begin to see problems in a safety record among Japanese auto makers which had previously been all but unblemished. (and if Japanese cars have problems, too, why not just buy an American car?)
I have to admit that I find the whole thing a little suspicious myself. It seemed like an awfully lucky coincidence for U.S. car makers (who've been pretty much on the ropes and fighting for their lives) that Toyota suddenly developed a safety issue that garnered huge amounts of media attention just when our American auto makers really needed to catch a break in order to survive**. It's almost as if Americans had just decided that we couldn't make our cars well enough to make them more competitive with Japanese models, so instead, the impression has been created that Japanese models were never all that great to begin with. It doesn't even really matter what the particular risk might be that any particular buyer might face by driving a Toyota. More important is the media storm which has created a popular notion that only a fool would buy a Toyota right now.
So I'm being a bit paranoid here and conspiracy driven. I'm probably way off base. But still, I have a hard time ignoring some nagging suspicion. And I put very little past corporate America- especially when the fate of such an important industry is at stake.

Well, that's it for now, I guess. Hope you guys are off to a great start this week!

Oh, yeah! Don't forget to vote in the election tomorrow! Help decide who the new judges are going to be that I work with!

** Addendum: This is what I'm talking about. Toyota takes a big hit in sales after this recall business, and Ford rockets past them into the number one sales position for February. I'm not necessarily claiming a conspiracy between the media and the American auto makers, but all of this negative attention for Toyota sure has given the Americans a much needed boost.