Hey!
So last night I went with Ryan, Jamie, and Jackbart to the screening of a movie called Birdemic: Shock and Terror.

The movie was.... very enjoyable. I mean, it's a movie about mutant birds that attack a seaside community (including a software salesman and his girlfriend- who happens to be an fashion model), apparently because of global warming. What's not to like, right?
Anyway, the movie is ostensibly a romantic thriller, but it mostly ended up delivering a whole lot of laughs because of the acting, the dialogue, the direction, and the script. 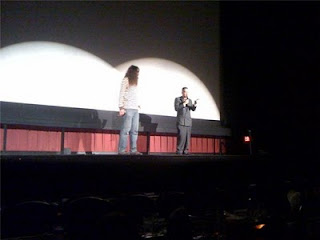 The awkward part of going to this screening (at the Alamo) was that the director, James Nguyen, was there. Not only was the director there, but he stood up to explain his film and to field questions both before and after the movie. And it was pretty clear that this guy never meant for this film to be a comedy or to be ironic or anything of the sort. He was deadly serious about trying to make a Hitchcockian thriller with real points to make about global warming and the environment. So here's this guy who's standing up to tell us all about how he's poured his heart and soul (as well as a lot of his own money and a couple years of his life) into the making of this movie, and then we're all there laughing at it. I mean, I actually tried not to laugh in the beginning, but the thing was just too funny to not laugh during large parts of it (I mean, seriously, if the director hadn't been there telling us that he made this movie in total seriousness, I would have thought that the thing had been made with the intention of being funny).
So the experience was sort of weird because I really enjoyed the movie, but felt a little bad for the director.
On the other hand, Nguyen did manage to get his movie made, sold it to a small studio (after living out of his freezing cold van and trying to sell the film to studios during the Sundance Film Festival), and enjoyed a screening where a sold out crowd thoroughly enjoyed his movie (although not necessarily in the way that he intended). There was lots of applause for Nguyen both at the end of the film and after he spoke to the audience. He swung for the fence, and while the product didn't exactly end up being the dramatic masterpiece that he intended, he still succeeded on some sort of Roger Corman-esque, cult film sort of level. On the way out of the theater, I stopped to shake the man's hand and to tell him that I thoroughly enjoyed the movie- which was the absolute truth.
So, weird experience. Everyone watch Birdemic if you get a chance. It might take a little while to suck you in, but it's a pretty good flick.

What else? Sounds like the Democrats are finally going to try to push through their health care reform package by using reconciliation rules (which would provide for an up or down vote, but which is only mean to be used to pass pieces of legislation which are relevant to the budget). Good! This move is way overdue.
The president continues to try to attract bipartisan support, and toward this end he has offered to include some Republican ideas into the final bill. The president is a better man than me. He apparently still believes that bipartisan cooperation is possible and that some consensus can be reached. He also probably believes (perhaps correctly) that strong arm politics and a go-it-alone strategy on the part of Democrats might only make the bitter, partisan divide in this country that much worse. Personally, I've long since reached the conclusion that the Republicans aren't going to cooperate or give an inch unless they're afraid that Democrats can demonstrate Republican ineffectiveness or threaten to hurt them in some more significant way down the line (I guess I've sort of become convinced that the current version of the Republican Party will only respond to a display of force and very little else).
I actually hope that Obama is right and that I'm wrong and that the Republicans at some point might start responding to reason and demonstrate some sort of willingness to cooperate. But I don't believe that's going to happen in the foreseeable future. I think that the Republicans are only going to respect the Democrats and engage in bipartisan negotiation if they think that the Democrats can hurt them in some way. In keeping with this belief, I think that the Democrats should have pushed this health care reform package through long ago- regardless of bipartisan support (and with the arm twisting of conservative Democrats where necessary). I think the only thing thatls going to sell health care reform to Americans will be to see it actually working fairly successfully (without the sky falling and the world coming to an end), and in order to have given the public some time to adjust to the idea of a reformed health care system before the midterm elections, the Democrats should have pushed this legislation through as early as possible. As things stand now, even if health care reforms ultimately prove very popular (and they just might), the public still won't have an idea about whether or not the new system is working come election time. The public may end up lashing out at the voting booth against Democrats for defying the "will of the people" on the health care reform issue, even though, in the end, Americans may ultimately come to appreciate the changes that reform may bring.
And, of course, it's not even clear that this reconciliation thing is going to work. Apparently a parliamentarian or someone gets to decide which parts of the bill can be addressed through reconciliation. So we may only get part of health care reform, or maybe none of it at all.
Arrrgh.

What else? Elections in Texas last night. Rick Perry is the GOP nominee for governor. I have to admit that he's been in charge while Texas did a pretty good job of successfully navigating its way through a bad recession (our job losses and economic damage have been a lot less here than in other states). On the other hand, Perry seems to develop this economic success by sacrificing the quality of life of his own constituents. Texas has serious problems with its education system (we're in the bottom half of the nation in terms of graduation rates and rank 46th or lower for SAT scores), our health and mental health services are severely underfunded, we lock tons of prisoners away, but then don't have the money to successfully house them, and instead of protecting our environment we spend time doing things like challenging the EPA on whether or not carbon gas and other emissions are harmful (Really? Our leaders are spending their time trying to make it easier for companies to pour more crap into our air? Really?). And in his free time Rick Perry seems to enjoy personally interfering with the justice system in order to obstruct investigations into the execution of men who may have been wrongfully convicted (because, gosh, that might somewhat undermine his pro-death penalty stance).
I mean, working class Texans don't really need to get their children educated or actually be able to hold violent criminals in prison so long as we can lure corporations into our state with the promise of greater profits for stockholders and business owners, right?
Plus, Perry has a great sense of humor- it's second to none! Remember when he "jokingly" hinted about the possibility of Texas seceding in order to pander to a bunch of right wing, anti federal government nutjobs while speaking at a rally? That stuff is hilarious! Especially when that sort of rhetoric inflames anger among the same crowd that eventually start venting their frustrations by flying planes into IRS buildings....
Anyway, there are a lot of people out there who think that Perry is going to be making his run for president in 2012. Isn't that great? Perry has used every available opportunity over the years to make sure that he tries to pin every evil in the world on "Washington insiders", but now he's going to fix our county's problems by moving to Washington to become the most powerful Washington insider in the country! That is so cool! I totally get that!