Hi, guys!
Well, let's see.... I had dinner last night with Kate and Mandy over at Madam Mam's. It was good to see both of them. Camille is coming into town some time today to collect Mandy and whisk off to Kerrville to visit her parents this weekend. (I hope I'm not giving away details of your personal life, Mandy, but I just thought the Adventurers might like to know, in general, what you're up to) Kate has been working for a new branch office of her lawfirm down in Houston a lot lately, but it sounds like it's starting to wear her out a little bit (of course, when Kate has had free time here in town, she's been working up in her attic, I think on insulation or something, during one of the hottest Junes on record in Austin)
Anyhoo, nice to see Kate and Mandy, and the food at Madam Mam's seemed especially good last night. Maybe it's just because I haven't been there in awhile.

Cassidy is doing fine after her dental surgery yesterday. Somehow she had managed to shatter a tooth that had started to get kind of nasty, so it had to come out. She's got pain meds and antibiotics, and she's doing just fine now, though.

The Karebear and The Admiral are scheduled to come into town this weekend for the July 4th holiday and to check on the construction status of their new house out in Steiner Ranch. I'm sure they also want to visit their Austin friends.

And the U.S. is probably one step closer to war with Iran after issuing a general warning that the U.S. will not tolerate any act by Iran that blocks transport through the Straight of Hormuz, a passageway which 40% of the world's oil is shipped. Now I'm not here to say that we should roll over for Iran or let them bully the rest of the world by manipulating international oil supplies. On the other hand, if there's a sort of belligerent, insecure, angry kid in your class who already doesn't like you and who's made it clear that he's not going to put up with any aggressive behavior from you without getting into a fight (you know this kid- he's kind of a loser, but he's constantly worried about looking like a wuss in front of the other kids, so he's always trying to prove how tough he is), then is it really a good idea to go around issuing challenges and ultimatums to this kid in front of the entire class? Well, this kind of behavior seems to be a good idea in the eyes of the U.S. military. Here's the thing- I'm guessing that the Iranians already understand that the U.S. isn't going to roll over if they blockade the Straight of Hormuz, and, in fact, the Iranians aren't blocking that area right now and haven't really tried to do so in the recent past. Which leads to the question of exactly what the U.S. was trying to accomplish when it issued this warning to Iran in front of an international audience.
My answer is that such statements are simple provocation.
I think that the U.S. is frustrated with Iran over its support of militia groups in Iraq, and the U.S. military is sort of goading Iraq in front of the world community- issuing challenges and hoping to bait Iran into something that can be definitively labeled as a hostile act. And then we'll be off to the races on another Middle Eastern war.

Anyway, that's just the way that I see this thing. I'm not saying that we should put up with any actions by Iran that threaten international security, but let's not throw spitwads at the slow kid in the corner either, ok?

And in other news, actor Dennis Haysbert has been quoted as saying that his role on the TV show 24 may have helped to pave the way for Barack Obama's presidential campaign. A lot of people are going to find that comment laughable, but I bet that most of those people have never watched the show (or at least the first couple of seasons of the show, which strongly featured Haysbert). 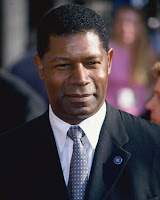 Haysbert's character on 24, President David Palmer, was the first black president of the U.S., and Haysbert brought a very believable, presidential quality to the fictional leader. In the stress-filled, anxiety-ridden, disaster-around-every-corner world of 24, Haysbert's character was always a model of grace under pressure, making logical, calm, morally sound decisions in the face of terrorist attacks, assassination attempts, and other chaotic events. He presented a reassuring, inspiring face for the citizens of 24's fictional America, and Palmer consistently acted in the best interests of the American people, providing leadership that people could feel confident in during times of crisis. And it doesn't surprise me that Haysbert was convincing enough in his role to make viewers start to wonder a bit...
I don't think Haysbert single handedly gave Obama the nomination, but President Palmer was a well-loved character, and he presented the sort of president that we wish we could have in the real world, regardless of skin color. I think that seeing a black actor portray the president in this way just sort of fueled the imaginations of a whole lot of viewers and opened their minds to the possibility of what kind of president a black person might potentially be. Haysbert didn't necessarily make people specifically want to have a black president (and his fictional character certainly didn't change the minds of racists or people who actively resist the idea of seeing a black man in the White House), but he may have helped to make the possibility of a black president seem like a much more realistic, viable option for a lot of viewers. And 24 has been an extremely popular show, with millions and millions of people in its audience.

While I actively tout on my Facebook I am not an "Obama Mama", I have to admit that "24" paved the way a bit for an African American to become President....he at least set up an ideal for a personality type for the job.....of which NONE of the candidates in '08 possess.....just saying....