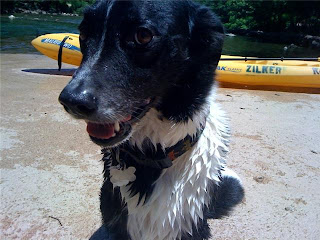 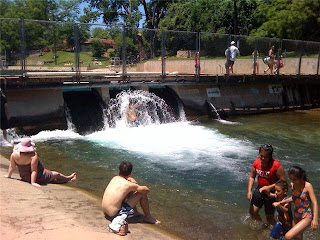 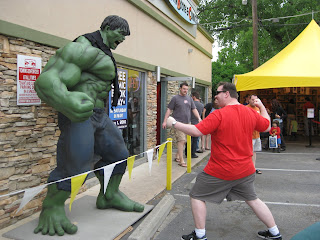 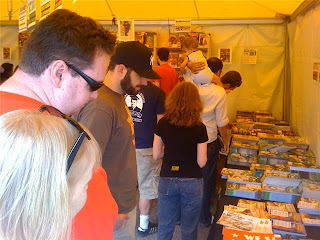 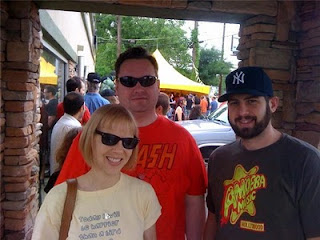 Well, it was a good weekend, all in all. On Saturday I celebrated the fanboy high holiday, Free Comic Book Day, with a trip to Austin Books with Ryan, Jamie, and our friend, Paul. There was quite a crowd in attendance for Free Comic Book Day, including a few costumed fans (I saw a couple of Spidermans, a Batman, and I think a Black Cat and a Batgirl in the mix, although I heard Black Cat and Batgirl were just doing a plug for Lucy in Disguise, the costume shop on South Congress). Anyway, I picked up a bunch of free stuff as well as the trade paperback of a series called Scalped, which is essentially a variation on a sort of crime noir theme, but taking place on a South Dakota Indian reservation within a Native American organized crime syndicate (which is kind of interesting).
Sunday, Cassidy and I took out first trip of the year down to the spillover at Barton Springs. Cassidy was really happy to be there, and the weather was really great.
Other from that, the weekend involved a lot of guitar playing and a bit of reading and some Sunday evening Mono Ensemble practice.
And so there was this bomb scare in New York's Times Square over the weekend.
Once again (as with the shoe bomber, the Christmas Day bomber, and others) Americans managed to dodge a bullet (in a metaphorical sense), mostly because of the ineptitude of the attackers. I'm guessing that this Times Square deal was the work of domestic terrorists who were more or less amateurs in terms of setting off nasty bombs in crowded places (there were propane tanks, gasoline cans, fertilizer, and M-80s in the car, but the fertilizer was "nonexplosive grade" and the police are now thinking that the devices in the car may have ignited or begun to burn prematurely, causing the bombers to hurriedly abandon the operation).
Anyway, a tee shirt vendor noticed the vehicle and contacted a policeman who smelled gun powder and began to immediately evacuate the area. Hats off to those two guys for being on top of things so quickly. We can yell and cry all that we want for increased Homeland Security measures, better surveillance, and so forth, but, in the end, the awareness and quick thinking of these sorts of average people are going to be the sort of thing that can really help to keep us safer (just go ask the people in the U.K. who lived with IRA attacks for years or people in Israel and the West Bank who've been dealing with terrorist attacks for decades).
And that whole oil spill mess just continues to get worse out in the Gulf of Mexico. On CNN this morning, several different times I heard reporters asking people if this whole thing was "President Obama's Katrina". Well, if you keep asking that question that way (Rush Limbaugh, I believe, was one of the first people to characterize the oil spill with that term) over and over again for long enough, then people might start to see it that way, but I think the parallels are minimal, at best. The governmental failures of Katrina were largely compounded by the fact that the unorganized response was headed up by Bush's new director of FEMA, Michael D. Brown, an appointee who received his position by way of political maneuvering and nepotism, with little expertise or experience in coordinated disaster response and relief.
Obama critics have attempted to say that the president's response didn't come quickly enough (an accusation which was levelled at Bush in the wake of Katrina), but in the case of this oil spill, the U.S. Coast Guard has been on the scene since just about the beginning of the whole thing, and additional resources (including the Navy) have been deployed as their need has become apparent. If anything, the recovery effort may have initially been slowed a bit by a lack of appreciation regarding the scope and size of the spill, but early reports from BP (who had the greatest understanding of the accident and the most technical knowhow regarding the site) now seem like they were either inaccurate or that they initially attempted to minimize the scale of the disaster. Bush's folks, on the other hand, failed to mobilize even as news of broken levies and flooding began to fill the airwaves.
Anyway, I guess I shouldn't be too surprised that Obama's critics are immediately going after the president and the way that he's handled this ordeal, but it annoys me to know that many of the same people who have been stout defenders of offshore drilling in the name of "American energy independence" are now going to try to criticize the president for not cleaning up the oil industry's mess fast enough when disaster occurs. (and this right after the president sort of went out on a limb with his own political base by lifting the moratorium on offshore drilling along the East Coast and Alaska- although we'll see if that changes now)
Give it a rest, people.
Well, that's all that I have for now. Hope you guys are starting a great week!
Posted by J.S. at 8:51 AM