Hi. Halfway through the week. Dig it.

Happy Cinco de Mayo! Hope you guys get a chance to have a margarita or something. 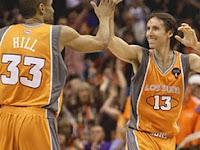 So what's up? Not too much here. The Phoenix Suns have announced that in tonight's playoff game against the San Antonio Spurs the Suns will be wearing jerseys that read "Los Suns", a uniform change meant to protest the new Arizona immigration bill and honor the Arizona Latino community on the Cinco de Mayo holiday. The team is reported to have conducted a locker room vote on the matter and unanimously decided to wear the jerseys in order to protest the new bill (which allows the police to demand people to produce documentation that proves their citizenship in various "suspicious" situations).
As insignificant as this change of wardrobe sounds, I think it actually took a bit of courage. This move by The Suns is probably going to really piss a lot of people off, especially, but not limited to, people in Arizona. First of all, the law has a fair amount of support in Arizona, and second of all, the NBA probably isn't going to be too happy about the players and the team owner, Robert Sarver, potentially hurting their ratings and/or risking a boycott with this sort of overt political action. Sarver attempted to mitigate the controversy a little bit by pointing out that this flawed state immigration law was only passed because the federal government has failed to assume any sort of effective leadership role in tackling immigration issues (this should slightly pacify a few conservatives- if there's anything they like even better than worrying about illegal immigrants it's hating on the federal government). Still, in a state where former GOP presidential candidate John McCain is now having to watch his back because he's not conservative enough, it seems awfully risky for a professional sports team to be taking a stand on controversial laws regarding illegal immigrants.
And I know that a lot of people are going to be saying that professional sports are simply not the proper place for a political protest. But I guess I disagree with that sort of thinking. For one thing, these "Los Suns" jerseys are normally worn as part of "Noche Latina", a marketing gimmick that the NBA has been using on designated nights to try to appeal to their Hispanic, Latino fan base. If the NBA is willing to pander to, and try to make money off of, a Latino audience, then they probably shouldn't shy away from some involvement with issues that effect that community.
Also, to be honest, I think that part of the problem with the political discourse in our country is that such a large percentage of the population simply opts out of any participation in the political process. It just seems like we have way too many people in this country who sit on the sidelines while much more vocal elements from the more extreme ends of both sides of the political spectrum are the ones who end up dominating the political landscape. Anyway, I know that many people just want to watch their basketball without having to ever give a thought to issues about illegal immigration (or any number of other issues), but given the fact that the illegal immigration debate is having a life changing impact on significant other segments of our population (legal and illegal immigrants, their families, their friends, and their communities), I think that more people should be giving this matter some thought. Raising the consciousness of the sports viewing audience might not be a bad idea. If a change in uniforms by the Suns is enough of a catalyst to make people put down the beer and pretzels for a moment and have a brief conversation (or at least a moment of thought) about immigration issues, then I think that The Suns have accomplished something worthwhile (and I think it can't hurt for a bunch of sports fans to realize that these issues aren't just for lame, old suits and politicians- even famous basketball players care about this sort of stuff).
Anyway, I can see how political protest at sporting events could quickly get out of hand (I'm not sure I'm ready to see a litany of different political grievances appearing on various basketball jerseys every week), but this Arizona immigration law is sort of a unique situation. It's a state law (meaning that in some ways it's sort of a regional issue), but it's attracted a whole bunch of national attention (and international attention, for that matter), and I think that the Suns players just felt like they needed to do something to demonstrate that not all Arizona citizens are in support of this law. In effect, they're just trying to represent the views of a certain part of their home state- a group of people who feel like their voices really haven't been heard in light of the new legislation.
I'm a Spurs fan, so I'll be pulling for them, but I'm pretty impressed with the Suns. If nothing else, it's nice to see them acknowledging the fact that there are some things going on in the world that people ought to be just as interested in, if not more interested in, than sports.

What else? I don't know. And today has been kind of crazy.

Maybe I better just say adios for today. I'll rap at you guys tomorrow.
Posted by J.S. at 10:41 AM

I kind of wish that The Spurs would have refused to travel to Arizona, think of the message that would have sent. But I realize that it is something that lots of people would keep from happening. Do you think Manu and Tony are worried about being stopped on the street and asked for their papers?

You also have to realize how crappy a state Arizona is (I lived there for 6 years that I barely remember seeing as I was 2-8 years old), but my Dad has been living there for the past year, and he hates it. Arizona was one of the last states to recognize Martin Luther King Jr. Day. Their refusal to recognize it led to the NFL pulling Super Bowl XXVII from Tempe and relocating it to Pasadena. Also, John McCain voted against the creation of the holiday to honor King.

Salutations from Nashville. The flooding was indeed horrible. Biblical almost. In the course of 30 minutes our garage was flooded on Sunday morning. Amazing how fast the water rose. We managed to escape with some water in the crawlspace and a foot and half in the garage, but no real damage. Car seems to be working as usual.
I was at home with Jane and Samuel while my wife was stuck on call at the hospital. I had visions of being stuck for days upstairs with 2 small children. Sartre could have used me in a play!

Still many houses underwater and highways shut down. The radiation oncology facilities at Vanderbilt were flooded and remain closed.
A little water in the garage was nothing, all things considered.

I hear ya, Paul, and I'm glad to hear the Palka family is safe and sound. Been thinking of you guys!