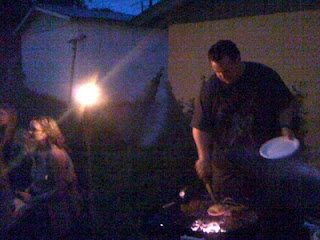 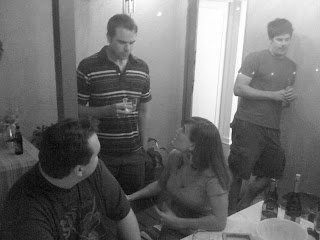 Hey! Hope everyone is starting off the week on the right foot. My weekend was pretty good. These pictures are from a barbecue that Matt and Nicole had at their place on Saturday. It was a good time. Once again, we find Ryan hunched over a fire, poking a piece of meat with a stick, and in the other pic that's Jeff chatting it up with Ryan and Laura while Matt hangs out in the background (I think maybe there's someone out of frame that Matt's talking to, but it's also quite possible that he's just awkwardly lurking and hoping to be included in the conversation). Anyway, it was nice to hang out with folks at the barbecue.
What else? Well, I went to the spillover with Cassidy, spent a lot of time playing guitar, did a bit of recording, ran some errands, and went to see Iron Man 2 with Ryan and Jamie. 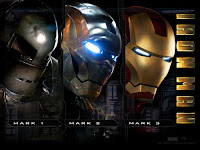 I liked Iron Man 2. I thought that it dovetailed really nicely into the first Iron Man movie (the characters, with all of their concerns, motivations, and personalities, remained realistically consistent between the two movies), and although most of the big battle action sequences didn't happen until near the end of the movie, I actually really enjoyed most of the character driven storyline stuff that led up to the shooting and the exploding and the aerial acrobatics.
I mean, Iron Man is basically a popcorn movie, to be sure, but it's still a really fun ride, and it remains smart and clever. I've read a few reviews from critics who didn't like the movie (although lots of critics do like the movie- it was at about 75% on Rotten Tomatoes when I checked last), but many of the negative reviews sounded like the rationalizations of people who probably weren't ever going to appreciate a summer blockbuster superhero movie in the first place (and who were probably sort of dismayed when the popularity of the first Iron Man movie sort of forced them to take the whole premise more seriously than they wanted to in the first place). When it comes to summer action movie blockbusters, I think that Iron Man 2 holds up pretty well. I think that most people who liked the first one will probably like the second one. If you didn't really see what all of the hubbub was about the first time around, though, Iron Man 2 probably isn't going to be the movie that wins you over.
Oh yeah, I also saw Kick-Ass on Friday (why does Friday always seem like such a distant memory by Sunday night?). For those who don't know, Kick-Ass is a superhero movie about a

kid with no super powers (well, he gets beaten up, and somehow, in the process, his nerve endings become deadened somewhat- not much of a power, anyway) who decides to become a superhero and fight crime. In the process of becoming the world's first real superhero, Kick-Ass figures out that there are some very real bad guys out there and some really violent, crazy, vigilante-style superheros who are already waging war against them.
Kick-Ass is a weird movie. It's pretty darn violent, has some very vulgar language (made more shocking because it's coming out of little girl's mouth), and it has a sort of extremely flexible internal logic which makes it feel sort of realistic one moment, but then totally implausible the next (yes, I think a couple of armed street muggers would probably make short work of some self proclaimed superhero in a scuba suit; no, I do not think an eleven year old girl could take out twenty odd members of an organized crime syndicate- even if she was raised by a crazy father who constantly trained her to fight).
Basically, there are a lot of reasons you can criticize Kick-Ass, and plenty of reasons why the movie could fail, and yet somehow I was entertained by it, anyway. The movie is quirky and fun and it doesn't ever take itself too seriously (sometimes maybe not even seriously enough- at least two times during the movie there are kids whose parents get killed, but the kids just seem to shake these events off as if they were relatively minor inconveniences).
I think that part of the reason I ended up enjoying the movie was because of the cast. From Aaron Johnson to Chloe Grace Moretz to Nicholas Cage to Mintz-Plasse, I thought that there were a number of good actors in the film who did a good job of developing their characters and having fun with them.
Anyway, I have a bit of a hard time heartily recommending Kick-Ass to everyone because I know that it's not going to be up everyone's alley, but I enjoyed it.

What else? Sounds like Obama is going to select Elena Kagan to be his Supreme Court nominee. While I'm cautiously supportive, to be honest, I just don't know a whole lot about the woman. While she's never been a judge, Kagan's current post in solicitor general, meaning that she represents (or manages the team which represents) the United States on most cases that are heard before the U.S. Supreme Court.
So Kagan doesn't really have judicial experience, per se, but she has lots of experience with the U.S. Supreme Court, and a thorough understanding of how the court operates and decides cases.
Kagan's also the former dean of Harvard Law School, formerly served as White House Counsel under Bill Clinton, and was a law clerk for Thurgood Marshall.
At any rate, if Kagan makes it onto the Supreme Court, this would be the first time that three women have ever sat on the court at one time (Justices Ginsburg and Sotomayor already hold seats), so that would be cool.
Anyway, I'm sure we'll learn much more about Elena Kagan as the confirmation process moves forward.
I have to say that I'm a little disappointed that I wasn't nominated. Oh well. I'll get 'em next time.
And I was frustrated and disappointed to see that BP wasn't successful in containing their offshore oil leak with a dome over the weekend (apparently some sort of ice crystals formed when they tried to use the thing, making it too buoyant and possibly plugging up the oil flow into an evacuation hose).
I'm not sure what other implications this whole mess is going to have, but at the very least, I think it's clear that they're going to need a much better back up plan in place to deal with accidents and disasters if we're going to even consider to allow continued drilling in deep water off of America's coastlines (it feels like all of the attempted remedies that are going on now are sort of experimental fixes that haven't been tried in deep water before. I understand that things rarely go wrong this badly on deep water rigs, but given the consequences of an accident, it seems like contingency plans probably should have been better developed. I find it not at all reassuring that all of these "fixes" are now being tried for a first time at this depth in the midst of a potential ecological crisis.).
Well, that's about all that I have today. Hope you guys are having a good one!