Hey there.
Hung out at home last night.
I finished watching a Torchwood miniseries last night called Torchwood: Children of Earth, and it was actually really good. Torchwood, for those of you who aren't nerds, is a spinoff of the BBC's Doctor Who series. Torchwood itself is the fictional (far as I know) secret division of the British government which is charged with the task of protecting the Earth from harmful alien activity (the Earth of Doctor Who being the kind of place that experiences alien visitation on a semi-regular basis, although few of these encounters ever become known to the public). Torchwood was founded by Queen Victoria after she witnessed some aliens doing battle with a time travelling Doctor on a prior episode of that show.
Anyway, I've watched Torchwood before, but the results have been mixed, with some episodes being much better than others. Nonetheless, Torchwood is the kind of show with a fairly complex, well developed mythology (much like Doctor Who), so it has some moments which really pay off for fans who've invested some time with the series.
The Children of Earth miniseries was well written and well executed. I don't want to say too much about it, except that it was sort of creepy and disturbing in a way that I hadn't seen from a television sci fi show in a long time. The aliens don't sneak around in the dark waiting to attack people. They're more in along the lines of the "take me to your leader" sort of aliens, but they're scary- and there's lots of good stuff in the miniseries about how the world's leaders might deal with such a threat.
Anyway, people should check it out. You could probably get the hang of it pretty quick even if you haven't seen the show before. The only important detail you should probably know is that Captain Jack (who's an associate of The Doctor) can't die. He resurrects whenever should die, and he leads a team of alien-fighting secret agents.


There you go. Now go order it on Netflix. If you have an inclination towards sort of darkly themed sci fi. 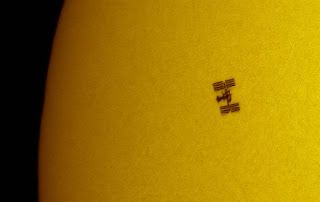 And here's a picture of the International Space Station taken on July 26th from Orleans, France, as the ISS flew between Earth and the sun. The universe is big, and we are very, very small.

And there's a bit of good news for wildlife conservation supporters. A two year study of 10 large marine ecosystems has yielded some hopeful results, indicating that at least half of the ecosystems sutdied were now beginning to show signs of recovery (i.e., increased fish populations) in response to heightened conservation measures and stricter management practices. The researchers were quick to point out that most of these overfished areas are still in serious need of further recovery efforts, but they also reported that some significant progress was being made.

So that makes me happy. In addition to thinking that the preservation of wildlife populations is a good thing in and of itself (not only saving particular species of fish, but also protecting all of the other parts of the ecosystem that are inextricably linked to these fish populations for their survival), I also like to eat me some fish from time to time, and it would be nice to know that fish populations are being managed in a way that keeps those populations a sustainable resource.

Well, that wasn't much, but it was really all that I have time for.