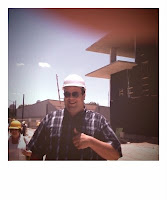 Hi! Remember when I said last week that I had gone down to San Antonio to tour Haven for Hope, the new homeless facility and detox center they're building down there? Well, here's a picture of foreman Steanso checking out the construction site and making sure that everything was being done correctly. Also, there's a bit of my friend Karen's finger in the picture. Anyway, just wanted to give you Adventurers a glimpse of Steanso working hard for the taxpayers of Travis County.
I didn't get up to much last night. I had some chicken fajitas with Team Steans (thanks, Jamie!), and watched an episode of a show called Texas Ranch House with Ryan. Texas Ranch House is a PBS show where they take participants and put them into a, well- Texas ranch house. The participants work the ranch for about two and a half months, using only the tools, supplies, clothing, etc. which were available to people around the year 1867 (Ryan explained to me that this was a period shortly after the Civil War, when land was widely available and cheap in Texas, and many inexperienced people moved here to buy up land and try their luck with ranching).

The show was sort of interesting. There was a lot of infighting among the people on the ranch (between the cowboys and the family that owned the ranch, between the cook and the rest of the participants, and between the women and the men). By the end of the episode, the women had decided that the men were all a bunch of sexist pigs, but it wasn't clear to me whether that was actually the case, or whether the women were actually just frustrated with their assigned roles (which, as in 1867, consisted largely of housekeeping, laundry, gardening, and other labor-intensive domestic tasks, while the men did most of the actual cattle wrangling and so forth). I wasn't sure what to make of the claims of sexism from a bunch of people who agreed to go live by the norms and standards of an era which was, yes, undoubtedly sexist (especially in terms of relegating women to particular roles within society). Maybe they thought that they were signing up to go live 19th century style, but with an exception made for gender roles, but if so, I never heard that possibility discussed.

Anyway, it was sort of an interesting show, but the biggest differences that readily became apparent between the lifestyle of the 1860's and today was probably just in the attitudes of the people [not just women- the men, too]. This show had all of the buildings, equipment, clothing, and livestock of an 1860's ranch, but the people on this show had a certain whininess and entitlement which just wouldn't make sense for a bunch of people in the 1860's who found themselves living this sort of life. I think people on an actual ranch back then would have probably found themselves much more inclined to dig in, bear down, and get the work done in whatever way was necessary, cooperating with each other more out of a pragmatic need to survive and make the ranch work than because they all really liked each other and shared common attitudes and outlooks. The people on this show were only committed to the idea of making the ranch work up to a point, knowing that they would be headed home in a few months whether the ranch succeeded or failed. Also, you'd probabloy get less whining and friction from the people on an 1860's era ranch because they simply wouldn't have anywhere else to go. I mean, they might be able to leave and get a job on another ranch, but conditions there were by no means likely to be any better than at the ranch where they were already working. They weren't looking at the difference between Texas ranching life and a life of air conditioning, sofas, and cable television.

Anyway, regardless of these things, the show was interesting. I'm not really sure how successful the experiment was in terms of successful 1860's style ranching, but if nothing else, it got you thinking about what it really must have been like to live back in those days in that sort of environment.

And the longest solar eclipse that will occur this century occurred in Asia overnight. 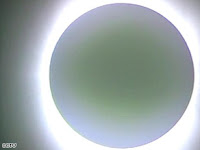 The eclipse inspired the chanting of monks in South Korea and mass bathing in the Ganges River in India.
The eclipse was cool, judging by the photos. I kind of see it as just a little glimpse at the incredible activity that's going on in the universe around us all of the time, but which we normally don't think about or see. We spin around on Earth, which is constantly spinning, and which orbits round the sun, while the moon orbits Earth- which is, of course going 'round the sun. People don't think about any of this stuff very much. But then the moon casts a shadow for a couple of minutes as it cuts off our view of the sun, and people stare up at the sky and sort of freak out, praying and fearing and generally acting awestruck. Eclipses are reminders that we live in a universe of constantly moving objects and entities- that objects like the sun and the moon are real objects with real motion and real properties. They're not the universal constants that we fool ourselves into thinking of them as.
Anyway, the pics of the eclipse are cool.

Were there any black people on the show? If so, did they make them use separate bathrooms and water fountains, etc.?

I know that was probably a joke, but there actually was a black guy who showed up in the role of a roving, town-to-town, bronco buster, who had the job of breaking in wild horses to get them prepared for riders. He talked about how dangerous it was to have to try to ride wild, bucking horses (especially in an environment without readily available medical help), but spoke of the fact that it was some of the only work that black cowboys could get back in those days and still earn a decent wage (and, of course, they were subject to awful prejudice most of the time they were carrying out their job). So anyway, yeah- while the women were complaining about doing the laundry, the black guy was getting thrown around the corral by a wild horse.

Why didn't he just do the laundry instead if that's such a pissant thing to complain about?

I don't think the women knew how to break in horses at all.

Also, I reread my original post, and I realize I may have made it sound like the women on that show were the onyl ones doing the complaining, which wasn't true. The men complained a lot, too, but just not about sexism. On the whole, I think some people signed up to be on this show who had a very romanticized bersion of frontier life in their heads before they tried to live it, but when confronted with reality they didn't just try to cope with the situation and gain an appreciation for people who used to live this way for their entire lives- instead they just started arguing and bitching in a very modern, reality-show sort of way.

I will stick to Deadwood, thank you very much.

If a "wild west" show doesn't have Al Swearengen, it isn't worth watching.

Well, yeah. And there was a sad lack of whorin' on Texas Ranch House.