Hola. Not too much report. I spent a good part of last night messing around with by 'puter, my digital recorder, and an external hard drive. I also watched another episode of The Mighty Boosh. Long live The Boosh.


I usually drive into the work in the mornings along South Lamar, and for the last few weeks there have been these people who have been standing at the streetcorners and near the crosswalks at Riverside and 5th Street who have just been dancing on the sidewalk- spinning and gyrating and waving their arms in the air. Depending on my particular mood on a given morning, I have found them alternately wonderful ("Look at those people feeling the groove and spreading some joy this morning!") and/or mildly annoying ("What do those pseudo hippies think they're doing? Probably don't have to go to work and slave away under flourescent lights...").
Anyway, they weren't there this morning, and I found myself sort of missing them.
Even though my feelings about the dancing sort of varied, I realized this morning that at least it was usually interesting, and the dancing did a little something to break me out of the usual duldrums of my usual work-a-day commute.
It was weird. I know it's become a bumper sticker here in Austin, and the whole slogan bothers some people, but I sort of like the whole "Keep Austin Weird" mentality (and I think that a lot of what bothers people is just the word "weird". If the slogan was "Support Displays of Individual Expression in Austin" then people might be more accepting, but it's hard to fit that on a bumper sticker). It's really easy to slip into routines and habits and to ultimately end up just sort of sleepwalking through life, and I think things like drivetime streetcorner dancers just kind of snap you out of your own head and make you reexamine what's going on around you. Whether you enjoy any particular act of weirdness or not, at least it takes you out of your normal routine long enough to think about whether you like it or not. I think that, in and of itself, sort of gives these things value.
Also, personally, I enjoy living in a place that's filled with creative people who sort of do their own thing, so I tend to enjoy art and strange goings on even when I'm not that into the particular thing itself.
Anyway, it's probably best that the dancers aren't there every day. Once you start to expect something, it just sort of becomes part of your routine, and it doesn't have the same impact.
I think I need to start a guerrilla art group. Who wants in? 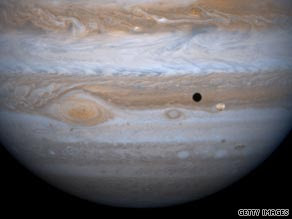 And apparently something has collided with Jupiter and left a mark on the planet that's roughly the size of Earth. I don't know what's stranger- knowing that there are undetected objects flying through the solar system that can leave an impact that's the size of our entire planet or looking at the little black dots on the pictures of Jupiter and hearing scientists tell us that the dot is about the same size as Earth (Jupiter is a big planet, apparently).
Scientists still haven't been able to figure out what sort of object collided with the planet. Personally, I suspect that aliens have been test firing some of their weapons systems, or that some kind of deep space battle is occurring between some superhero and some supervillain. Or it might have been a comet.

Well, I need to run. Hope you guys are having a good day.
Go out there and shake someone out of their rut.
Posted by J.S. at 10:05 AM