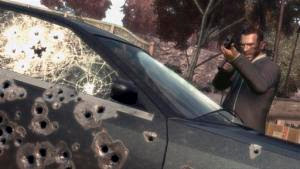 Well, I posted a little while back about the new Grand Theft Auto game, and about how I think that the Grand Theft titles have included some pretty revolutionary game design and graphics and whatnot, despite the fact that they have repeatedly received criticism for their violence and the questionable morality of their lead characters. I just wanted to post a quick follow up.

Apparently Grand Theft Auto IV earned over $500 million in its first week of sales. To put that in perspective, the new Indiana Jones movie, Indiana Jones and the Kingdom of the Crystal Skull, is predicted to be the highest grossing summer blockbuster at the movie theater this year, and it's expected to make maybe $355.9 million (which is an awful lot for any movie). GTA IV crushed that in its first week.

Also, as expected, GTA IV has met with some criticism, including complaints from Mothers Against Drunk Driving about the fact that there are parts of the game where the main character can get behind the wheel and drive around in an intoxicated state as part of the game (I guess the screen gets blurry and its harder to control the vehicle when you've been drinking). MADD says that this aspect of the game glamorizes drunk driving and makes a game out of it (the implication being that gamers will want to try out this behavior in real life since they've tried it in the game). Even though I'm obviously against drinking and driving, I'm not sure that I share the viewpoint of MADD in this instance. The main character in this game also drives around shooting people, blowing up vehicles, and engaging in lots of other nasty activities, and I don't really think that the game designers intend for players to go out and engage in these activities in real life. I think they put these things into the game because they're a main part of telling the main character's story, and because, nasty as they are, these activities are part of what makes the story interesting. And if designers are trying to make the game as realistic as possible, isn't it better to make it harder to drive after your character has been drinking? (portraying the character as drinking heavily, but then driving without difficulty might, arguably, send a worse message)

Once again, I think the real issue here is that Americans still haven't really come to the understanding that videogames are works of fiction, just like books, movies, or TV programs, and that simply playing a game doesn't mean that players necessarily want or plan to go out and emulate the actions of the game's characters. You can be interested in a character without wanting to be that character.
Posted by J.S. at 1:52 PM

I must be getting old in my old age. I rented GTA IV from Blockbuster this weekend, and fired it up.

The old formula is getting, well... old. Bigger city (I'm sure - not that my less than one hour or so of playing took me through more than 1% of it), more impressive graphics, etc.

But, I don't think it's all that surprising that computer games (good ones) make more than movies. You can get alot more enjoyment out of a game - at least in terms of time spent.

I've barely scratched the surface of what's possible with cIV (on PC) and I'd bet I've played over 100 hours of it.

Yeah it costs almost 8-10 times as much as a movie does, but when a game is good, it's worth it.

Ooops, not that anyone cares, but I forgot to put this part in my review:

But it just wasn't as enjoyable as it used to be. I hope that doesn't mean I'm growing up."

Keep in mind that while Indiana Jones wille arn the studio $355 million in box office, that doesn't include product tie-in's, DVD/ blue-ray sales, cable distribution, putting the movie on airplanes, etc... In the end, the investment in Indy could bring in far, far more than the $355 million for the next few decades.

If the movie goes over well with audiences.

Video Games haven't quite figured out how to make that window stretch quite as well as movies and now TV (with cable re-distribution, DVD sales, etc...). That's not a negative, but I think comparing the first week sales of GTA IV to potential domestic box office for Indy is a bit of apples and oranges.

Well, I can definitely see the possibility of it getting old. I never actually bought GTA: San Andreas because I had never managed to finish all of Vice City, and San Andreas looked like more of the same (essentially- I mean, I know it had some new bells and whistles). I still have a lot of respect for the sandbox style gameplay and all of the things that Rockstar Games came up with in order to fully utilize that design, but I thought they were getting a little bit redundant by the time San Andreas came along (which, nonetheless, was one of the most highly acclaimed games in all of the industry reviews the year it came out). They're claiming that the graphics and gameplay are improved, so I'm interested in checking that out (I always found the combat system a little cumbersome in the prior versions).

Anyway, yeah, my point with the sales numbers was mostly just to once again underscore the fact that videogaming has definitely come of age as an entertainment medium. Games are only going to get more and more intricate and complicated as their profitability continues to soar.

In order to fulfill the promise of videogames, though, game designers are going to have to learn to focus more and more on the stories that their games tell (at least in the case of action games like GTA). I was hoping that GTA IV had a more well-developed storyline. Strategy games are addictive for other reasons, but action game designers are going to have to learn that stories are ultimately going to be more important than almost any other feature in selling good games (especially as the quality of graphics improves across the board within all games).

And to respond to The League, that $500 million figure was just for the first week. That title will keep selling for quite a while. $60 a pop. Then they'll drop the price point and sell it some more. Maybe $45 a unit. Then they'll repackage it and sell it as a $20 or $30 dollar version in a couple of years and label it a "Greatest Hit". Meanwhile, they'll be selling the rights to make a movie out of it, selling tee shirts, strategy guides, comic book rights, etc. (Halo has its own series of novels on sale at Borders, I've noticed, and they sell Halo halloween costumes, action figures, and so forth and so on) Videogames have their own merchandising machine, and it's not to be trifled with, either. Head out to your local Blockbuster and rent Doom, Bloodrayne (I and II), the Resident Evil movies, Hitman, and so forth and so on...

Apples, oranges, or whatever- I think that videogames are rapidly outpacing the motion picture industry by any standard. $500 million and the only people to have bought the game yet are the early adopters.

I think you're right, to an extent. But like a Star Wars movie, games like GTA IV have a lot of people lined up for opening weekend. There is no waiting for word of mouth to spread. See what week 2 sales are to determine actual results (that is not to diminish the success of the game, but we'll know how much of a landmark this is by how many units move in week 2. If its another 500 million moved, then, wow.).

And, honestly, kudos to Rockstar for not pulling a Wii and having enough units available to meet demand. The artificial scarcity thing with video games is ridiculous.

I don't know how many video game are able to follow the GTA/ Halo model, but certainly the examples you mention and their ancillary licenses are good examples of ways to expand the franchise. Certainly there's an interesting dynamic as far as expanding the brand, which doesn't ever seem to translate terribly well from movies to video games, for example.

As with movies, TV, albums, etc... by established talent, I'll be curious to see what the second and third week sales are versus the true believers who camped out, tried to rob stores, and all the other fanboyish behavior to get a copy of the game.

Yeah, there's no doubt that sales will drop off substantially after the initial rush, but I think they'll continue to have steady sales at a lower level for quite a while. I know that with GTA I and II they continued to remarket and resell those games in different incarnations for a long time, even after III was out (I remember they issues some kind of GTA classic set where you could get the first two games together as a set).

I guess part of what I was trying to point to is that GTA might experience that success, but movies have several different methods of distribution that reduce risk for even the lowliest of movies.

Don't mistake this as me saying that every movie is profitable. But my point was that pointing to box office figures in 2008 for any movie is kind of pointless except as a guess as to whether a movie is going to stay in the black or become a runaway hit. These days, DVD sales make up half or more of take for a movie. In some ways, the BO is sort of meaningless.

Yeah, I know you have to factor in DVD sales and overseas sales and all of that stuff, but I still think that the best selling videogames are now beginning to outperform movies by almost any standard that you apply (the main hindrance to their complete dominanace being the fact that the audience has to own a semi expensive console in order to play them, and that many games are only released on one or two consoles, but rarely on three or more major platforms simultaneously).

In a sidenote, in terms of comparing the overall profitability of games versus movies, I haven't even begun to talk about subscription-based online games. I read in one industry blog somewhere that World of Warcraft had been making upwards of $800 million dollar a year in selling games and subscriptions over the last couple of years.

MY overall point is that video games are quickly rising to the point where they're doing much better than movie sales (in producing overall profits), and I think that's going to be true no matter how you break it down.

I was gonna weigh in with this thought: video games don’t cost $100 million dollars
to make.

Yeah, well, traditionally videogames ARE a lot less expensive to make than movies, but I think that the makers of GTA IV were really trying to knock one out of the park on this one, and I'd say that their investment is going to end up being money wisely spent.
It's good to see people going out of their way to raise the bar in producing these games. If I'm going to be expected to spend 80 hours completing a game, I would hope that a lot of time and energy went into creating its internal environment.
Incidentally, I think I read that Iron Man's production costs were somewhere around $150 million, and that was before they spent another $75 million on promoting it. (see- a measely $100 million is really a bargain... )