And a quick post just to say that yes, Steanso is in fact interested in and sort of excited about the release of the newest Grand Theft Auto game on Tuesday. I'm not sure I'll rush out and buy the game right away (I generally tend to wait until the prices drop off a little), but I look forward to playing it once I can get my hands on a copy.
These games have taken a lot of flack for having some adult-themed content (yes, there are drug dealers and hookers and gangs with machine guns), but the controversy surrounding the content of the games has often overshadowed the fact that these are some of the most well-produced, well-thought out, well-executed games on the market. In addition to having excellent graphics, great soundtracks, and good playability, the games have created a revolutionary playing style in which the environment inside the game (in this newest game, a fictional version of New York called Liberty City) remains constantly open and free 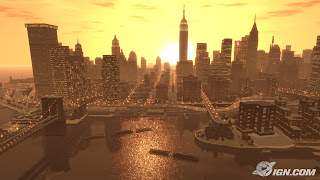 for the character to roam around in and explore (industry insiders call this "sandbox style" gameplay). Players can move from one job to another, picking up assignments and advancing forward through the storyline of the game, or they can just wander around the city, finding smaller side missions, interacting with computer controlled characters, or generally getting themselves into trouble (and the city environments of the games tend to have an astonishing amount of diversity and detail- including waterfronts, shopping malls, used car lots, strip clubs, pizzerias, barber shops, and so on and so forth). The point is, as a player you don't have to follow a pre-determined storyline or narrative arc- as in real life, you can amibitiously and hurriedly try to advance your character through the challenges that lay before you, or you can just as easily just wander around the game, spending your time finding hidden "mini games" or creating your own challenges as you go.
Anyway, the Grand Theft Auto games aren't just potty mouthed trash for troubled teens. They're also extremely complicated, advanced games that exist at the highest level of the videogame experience. The Grand Theft games simply are not meant for children (heck, it's probably not even the greatest idea to give some early teenagers access to these games), any more than violent movies like Scarface or Goodfellas are meant for children. The problem with the games isn't so much a problem with the games at all- it's more a problem with American society getting its head around the idea that not all videogames are meant to be played by gamers in every age range. On the whole, parents just need to be much more aware of what they are exposing their children to when they purchase videogames for them. There 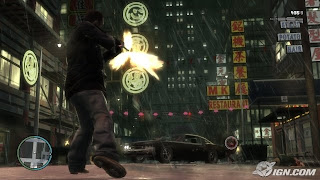 are many extremely violent games out there which don't seem to attract the same negative attention that the Grand Theft games endure (although in terms of keeping children away from these games, perhaps they should), but I think the primary difference comes from the fact that the Grand Theft games employ violence on a more realistic level than most. The violence in Grand Theft doesn't have characters lopping the arms off of ogres or blowing the heads off of aliens with laser rifles. In Grand Theft you're more likely to end up chasing a gangster or a drug dealer down an alley while spraying bullets out the window of your Corvette with an uzi.
Like I said- the Grand Theft games are not for kids, but that shouldn't prevent adults from appreciating the technical genius that propels the storytelling in these games. The stories may be a little rough, but that doesn't mean they're not worth experiencing.
Posted by J.S. at 11:06 AM

But video games are a children's medium. The medium is meant for children, children will get their hands on these video games, so adult-themed content has no place in the medium. To suggest otherwise is foolish.

Adults who still play video games are man-children, stuck in a state of arrested development and should recognize their lack of maturity and quit living in the button-mashing world of artificial violence and sex. The over simplistic storylines, the repetitive nature of the narratives all suggest that fans of the medium aren't capable of moving on beyond children's entertainment.

I beg to differ on that issue...I play video games and I have to say that grand theft autos is one of my favorites. /dk

I think he's kidding, DK. I think. (there's a teensie chance that this comment may be a bit of retribution for the fact that I said all comic book fans were drooling idiots on his blog last week)

well, I have to say that adding DK to your cause is sneaky, at best.

DK is sneaky. Her small stature allows her to sneak in beneath the radar when no one is looking. (this is how she bites ankles so effectively)