The weekend was pretty good. Friday night I had dinner with Ryan and Jamie. Reed came by after dinner and we watched an episode of Battlestar Galactica and drank a couple of beers. Saturday I had breakfast with Ryan and Jamie. I'm not really sure what I did Saturday afternoon. I was going to go to Barton Springs, but I think I ended up helping Mandy with an errand or two instead. Saturday night Chris Griego came over. We went and ate Chinese food and briefly played some Halo, and then Anna and Reed came over. We all hung out and talked and listened to Radiohead. I'm pretty sure Chris's birthday is today (it's either today or tomorrow), so happy birthday, Chris!! Yesterday I got up and went to the dog park with Ryan, Jamie, Lucy, Mel, and Cassidy. We all rode in one car. We learned at the dog park that although Lucy and Mel will chase tennis balls until the cows come home, apparently neither one of them is the slightest bit interested in chasing a frisbee. After the dog park we had a late lunch at the Central Market Cafe. Following that I ran to the store to get some new shorts, and briefly talked to Mum on the phone to wish her a happy Mother's Day. Then last night I went to Stubb's with Mandy, Susan, Greg, and the gang (we met the Blooms, Andy and Rami, Ellie, and probably someone else that I'm forgetting) to go see Wilco. 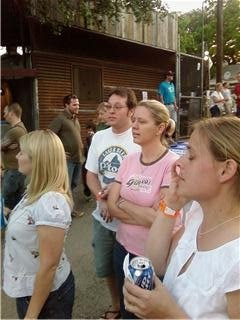 Mandy, Sigmund, Kim, and Susan assess the lay of the land after entering Stubb's. 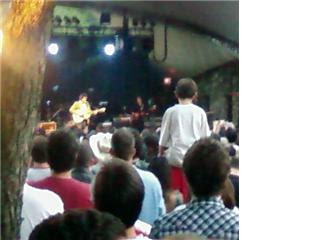 The Wilco show was really good. I'm not sure what to say about it, other than it was just a classic Wilco show. (If you've seen Wilco before, you kinda know what I mean- they have a sort of style that alternates between rocking pretty hard and being pretty mellow and laid back, with Jeff Tweedy rambling just enough to remind you not to take the whole thing too seriously). 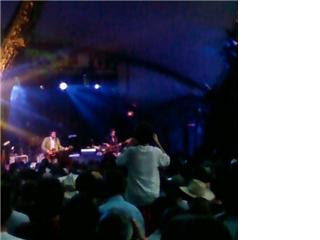 Having just seen The Raconteurs last weekend, it was kind of interesting to compare the two shows. The Wilco show that we saw was a great show, and I would guess that it would probably appeal to a wider audience base, but the Raconteurs had a much higher energy level and sort of blasted their way through their set in a way that kind of left you stunned (but still pretty amped up) when it was over. The Wilco show left you more with the kind of warm, fuzzy feel good feeling that you get after having a good backyard party with friends.
I might go see Wilco again tonight. Maybe.
Posted by J.S. at 9:33 AM