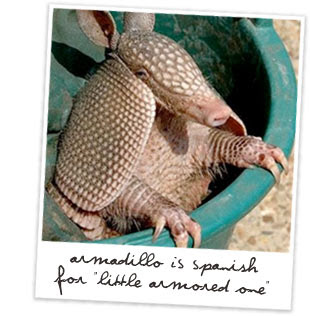 Well, it's Armadillo Day here in Central Texas, and it's a cold one (the high today is supposed to only be 33 degrees, so for Texas, that's awfully chilly). I saw a news story this morning about our local four legged prognosticator, Bee Cave Bill, and about how people were supposed to show up for a celebration (including food and some music) out in the Village of Bee Cave to see if Bill would emerge from his den and predict 6 more weeks of winter, but the only online news story that I could find about the event was one from last year. At any rate, given the current weather conditions, I'm guessing that Bee Cave Bill is going to be pretty lonely as he makes his prediction this year.

In other news, Austin has been experiencing rolling blackouts last night and this morning as Central Texas power providers struggle to keep up with power consumption during our recent cold snap. At my house we had our own series of blackouts, with power cycling on and off throughout the night and morning. The power company said that they initially intended to only shut off power for about 7 minutes for each blackout, but they ended up shutting it down for forty minutes or more each time (and it was off several times at my house).

So I guess I don't really understand this whole rolling blackouts thing. It sounds like some parts of town were repeatedly affected by the rolling blackouts, while other parts of town didn't suffer blackouts at all. I don't get that. Somehow it doesn't seem entirely fair. In addition to my heat cutting out, my commute in to work took twice as long as usual because the blackouts knocked out a lot of traffic lights. I'm just saying that if this is a series of scheduled blackouts, shouldn't we all be sharing the inconvenience equally?


In other news, here's a picture from a lawyer coloring book that Amy sent to me: 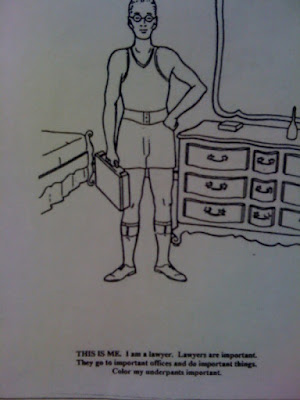 I found the picture pretty funny, so I taped it to my door. Here's what our office support staff did with it: 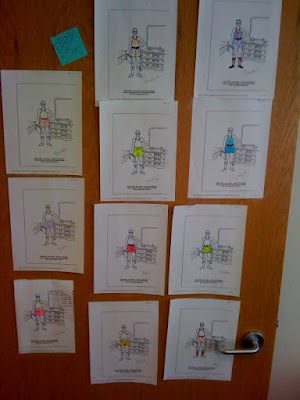 Clearly I inspire fear and command nothing but awe-struck respect from everyone around me!!

what? no mention of the late night ghost/shadowy figure (or loose window screen) tap-tap-tapping on the window? :P

Also - we never lost power as near as I could tell.

Yeah, Amy was totally freaked out by someone tapping on the window, but I went out into the cold, terrifying night and chased that boogie man away! (or maybe I yelped a bit before recovering a loose screen that was banging on mi casa)