Hey! Happy Halloween! Hope everyone is having a good one!
Our weekend was nice!
On Thursday Amy and I celebrated our third anniversary.  Mom and Dad took Raylan overnight, and we went out to a nice dinner at Odd Duck.  In the end, I think I liked the food more than Amy, but she still liked getting out to try a new place.
Mom took Raylan to his music class on Thursday, and then Mom and Dad brought him to my office on Friday for some workplace trick or treating.  Raylan has multiple costumes for this year, but he seems to have settled upon his Superman costume (provided by Funcle Ryan) as a favorite.  He got some candy at my office (the people at my office sort of go all out on Halloween with decorations and some costumes and whatnot), and then we headed over to Amy's office where he met more people and had more treats.  It was a fun way for Raylan to meet friends and coworkers at both of our offices.

Friday night we got pizza and just chilled out.  We watched Young Frankenstein (still hilarious).
Saturday we had what Amy refers to as a "down day".  This means we stayed home, although we were busy doing stuff most of the day, so I'm not sure she and I have the same definition of a "down day".
We went out to Kerbey Lane for breakfast, and then I went to the store to do some shopping.  Amy went running with Raylan in the jogging stroller.  She did a loop through our neighborhood that I think is somewhere around 3.5 miles.  She did that on both Saturday and Sunday.  That's some serious exercise, in my book.  Running over 3 miles definitely qualifies as exercise to me in any event, and when you're pushing a 29 pound kid up and down hills on a relatively humid day, it definitely becomes the sort of exercise that I wouldn't even attempt.  Good for her!
I went to the gym and used an elliptical machine in air conditioning.  Because that's how I roll.

There were some chores around the house, and then in the afternoon I watched the UT-Baylor game while carving a pumpkin.
UT won!!  We beat the number 8 team in the nation!  It was close, and the Longhorns almost blew it on many occasions (and the officials seemed to blow a couple of calls), but for once it came down to the wire and the Longhorns ended up in with more points when the clock ran out.
It's really fun to watch football when UT wins a close game. Wish it happened more often!

Saturday night Amy made spaghetti and we watched Battlestar Galactica.


On Sunday we got up and Amy made hash browns and eggs and toast.  She went running while I ran an errand or two.  I also went to the gym.
In the afternoon, after Raylan's nap, we went over to Hyde Park to meet Chad, Mary, and Truett for Polkapocalypse. 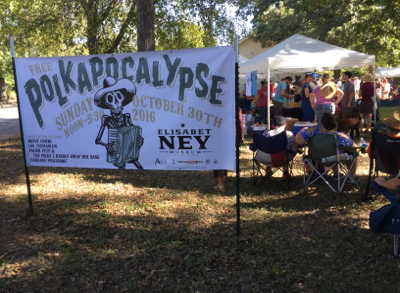 It was pretty fun.  The music was lively and entertaining.  Raylan wanted to run and run and run, though, and he was a little hard to keep up with.  In true toddler fashion, there were acres of land available for him to run around in, but he mostly seemed drawn to some stagnant water down in the creek.
We took him over to the playground, though, and Truett came with.
The weather was nice, and we had a good time hanging out.

Sunday night Amy made chili, and we watched Westworld.  We're both really enjoying that show.  It's not for the faint of heart, but it's well written.  Many mysteries.

And that was our weekend.  It was a nice one.  Went by too fast.