Hey!  Well, this weekend marked the15th Austin City Limits Music Festival, and, consequently, my 15th year of attending the event.
It's sort of crazy to think back on all of the years that I've gone to ACL.  There have been so many changes in that time- changes in my life, changes in the lives of friends, changes in the festival itself, changes in the music scene that the festival is intertwined with, and changes to the City of Austin.
And yet, some things have remained pretty constant.  The energy level always remains pretty high, there are always some acts worth seeing, the beer always remains a little overpriced, and, despite grumbling on some years about the weather or the lineup or the sound engineering or whatever, I'm always glad that I went.
I went with Frank again this year.  Thanks to him for going!  I think we're both pretty thankful to our wives and our families for allowing us the chance to get out and go!
Here's the lineup of what I saw:
Weekend 2
Friday
Bad Suns (partial), The Wombats
The Front Bottoms, Daniel Ellsworth & The Great Lakes, Banks & Steelz
The Strumbellas (good!), Chairlift
Bombino
The Struts
Corinne Bailey Rae, Flying Lotus
Radiohead
Saturday-
Margaret Glaspy
DJ Mustard
LL Cool J feat. DJ Z-Trip
Anderson .Paak & The Free Nationals
Blue Healer, Cage the Elephant
Conor Oberst
Sunday-
Pete Yorn
Nathaniel Rateliff & The Night Sweats
Willie Nelson
HAIM (partial)
LCD Soundsystem
The Strumbellas were really good and pretty funny.  Bombino was good.
Radiohead played a really great show.
On Saturday, Margaret Glaspy was good.  LL Cool J played a good set (do NOT call it a comeback), Blue Healer was interesting (really liked some songs- others less so), and Conor Oberst was good, even if he was really angry about everything from Donald Trump to the volume of the bands on neighboring stages to the reliance of Millenials on the Internet.  It was fun to watch LL Cool J lay down old school, analog hip hop (his DJ used actual record turntables).  They could throw in a bit of improvisation that the younger, computer-driven hip hop artists couldn't match.
On Sunday pretty much everything was really good.  Pete Yorn played some good ol' fashioned straight ahead Americans roots rock.  Nathaniel Rateliff laid down some soulful, funky, bluesy tunes (moments of conjuring Van Marrison).  Willie Nelson played and sang an hour set that was far better than any of us had a right to expect or hope for (it was better than even some of the television appearances that I've seen him in in recent years).
And LCD Soundsystem just played a nonstop, high octane set that kept the audience dancing throughout the whole thing.
Sunday was a very good day for music.  And we had great weather, too. 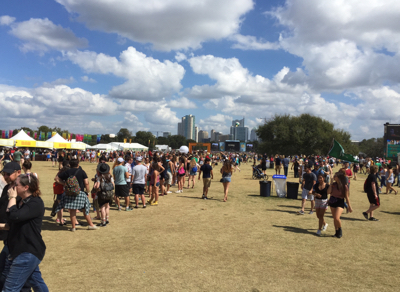 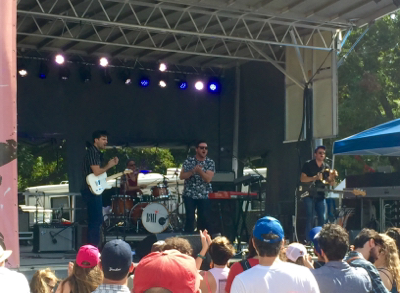 My parents spent some time with Raylan this weekend so Amy wouldn't be stuck doing solo parenting all weekend.  It sounds like he had a good time.  And he got a haircut! 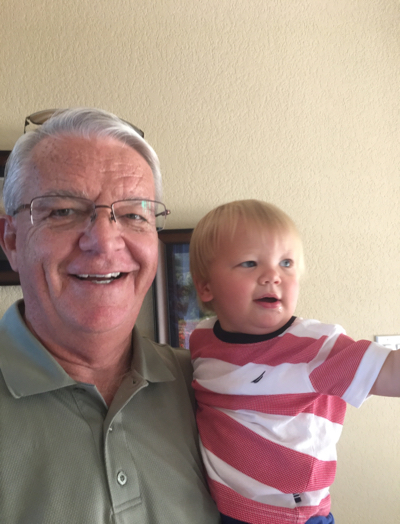 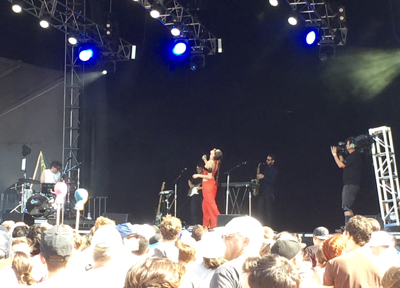 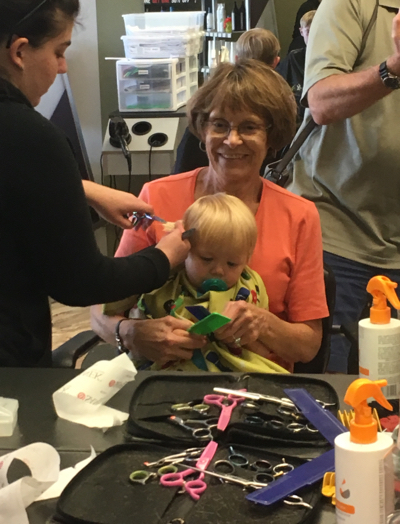 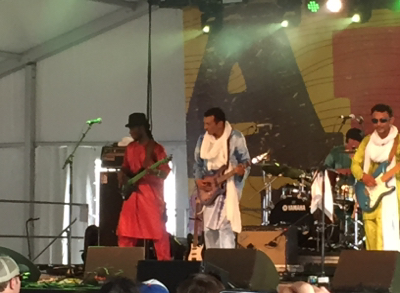 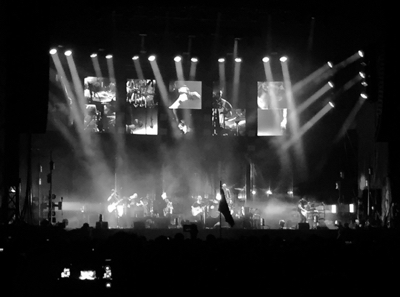 Frank at the gates 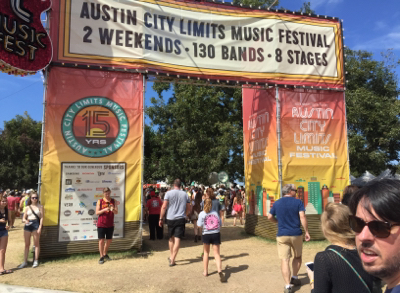 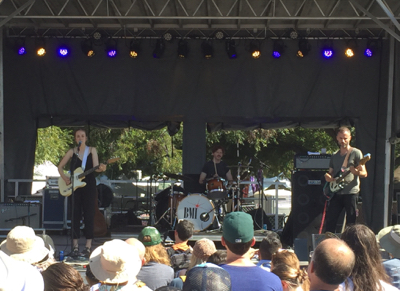 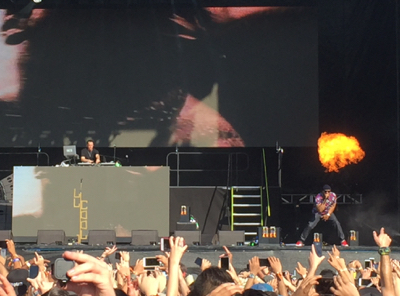 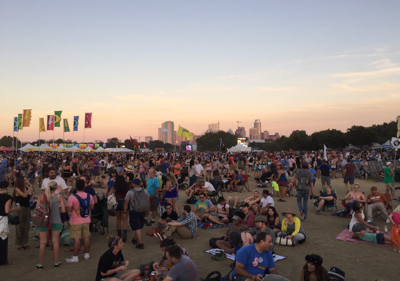 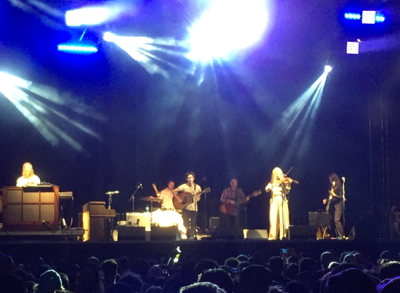 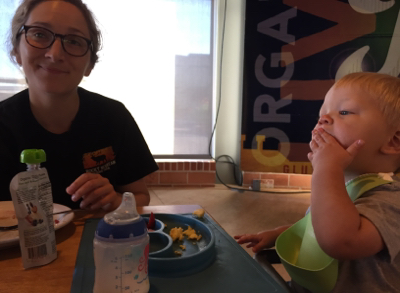 Earning my "Dad of the Year" award at Dick Nichols Park 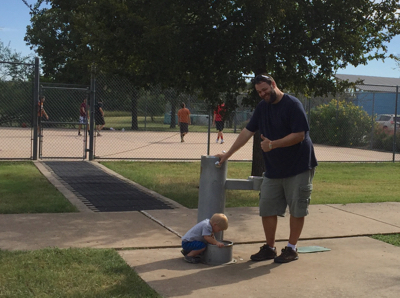 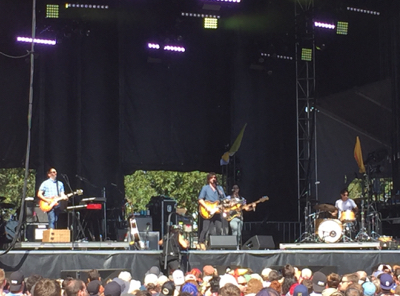 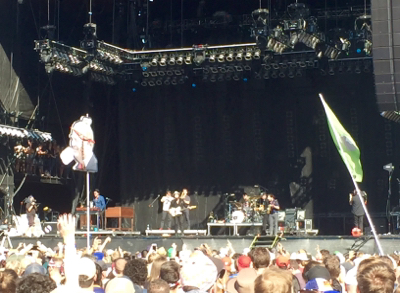 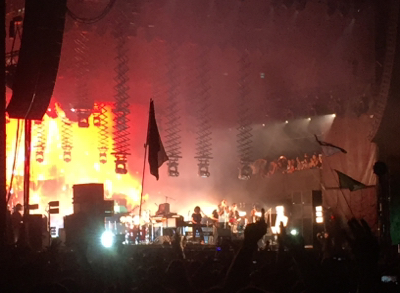