We had a pretty good weekend.   Friday night we just sort of chilled out, and watched the first half of Birdman:  The Unexpected Virtue of Ignorance.  Amy made some really good brownies. Pretty good.

On Saturday I went to the grocery store.  In the afternoon I got together with Chad and Tommy.  I played guitar, Chad played mandolin, and Tommy played drums.  We drank a few beers and played all kinds of different music- from folk music to The Cars.  Satuday night Amy and I got some Thai takeout and watched the rest of Birdman.  I liked it.  It was different, and strange, and although it was most definitely about Hollywood and/vs. the theatrical world of Broadway, I thought that the themes were still somehwat universal.  Many of us have an internal battle in which we try to reconcile an imagined ideal career for ourselves with the reality of a more workaday world inn which we become more successful at doing something which we find less satisfying.  In Birdman the unsatisfying but lucrative profession that our protagonist finds himself happens to be that of a star in a successful superhero film franchise.  But even for movie stars, success can prove emotionally unfulfilling when it doesn't satisfy lifelong goals.
Anyway, the movieself consciously walks a tightrope between seeing successful, unfulfilled people as whiners and seeing them as individuals to be respected, tipping their hat to them for still yearning after the creation of true art despite having already achieved the trappings of success.
Birdman had a much better sense of humor than I expected, which, coupled with its almost Kafka-esque sense of the absurd, probably saved it from being too pretentious and laborious.
Anyhoo, I liked it.
On Sunday Amy made a really good breakfast with sausage, biscuits, eggs, and hasbrowns.  Yum!
Afterward I ran over to the gym for a quick workout.
Then we took Raylan over to Garrison Park for his first ever trip to the pool!
After the pool Amy worked out and the we watched most of Big Hero 6 while Raylan napped.  Amy had rented it and watched the first part while exercising.  It was fun.  We enjoyed it.
It was fun.  He seemed a little unsure of himself at first, but he got used to the water and seemed to enjoy it after a little while.  We had a really good time with him.  The pool wasn't very crowded, and it wasn't too hot out.  Neat to see him experience the water that way for the first time.
Sunday evening I had Mono E practice with Jim, Frank, and Reed.  I thought we sounded pretty good.
And that was pretty much the weekend.
Mom and Dad have left for a two week vacation to Turkey and Greece.  We hope that they have a great time, of course, but it feels weird to have them gone.  We're used to having Mom watch Raylan at least one day a week, and, of course, we're used to being able to get in touch with them if something unexpected pops up.  But I hope they have a blast with the Andersons on their trip!

Well, that's it!  Hope everyone's doing okay as we move back into the school year for many of you! 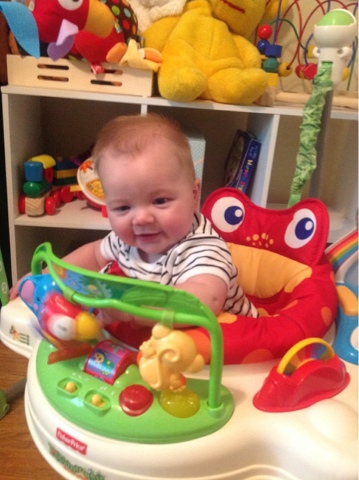 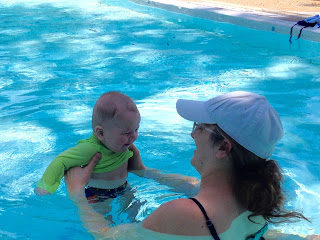 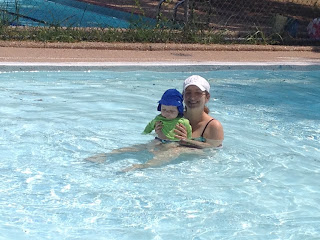 First trip to the pool!  In the sun we wear our
pool hats, of course!

I thought "Big Hero 6" was great, but didn't think people were talking about it. Turns out, I just don't hang out with people with kids the right age. I really dug it.

We enjoyed it, too. Great animation and a fun story. That robot cracked Amy up.