So, our Labor Day weekend was pretty good! Well, watching UT get crushed in their opener by Notre Dame wasn't very cool. but the rest of the weekend was pretty good.
On Friday Jamie and Ryan came over for dinner.  We got carry out Thai food.  It was nice.  Ryan and Jamie got some good Raylan time (he seemed to have a lot of fun with them), and then he went to sleep once his bedtime came, so we all got a chance to chat and catch up after that.


On Saturday we got up and went and picked up my new car from the shop.  My new car had a sensor switch malfunction, so it had been making little warning lights blink on my dashboard, so it had to get repaired this week.  All fixed now, though, and covered by warranty.  (yea!)


After picking up the Sorento, we ate some Dan's breakfast tacos and then I went to the grocery store.  Sometime shortly after my trip to the grocery store, Amy fed Raylan his first taste of solid food.  It was rice cereal, and he seemed pretty happy with it.  I mean, we didn't give him a whole lot, but he was fairly enthusiastic in eating a little bit. 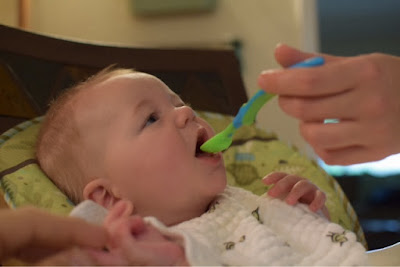 In the afternoon we took Raylan swimming for his second time at Garrison Park Pool.  He seemed to enjoy it even more the second time than the first!  I think he's gonna really like the water, but I guess time will tell.


On Saturday night Ryan and Jamie were either kind or cruel enough to invite us over to watch UT's first game of the football season against Notre Dame.  You know how UT has had a longtime tradition of picking much weaker opponents for season openers so that we could ease into the year by warming up against a team that stood no chance?  Well, this year the gods punished us for our arrogance, and UT became the sacrificial lamb.  It was ugly.  38-3.  Jeebus.  And it was Raylan's first football game.  Not even 5 months, and he already has a memory to suppress.
It was fun seeing the gang, though, and we were thankful to be invited!

On Sunday we went out for lunch for Uncle Donald's birthday with Susan, Ciara, Uncle Donald, Ryan, and Jamie.  We went to Longhorn Steakhouse.  Raylan came with us, and although he was pretty good for the meal, he got a little fussy toward the end when we were about to eat cake.   By the time we got him home, he was crying a bit (he was mostly just tired and couldn't sleep while we were out).  Overall, though, we had a nice lunch and got to hang out with Uncle Donald on his birthday.  We got to talk and catch up.  So it was all good!

Other from that on Sunday, Amy did a little bit of shopping.  Then I had band practice.  It was fun, even though it was just Reed, Frank, and me.  We sounded pretty good, even though we didn't have a bassist (Jim ended up having to cancel due to problems with the A/C at his house).  Sunday night we watched Silicon Valley on HBO.  It's pretty funny.  Hopefully we'll watch some more episodes.

Monday we mostly just hung out around our house, although Amy and I both took turns watching Raylan and going to work out at the gym.  Amy made a really good pasta dish for dinner with spicy sausage in it.  In the evening we watched The Americans.

And that was our Labor Day weekend.  It was nice.  Got some good Raylan time in, and got to see some family.  Even pulled off an obligatory Labor Day trip to the pool.  Hope Mom and Dad are having fun with Terri and Kirk on their trip to Greece and Turkey!

Hope you guys had a good one!