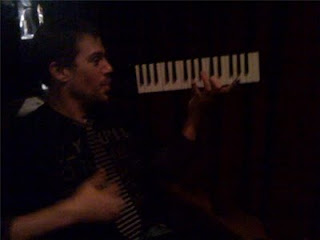 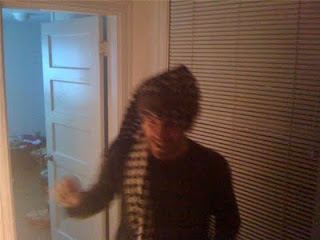 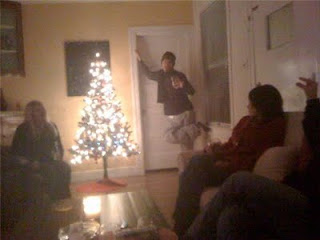 A bit of holiday conversation with the ladies...

And on Sunday, Roundball gives us a greater understanding of why he needs a secret identity....


It was a good weekend, all in all. On Friday I hung out with Ryan and Jamie. We watched a Canadian documentary called Cat Ladies which was about.... well, I think the title sort of speaks for itself. Anyway, the documentary was well done, and the whole thing was much more poignant than I had been expecting.
Saturday we went to Highball and celebrated Andy's birthday with some drinks, appetizers, and bowling. It was fun. I like the Highball.
After Highball we hung out a bit at andy and Rami's place, and I got to see the second half of the UT-Nebraska game. I was pretty much on pins and needles, but most of the rest of our gang wasn't all that into football. We all were glued to the TV for the last few minutes as UT squeezed out their last second (literally) field goal, though. Anyway, it was good for me to watch that game with people who weren't as emotionally invested in it as I was. I was nervous enough without anyone screaming or hollaring around me for most of it (and we all celebrated together after the UT win).
Sunday I had breakfast with Team Steans, did some Christmas shopping with Ryan, and had band practice with Reed. So Sunday was also a good day (I got a lot done in terms of the Christmas shopping, and Reed and I had a good, laid back practice).
So that was the weekend. It was a nice one, and it went by too fast. I'm happy that I got so much done in terms of the Christmas shopping.
Maybe I'll blog more later, but I blogged more than usual over the weekend and I'm sort of busy today, so for now I'm signing off.
Posted by J.S. at 8:48 AM

damn. Wow. I WOULD look good in those undies.