Ladies in Pop Culture Who Added Magic to Steanso's Youth

Well, some of you may be readers of my brother's blog, The League of Melbotis, and may have even stumbled upon one of his reoccurring special topics: Dames in the Media The League Once Dug. He basically talks about women whom he became familiar with through various media outlets that he became, er, fond of over the years. Well, recently a call went out for his readers to post similar lists of their own. Never one to pass up on the chance to take up some much needed blog content with a cheap gimmick, I have decided to throw my 2 cents in over here on my own blog (rather then sending my list to him so that he could use it to fill space on his own blog).

Obviously the list of attractive and entertaining women who have appeared in the media is a long one, so I've tried to narrow down this particular list to some of the women who I really remember catching my attention during my formative years. While I'm sure I will come up with more of these women over time, here are a few of the ones that managed to catch my eye very early on- some of them early enough on that I knew that I found them interesting, but I hadn't worked out all of the details on just why quite yet. 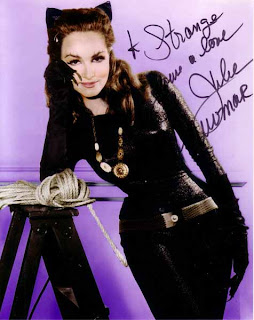 Numero Uno- One of the first women that Steanso has a distinct memory of from television was Julie Newmar playing Catwoman on the old Batman television series. Batman used to run in syndication when I was a kid, and when I was really young, I couldn't get enough of it ("Batman" was actually Roundball's first word, since he used to try to sing along to the Batman theme song with me). Anyway, right from the get go I knew there was something magical about that woman in that skintight cat suit, and I could never figure out why Batman used to always let her slip away, when he knew that she was just going to show up again later.... 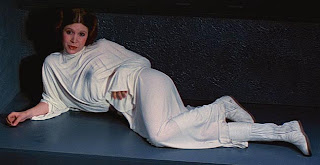 Numero Dos- Carrie Fisher as Princess Leia. I was hooked right from the beginning. It didn't even take the slavegirl outfit from Return of the Jedi to convince me. Right from the get go, Princess Leia always seemed cooler, smarter, and more confident than most of the action star men around her (which was saying something when she had to carry one of the only female roles in one of the biggest sci-fi franchises in film history). Anyway, all of these factors combined with the fact that she was also extremely attractive, and childhood Steanso didn't stand a chance. I was mesmerized. 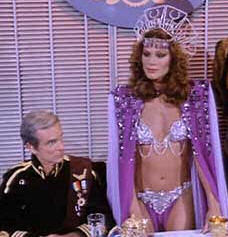 Numero Tres- Pamela Hensley as Princess Ardala. I don't know how many of you ever watched the Buck Rogers TV show, but the producers and directors of that show definitely weren't shy about putting their actresses in skimpy outfits. I guess that Buck Rogers' main love interest on the show was always supposed to be the very attractive and talented Erin Gray (playing Buck's friend and colleague, Col. Wilma Deering, who was also frequently clad in skintight outfits), but even as a kid I always found Buck's enemy, the scantily clad and consistently evil Princess Ardala, to be more interesting. Princess Ardala would kill people and do evil things without a second thought, but she seemed more interesting than Wilma just because she had this evil streak and you never knew what she was going to do next just to satisfy some crazy whim (plus, you gotta hand it to any kind of intergalactic despot who chooses to parade around her kingdom in her jewel-encrusted space bikini). Anyway, Buck was always running away from Princess Ardala and/or foiling her plans, but I never understood why. Sure, she had a few hangups, but she always seemed like a lot more fun than boring ol' Wilma. 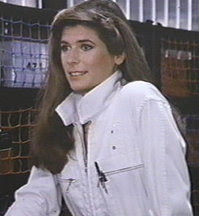 Numero Cuatro- Patricia McPherson as Bonnie. Bonnie was the super genius girl from the Knight Rider TV show who was KITT's personal mechanic (KITT is the name of the talking car, if you aren't cool enough to know that). She was cool and smart and understood how awesome super powered cars are. She was pretty and friendly and sort of tomboyish, and she was comfortable hanging out with the guys and doing guy stuff. In short, she was everything you might want in a girlfriend. When you were, like, 10. Oh yeah- she also had a giant, armored semi truck with a high tech garage in the back that could fix or upgrade KITT (while driving the whole time, mind you) at a moment's notice. Best makebelieve girlfriend ever. 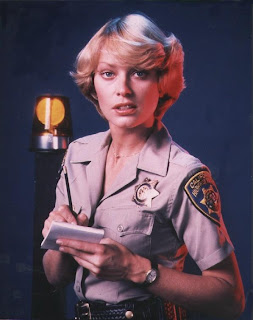 Numero Cinco- Randi Oakes as Officer Bonnie Clark.
The freewheelin' bachelor lifestyles of Officer Francis "Ponch" Poncherello and Officer Jon Baker included a host of different women who floated in and out of their lives, but Officer Bonnie Clark was more of a mainstay, and always a bit more special than the string of women who were involved with the two main characters. Anyway, as a kid I liked Bonnie because she was a woman and she was a cop, for God's sake! There just weren't all that women playing police officers on TV back then, and even though Bonnie mostly took a backseat to the antics of Ponch and Jon, you often got the feel that she had her own adventures going on when she wasn't sharing screen time with our heroes. The fact that she was an officer at the same rank as Ponch and Jon seemed to entitle her to a bit more respect than the other women that they had on the show (many of whom were victims that Ponch and Jon saved from car accidents and other dangerous calamities), but Bonnie was always just as good looking, if not better looking, than the discotheque/roller skate girls that Ponch hung out with (I think Bonnie may have gone out on a few dates with Jon, but I'm not sure).

That's about it for now. Funny that there are two Bonnie's on this short list. Did it used to be a more popular name? Anyway, since these are picks from EARLY in my life, and this is a really easy way to blog when I can't come up with anything, I may do another list later (if nothing else, I think I may need a list that represents my high school years).
Talk to you Adventurers later!
Posted by J.S. at 10:35 AM

i salute your list, but am a Wilma Deering/ Erin Gray man. She somehow took the bobbly helemts of Buck Rogers and just made them work, darn it.