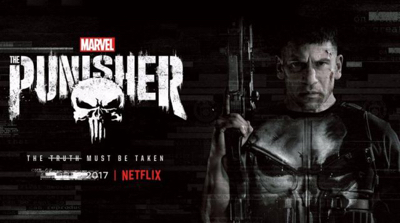 I finished watching The Punisher on Netflix last week.  Although I haven't picked up a Punisher comic in years, I used to sort of collect them back in Hugh school, and had a bunch of the issues from the first unlimited series featuring the character, which started around 1987.
My brother and I were both reading some superhero comics at the time (a lot of X-Men and Batman and stuff), and The Punisher seemed like a sort of answer to a fairly logical question that I had about superheroes at the time- the question being: why couldn't an average Joe just get himself some high powered firearms and fight villains?  Why do you need superpowers to do that?
Well, the answer, as the comics sort of make clear, is that fighting bad guys by just relying on guns sort of turns the whole operation into a blood bath.  When your superhero is fighting crime by unloading on bad guys with an M60, the line between superhero and deranged vigilante gets blurred pretty quick.
Nonetheless, I found The Punisher to be an interesting character in theory, even if he was not always utilized very well by the writers.  He was a military veteran who's family had been killed by criminals.  This, of course, sends our super soldier protagonist over the edge, and he ends up wreaking all sorts of havoc in pursuit of... well... punishment.
The comics were okay back in the day, but a bit one dimensional.  Mostly I read them as a kid because of the cool descriptions of the weapons and the inventive ways that The Punisher would take out the bad guys.
I'm not sure what's been going on in the comic books in recent years, but the new show is better written and much more nuanced than the old comics ever were.
Frank Castle, aka The Punisher, is a combat vet from the Afghanistan War who ended up working for a top secret kidnapping and assassination squad while deployed.  The cast of characters on the show include a bunch of other vets, many of whom are struggling with PTSD and other issues as they attempt to reintegrate into civilian life.  As in the comics, Castle's family gets killed, although this time their murders appear to be linked to Frank's secret work while deployed overseas.
I liked the show a lot.  It's still based on a comic book and keeps the vigilante plot line intact, but the themes surrounding returning vets and the difficulties that they face after combat deployments are grounded in very recognizable real-world issues.
I was impressed that they had taken the sort of "Rambo-esque", action movie style star from my childhood comics and turned him into a more fully realized literary figure.
Anyway, if I had come to the show with no prior history I'm not sure how I would have felt.  As someone who had an appreciation of the evolution of the character, however, I really enjoyed it.
Posted by J.S. at 8:31 PM