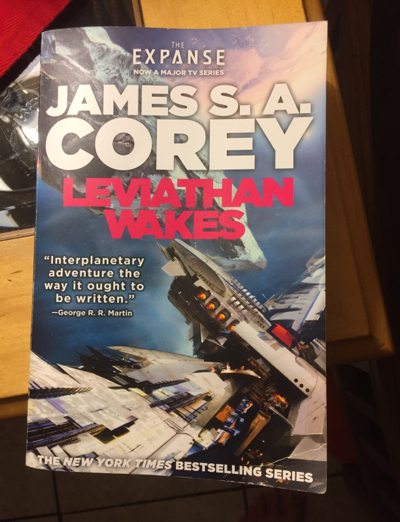 So I just finished reading Leviathan Wakes, a sort of space opera science fiction epic by James S. A. Corey (the pen name of Daniel Abraham and Ty Franck).  The novel is the first book in The Expanse series.
Amy and I have been watching the television series for The Expanse and really enjoying it.  The first season of the show essentially follows the events of Leviathan Wakes.
The book was pretty good.  It has some details that aren't included in the show.
Overall, though, this is one of those rare instances when I think I'd have to say that I really prefer the show to the book.
There are a number of reasons for this.
For one thing, the show actually has entire plot lines (and good ones) that the book doesn't explore.  Since I've only read the first book, maybe some of these plot lines are covered in the second book and brought in to add depth to the show. Even if that's the case though, I think that the backstory (essentially, events which are unfolding on earth which end up having an impact on our protagonists up in space) seems best told in the manner and sequence that the TV show utilized.  Without the plot line regarding Earth and the U.N., the focus remains almost exclusively on a small group of characters, and it sometimes becomes sort of easy to forget how many powerful players must actually be participating in the solar-system-wide struggle that makes up the book's central story.
Additionally, in a sort of unusual twist, I found the some of the main characters on the show to be a little more well-developed and interesting that the portrayal of those same characters in the book.  A lot of time is spent on the novel's two main characters, Holden and Miller, but other characters, particularly Alex and Amos, seemed better developed on the show.  Maybe that had something to do with the actors wanting to breathe more life into their characters, or maybe it had to do with decisions by the screenwriters and directors to develop more of a truly ensemble cast.  Either way, there was something about the way that Alex and Amos were brought to life on the show that just felt more effective than the way that they were portrayed in the book.  I also found Naomi and Fred to just be a little more relatable on the show than they seemed in the book.
Finally, the special effects on the show actually help.  The authors of the book explain certain things pretty well (e.g., Ceres station and Eros), but some of the ships and other things are sort of outlined in much more vague terms.
The visuals created by the show involve design and artistic vision which manage to be cool to look at, while still keeping the whole story in a sort of "near future" context, where spaceships are powerful, awesome things to behold, but which are still bound by the laws of "real world" physics and mechanics (there aren't any interstellar warp drive engines or technology driven wormholes).  The visuals of The Rocinante, for example, on the show helped solidify the ship as a sci-fi classic in a way that the book didn't really manage to pin down right away.
Anyway, the book had some merits that the show didn't have or couldn't produce (obviously, reading the book gave a sense of what the main characters were thinking, and the protomolecule was actually a lot scarier in the book than it was on the show).
On the whole, though, I think I prefer the show.
Weird....