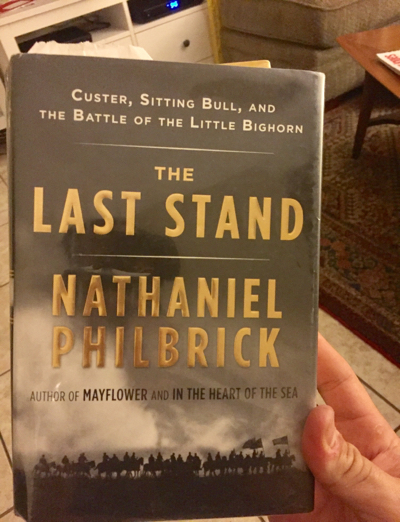 So I just finished The Last Stand: Custer, Sitting Bull, and the Battle of the Little Bighorn by Nathaniel Philbrick.
It's a good book.  It paints a vivid, thoroughly researched portrait of George Armstrong Custer, the 7th Cavalry, and  the events which occurred during the hunt for Sitting Bull and the Lakota, Arapahoe, and Cheyenne tribes in the Montana Territory in 1876.  I recently read Philbrick's Bunker Hill, and I'm not sure that this book flowed quite as well, but then again, Bunker Hill covers a longer period of time with many more events, so maybe the chronological chain of occurrences in that book contributed to the difference in styles.
Philbrick does a good job of exploring Custer as an actual human being rather than as the mythological figure that he's come to represent over time.  He portrays the good (civil war hero, decorated for bravery), the bad (Custer's impulsive nature, which had led him to the brink of disaster in prior battles against the Indians), and the ugly (Custer's penchant for keeping captured Indian women in his camp for use as, essentially, sex slaves).  One things that this book really drove home was the general awfulness of the American treatment of Native Americans during the push to move them onto reservations in an attempt to "pacify" those populations as well as the savage resistance mounted against that effort by certain tribes and tribal leaders.  The book is replete with violent images of Sitting Bull's warriors as they lay waste to Custer's forces, including the torture of soldiers and the mutilation of bodies following the battle.  Philbrick is quick to recount reasons for the rage that drove the Indians, though, alluding to various "battles" which the cavalry had previously engaged in which had actually amounted to massacres of women, children, and elderly members of the tribes which Custer faced (including at least one really disturbing event where the army had paraded the corpses of dead Indians through city streets in celebration after one such event).  Even before this battle, Custer's own scouts killed a number of Indian children who were found in the area just prior to the commencement of the fighting.  In fact, the mutilation of dead American soldiers following Little Bighorn was apparently carried out in many cases by women from the tribes, who visited pent up rage upon their dead enemies.  The carnage had become pretty awful on both sides by the time the Battle of the Little Bighorn occurred, although the U.S. military was undoubtedly the aggressor in the conflict.  It's obviously impossible to seize lands from indigenous peoples while refusing to tolerate dissent without being the aggressor, and, in addition, American forces, often seeing the Indians as almost less than human, carried out atrocities with alarming frequency.  Violent backlash was to be expected.

Anyway, the expansion of the American West was. for a great many of the participants, a horror show.
That's not the sort of thing I was really made to understand during my history classes in high school, but it's a truth that, as an adult, I've come to more fully recognize.

[I'd previously read Blood Meridian by Cormac McCarthy, and I had been sort of turned off by what I considered to be the over-the-top violence depicted in the book.  Reading a more historical account of events in the American West, I'm struck by the fact that the real world violence is only barely less horrific than the fictional version that I had previously considered unrealistic.]

When you consider the violence, intolerance, and oppression that was utterly enmeshed into the fabric of our culture as a developing nation, it really lends a different perspective to modern debates on topics ranging from civil rights to racism to the actual nature of the "American Dream".
We still have a long way to go, but, man, we've had a lot to overcome.

As with Bunker Hill, Philbrick does a good job of exploring and depicting the leaders involved in the run up to the battle.  His portrayal of not only Custer, but the officers within the 7th Cavalry, includes explorations of their motivations, their personalities, and the interpersonal relationships, friendships, and rivalries which ultimately played out as the battle itself unfolded.

It's a good book.  Admittedly, I didn't know much about the events surrounding the Battle of the Little Bighorn before reading the book other than believing that, "Custer was supposedly overconfident and got a bunch of soldiers killed."
As usual when reading history, there's a lot more to the story (although I'm not sure that my limited initial assumptions, although vague, were incorrect ).
There are some serious history buffs out there who might have a different take on the book, but I found it an interesting, compelling, and hopefully fairly accurate read.