Hey!  Hope everyone is doing okay!  Another year of the Austin City Limits Festival has come and gone.  We went to weekend two this year.  I attended ACL once again this year with bandmate, friend, and co-conspirator, Frank.  This was, I believe, the 16th year that I've gone to the festival.  I started this blog sometime after the festival in 2004, and probably first mentioned or documented my ACL experience for the first time in or around 2005, so this makes about my thirteenth annual entry on this blog regarding ACL in some form or fashion.
That makes for a lot of blogging over the years about ACL and artists and the whole experience.

There were a few changes this year.
They moved a stage to the other side of Barton Springs Road, thereby expanding the festival into the south side of the park for the first time.  I thought it was a nice change.  It seemed to spread the crowds out a little more, and it definitely helped to alleviate some of the congestion over near the food stands on the other side of Zilker Park.  It also seemed like it helped to cut down on some the sound bleeding between stages.

In fact, overall, the sound production was really good this year.  For an outdoor festival with multiple stages, they really did an amazingly good job.  I remember years when the sound would be terrible during particular shows or where the volume from one stage was overpowering the music at a different stage.  I didn't really experience any of that this year.

It's worth noting that the festival occurred this year in the shadow of the worst mass shooting in American history, an event which occurred at the Las Vegas Route 91 country music festival a week prior to weekend one of ACL.  Needless to say, security at the festival this year was pretty tight.  All in all, I thought they managed the traffic flow fairy well, though.

Frank and I had a good time at ACL.  As with the past couple of years, Frank drove over to our house, and we took the bus to Zilker from our place.

I'm just gonna go ahead and list the bands that we saw.  I know that most people aren't interested, but I like having this stuff documented so I can look it up down the line.

As far as standouts, I'd say that on Friday I was pretty impressed by Liz Cooper & the Stampede.  The Bishops were pretty good.  Strong female lead singer.  They're young, but they're probably up and comers.  Valerie June was cool.  I really dig her voice.  She's got an interesting style to her music.  Lemon Twigs are cool, but I'd seen them previously at SXSW.  Vulfpeck were good.  Funky and fun.  Great rhythm section.  Great bass player.  Bonobo was really good.  They were electronic, but with a drummer and enough live instrumentation to keep things interesting on stage (keyboards, bass guitar, a singer, etc.).  The XX were pretty good, too.
Friday had some good music.  The sun got a little intense at times, but it was pretty fun.

Saturday I liked Striking Matches.  Male/female guitar duo.  Slightly gimmicky, but they were both good guitarists (including some good slide guitar), and they both had good voices.  Car Seat Headrest sounded pretty good, but they aren't exactly the most charismatic live band to watch during a day show in a festival setting.  Maybe at night in a smaller venue might be different.  Dreamcar ended up being fun.  They sort of had a latter day sort of Queen vibe going on.  Or maybe that was just the voice and style of the lead singer.  I'm not sure.  The Black Angels were pretty cool.  They rocked.  Ice Cube was... well, he was Ice Cube.  He laid down mostly gangsta rap, and he did it very well.  After a few songs he commented on the fact that people nowadays forget that he started out in music, not as an actor.  But he still brings a ton of energy to his shows.  Good ol' gangsta rap fun.
Spoon was also good.  I've seen Spoon a number of times over the years, with some shows being better than others.  This was a good one.

Standouts on Sunday included Songhoy Blues.  They are a sort of African "blues" band from Mali.  They have a lot of energy, a unique sound (at least to American ears), and good musicianship.  Frank and I both really enjoyed their set.  First Aid Kit was also really good.  Great harmonies and catchy songs.  BadBadNotGood might have been the most technically talented band that we saw all weekend.  They're essentially a jazz quartet, although incorporating enough funk to keep a festival audience engaged.  Both their bass player and their drummer were amazing.  Frank said during their performance that they had to have studied music at some kind of conservatory or something, and sure enough, the founding members met while studying music at Toronto's Humber College.  Anyway, they were badass musicians.  Really good show.  See again.  We finished out the festival with Gorillaz, and they were great.  They have a pretty impressive stage show.  The basic band with the backing singers seems like it incorporated a dozen people, and then guest vocalists cycled on and off the stage throughout.  On the screens behind them were the famous animations that the group is known for, along with a crazy lighting display.  On top of that, the music is catchy and powerful and kept the crowd fired up.

So that was our ACL this year.  The weather got better and better each day.
I had a really good time (although I'll admit that I slept hard each night).
Thanks to Frank for going!

In the mornings I got to hang out with Amy and Raylan each day.  We went out to breakfast, and I got to play with Raylan and take him for a ride on his tricycle.

I took Monday off, and on Monday morning I went up to Raylan's school to play guitar and sing some songs for his class.  Amy came as well, to do an art project with the kids (they did Halloween ghost hands out of palm prints).  We sang a couple of Halloween songs (Ten Little Monsters and The Monsters Stomp Around the House) as well as Wheels on the Bus and Six Little Ducks.  The kids seemed to enjoy it.  Amy and I declared it Toddler ACL Fest. 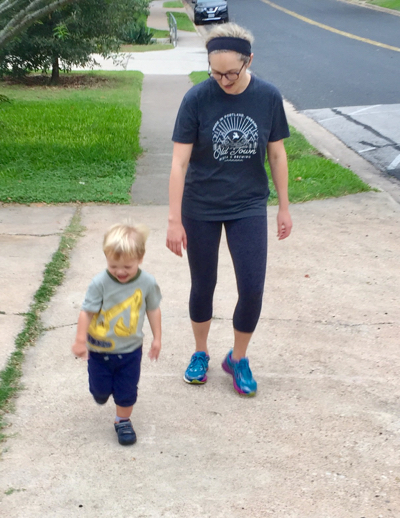 So that was the weekend.  This afternoon I took the rest of my vacation day and snuck out to go see It.  I thought It was not only the best adaptation that I'd seen of a Stephen King book (except The Shining, which is amazing, but arguably as much of a Kubrick work as an adaptation of King's novel), but also one of the best horror movies that I'd seen in a long time.  It had a great balance of empathy, humor, and genuinely scary material.
I enjoyed it, but Amy probably wouldn't have liked it, so it was a good one for me to see on ACL recovery day.

That's it.  Have a great week!