I spent most of this week down at an Advanced Criminal Law Course in Houston.  I lived in a hotel in a shopping mall for a week, sat in seminar rooms (when I wasn't watching the live stream in my hotel room), hung out with co-workers, and missed Raylan and Amy.  It's always sort of weird when we have these conferences in the middle of summer in these hotels that are attached to shopping malls.  This time it was super hot and swampy outside, while it was borderline cold inside the hotel and mall.  The whole thing messes with both your brain and your body a bit.
Anyway, I had some fun with my co-worker friends, but I missed Amy and Raylan.

On the way home, following some insistence from Amy, I stopped off in La Grange and bought kolaches at Hruska's Bakery.  I grumbled a bit because the traffic was bad as I was trying to leave Houston, and I was anxious to get home, but those were some good loaches (and I'm not even normally a big kolache fan).  More importantly, they made Amy happy.

I got home Thursday and worked Friday.  It was nice to get home.  My family seemed pretty happy to see me, so that was nice.
The weather has been hot here, and pretty humid in the mornings.  Pursuing our usual objective of finding a way for Raylan to burn off some energy, we took him over to Barton Creek Mall to do some mall walking on Saturday morning before the stores opened.
It was fun.  There weren't many people there, and the few that were about seemed to mostly be senior citizen types who were out walking the mall to get some exercise without suffering the heat.  They were pretty amused to see a hyperactive toddler gleefully running around the mall.

In addition to simply running through the mall, Raylan discovered the joy of spinning in circles until he was literally too dizzy to stand up.

We also checked out an aquarium in the mall which was filled with beautiful, saltwater fish.

On Saturday afternoon Ryan and Jamie came by and hung out with Raylan for a while.  There were many books read and pictures drawn.  All of the adults at one point were busy constructing loops and ramps with the Hot Wheels track before realizing that Raylan had moved on to something else...

On Sunday we went out to breakfast and went grocery shopping.
In the afternoon we went over to see Mary, Chad, and Truett.  Raylan sort of ran around their house like a whirling dervish, but he had a really fun time.


Later, the six of us went over to The Triangle for dinner at Hopdoddy (which was good- they have a surprisingly tasty turkey burger), and then, afterward, Raylan and Truett played in the splash pad down the street.  The rain had passed, but it was still overcast, and relatively cool. (like 88, maybe?) 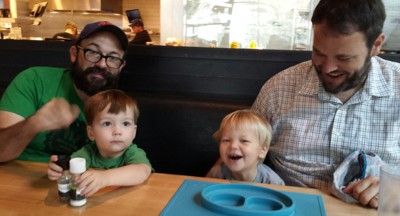 Anyway, we had a good time visiting with Chad, Mary, and Truett.
Afterward we headed home to get Raylan ready for bed.

That was the weekend.  As usual, it was too short, but I'm glad to be home!