Our weekend went well!
Did I mention that I love three day holiday weekends?  Well, I do.  It was really cool having the 4th fall on a Friday this year.
On Thursday night we went went to Esther's Follie's with my parents, Don, Judy, Sarah, Marlene, and Tom.  I've seen different shows at Esther's Follies a number of times over the years.
I liked the show.  The vaudeville-style performance is a lot of things- by turns silly, witty, farcical, satirical, and wacky.  It involves everything from biting political satire to magic acts.  I think Amy was a little bit overwhelmed by the loud, hyperkinetic nature of the show (she didn't know what she was getting into, and we were sitting right down front under the PA speaker), but I'm glad she got to experience it.  If I ever get her back out there again we're going to sit a little bit farther back...

On Friday we went down to San Marcos to Dick's house (Jamie's dad) with Ryan, Jamie, Nicole, Matt, and Juan to celebrate Independence Day.  We had a really nice time.  Ryan grilled up some hamburgers and hot dogs, and we had potato salad and bean salad and chips and beer.  Amy made a dessert pizza, and Dick made an apple crisp.  We had a good time.  Despite getting a little rain (which was quite welcome), we got to spend some time sitting outside.  In the spirit of true American patriotism, we spent some time complaining about politics and discussing TV shows.

The drive home from San Marcos was kind of crazy.  The radio was tuned to a classical station that was playing Sousa tunes and patriotic movie soundtracks, and we were night driving up a moderately busy I35 while lots and lots of fireworks went off both close to and far from the highway.  It seemed like it went on all the way back into town.  I think we probably hit the timing just right to see fireworks displays in San Marcos, Kyle, and Buda, as well as some pretty impressive private fireworks displays.
Anyway, it was a cool drive, and a little surreal.

On Saturday we did some grocery shopping and exercised.  I did a little bit of yard work.  We went to Home Depot and bought new light fixtures/sconces for the front of the house.  Amy helped me hang them up.  Mounting them turned out to be a little bit more complicated than I first imagined, so it took longer than I thought it would.
It got a little bit warm out there, but we got it done.  Couldn't have pulled it off without Amy.

Saturday evening we took it easy.  Had some fish, and watched Orange is the New Black.

On Sunday we went out for breakfast, and then I went for a bike ride.  It hit my 2000th mile on my bike during my ride.  I documented it with a picture of my odometer and a picture of my location at the time that the odometer flipped to 2000 (which was on Buffalo Pass, on my way home from my "South Austin Loop").  The weather was nice, and it was pleasant, ride.  Just a little over 12 miles. 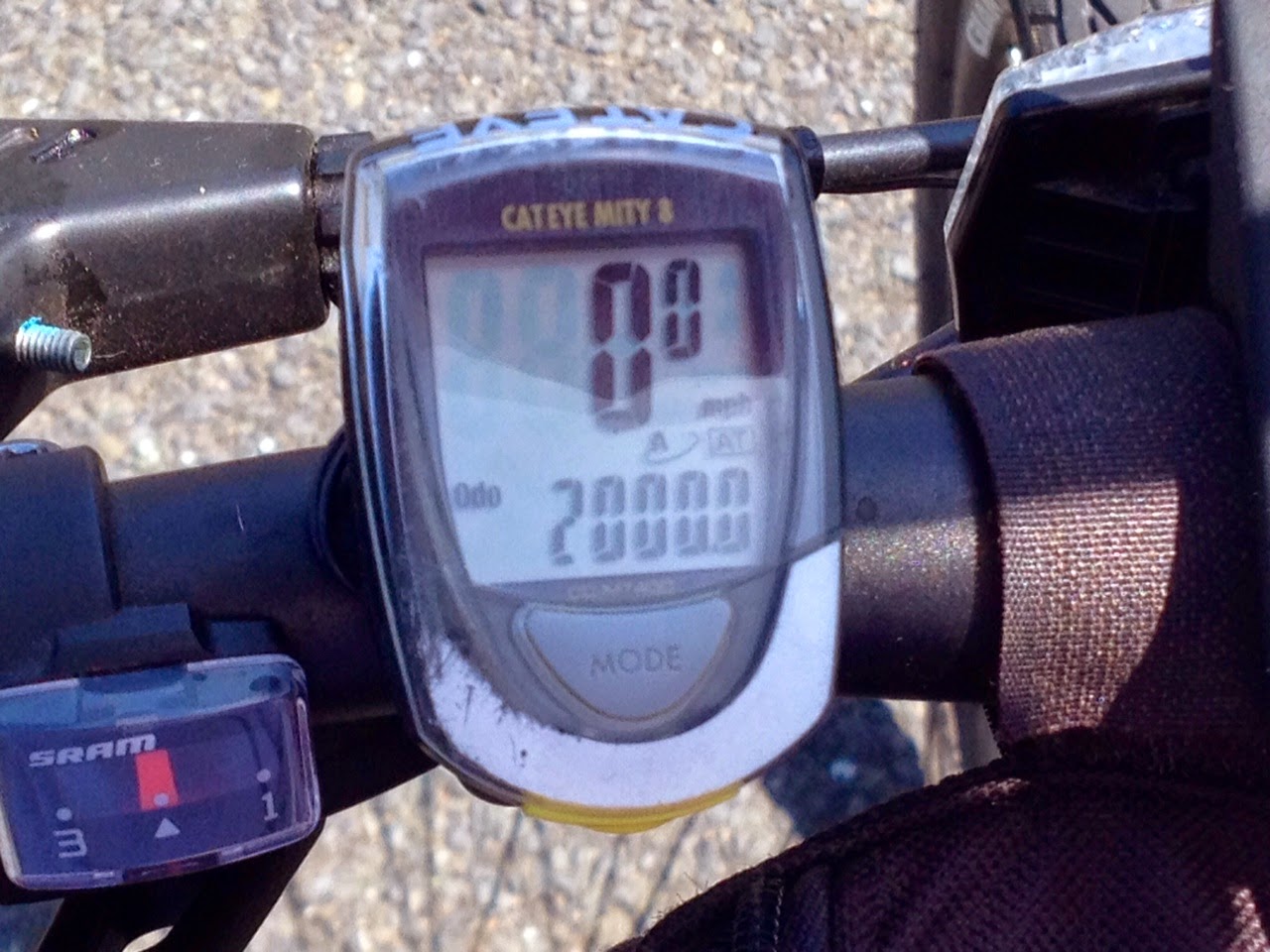 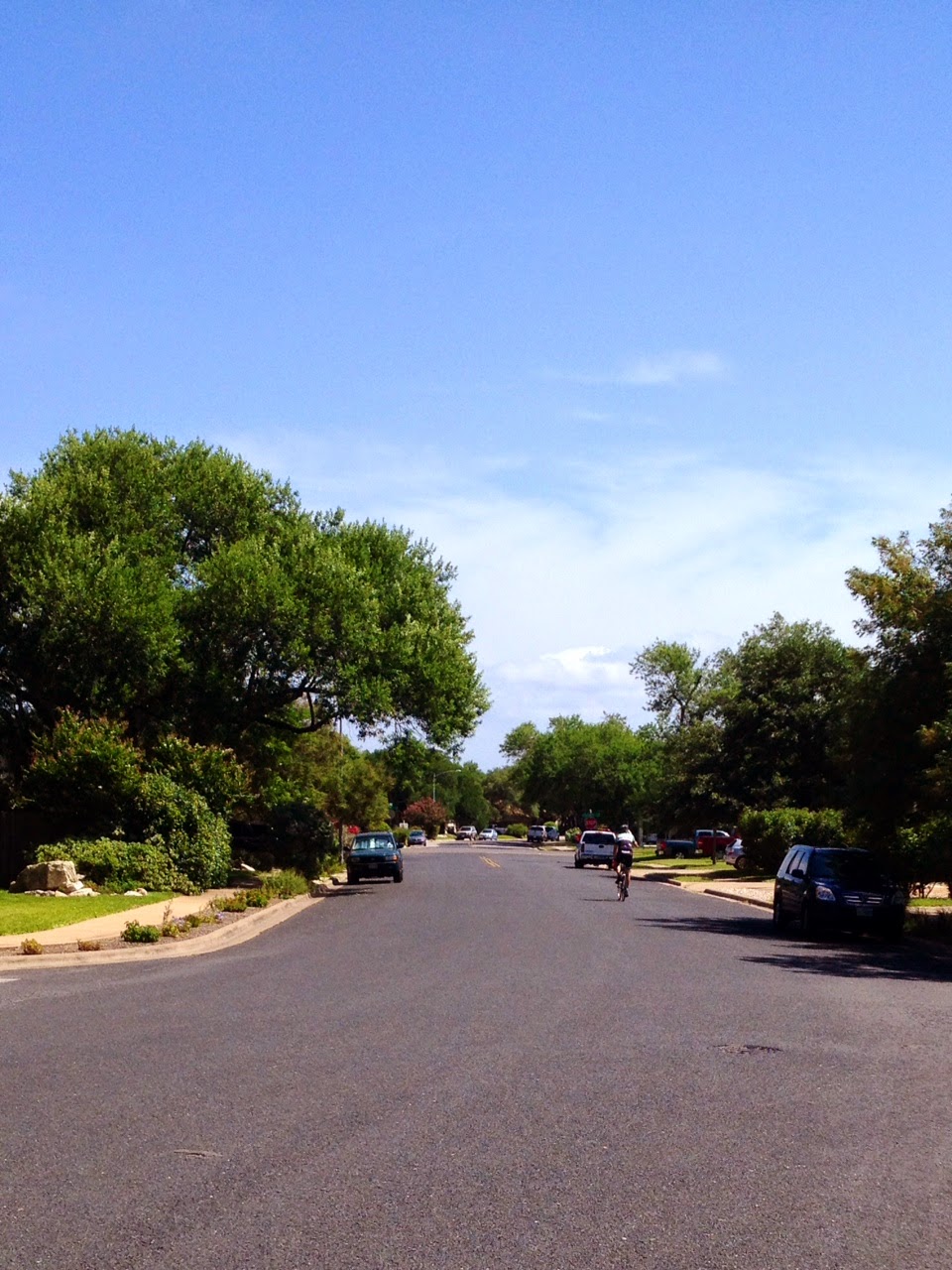 I'm not trying to boast or brag about the 2000 mile thing (I have friends who probably have actually ridden ten times that far or farther), but I think it's okay to have some pride in things that require a little effort, right?
I wish I'd hit the 2000 mark a little sooner (I've definitely been slacking lately on the cycling), but it was good, anyway.  Now to see if I can get to 3000 a little more quickly...

After the bike ride I went to the pool with Amy.  It was strangely pleasant outside for July in Texas. 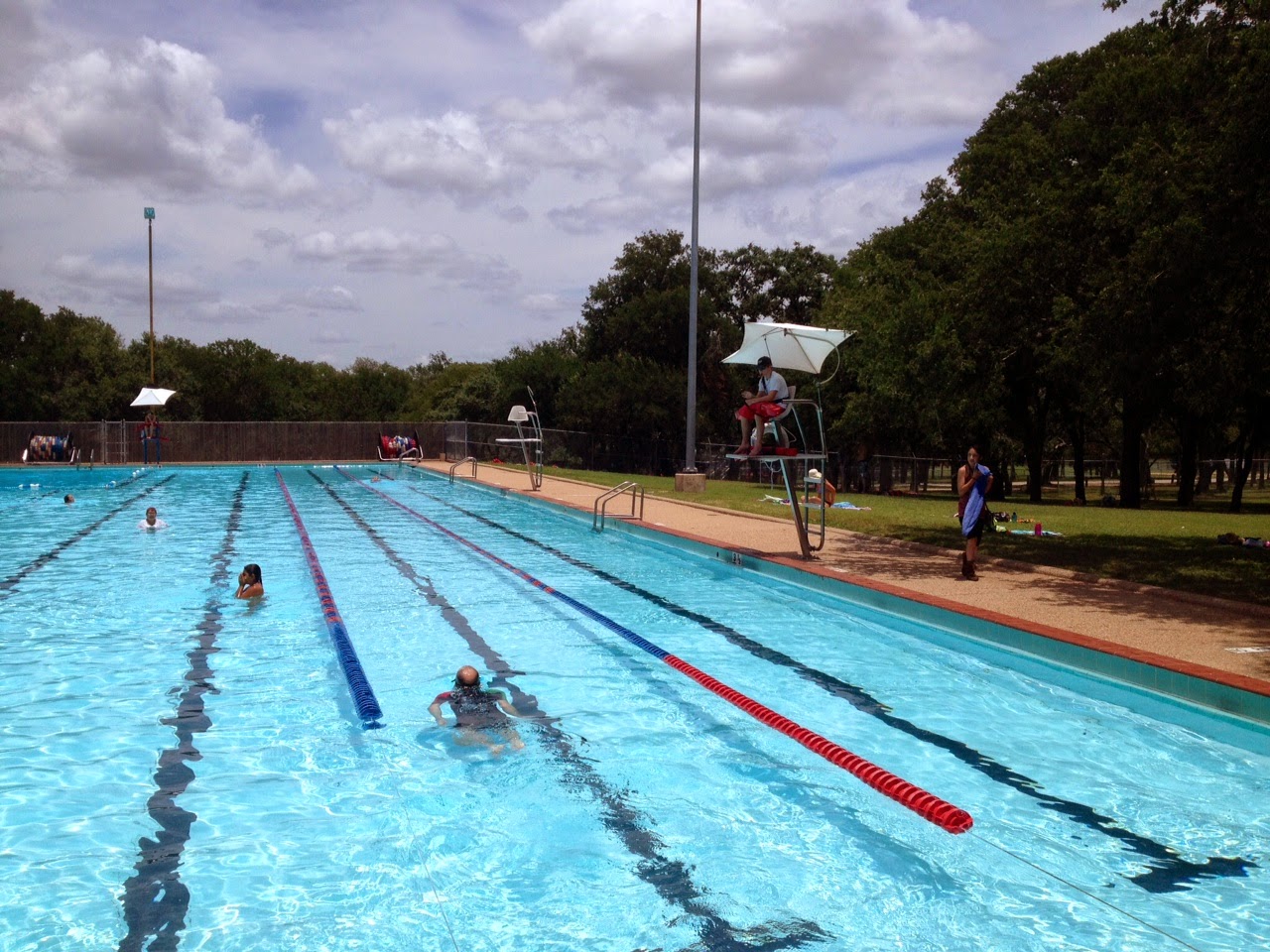 We had a nice time at the pool, had some sandwiches and watermelon for lunch, and then I had band practice in the evening.  Remarkably, all five of us made it to band practice.
That was cool.  We played some new stuff and some old stuff.  Somehow we pulled off a pretty decent impromptu version of Gimme Shelter, despite never having played it before or having practiced it.

And that was basically it.
Amy made some really tasty green chicken enchiladas for dinner.  I tried to watch an episode of 24: Live Another Day, but I'm having a hard time getting through it.  I used to really like 24, but now it all seems very contrived and forced, with some really bad acting thrown in (William Devane just manages to remind me how silly the show is every time he delivers a line).
I finally gave up and read articles on my iPad instead.

So that was the weekend.  It was very nice.  Even though it was three days long, it went by really fast...