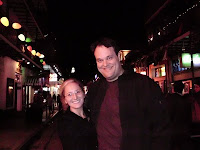 So, Amy and I took a trip to New Orleans over the weekend. I was a little worried about whether the whole trip was going to get off the ground at all, since I spent most of last week battling some kind of nasty cold type thing, but I rested up and drank my orange juice and was only sniffling a bit by the time we made it to New Orleans.
And I'm so glad we made it! It was a really fun trip!
The first night that we were there we just walked down Bourbon Street, and we went to Pat O'Brien's. We had some drinks (Amy had never been before, so we had to get a hurricane), and stopped in some small restaurant for shrimp and boudin. 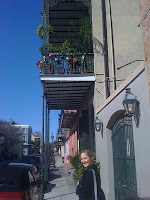 Friday we went to Cafe Du Monde and wandered around the French Market and the rest of The Quarter. I always like looking at some of the houses down there and wandering around. We walked along the Mississippi just a little bit and visited the aquarium (which was really cool). Friday night we had a really nice dinner at the Pelican Club. Good food and a nice place. I really had a good time.

Saturday we got up and drove out look at houses and just sort of check out the Garden District. We had breakfast/brunch at a small cafe (which was good, but I can't remember the name). We drove by Tulane and visited a cemetery in the Garden District (which was interesting- lots of those really old, New Orleans-style, above ground crypts with dates ranging back into at least the early to mid 1800s). We wandered around the Quarter a bit when we got back, including a visit to St. Louis Cathedral. We had another really nice dinner, this time at Bourbon House, and after dinner we went to Mid City Rock and Bowl to check out Kermit Ruffins and his band. The Kermit Ruffins show was really fun, and the Rock and Bowl was a really cool place (a full fledged bowling alley along with a large stage for music and a big dance floor). And of course Kermit Ruffins was really good. He's got a cool, Louis Armstrong sort of voice (kind of growly and gravelly, but also melodic), and he's a great trumpet player (who takes what have to be some fairly difficult songs and makes them look effortless). It was also fun to watch the New Orleans locals dance. At one point they all did some kind of synchronized dance together, which must have been a tradition because I never heard Kermit or anyone else giving them instructions on what to do (they just kind of all dropped into the thing together. The spontanaeity of the thing made me feel like I was in the middle of a musical- except with more booze). The owner of the place, who had a pretty thick New Orleans accent, got up on the stage a few times to do things like lead us in the national anthem, praise the New Orleans Saints, and announce that Kermit Ruffins is a nice guy who knows how to live in New Orleans better than anyone else in New Orleans. As with the dancing, there may have been some amount of alcohol involved in the speeches. Really fun. 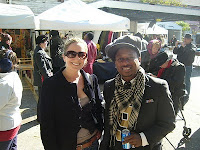 Sunday we went to the Treme Creole Gumbo Festival. We had a good time there, too. There were some locals selling art, and also a number of food vendors who were selling samples (and larger portions) of things like gumbo and po boys. We ate tasty gumbo, listened to some really good music by people like Lucien Barbarin and the Baby Boyz Brass Band, and when Kermit Ruffins showed up (apparently just to eat gumbo and hang out- he wasn't scheduled to play that day), we got to shake hands with him and tell him we had enjoyed his show the previous night. Nice guy.
We wandered back through the Quarter, stopping to look at a condo that was having an open house (cool, but, of course, a lot of money for a small space), and visited a museum exhibit near St. Louis Cathedral that was about Hurricane Katrina (interesting, but sad, sad, sad- it really gave you a greater understanding of exactly how much impact the storm really had upon the city). Sunday evening we went to a Christmas concert at St. Louis Cathedral. Ingrid Lucia, a New Orleans style jazz singer performed. She had a great band, including fellow frontman Glen David Anderson (who's apparently pretty well known in his own right) who played trombone and had a big, booming voice that just filled up the cathedral (without the use of a microphone) as he sang gospel and jazz songs. Ingrid Lucia was good, but, to be honest, I thought Anderson upstaged her a bit her- he sang at least one sang that actually gave me goosebumps. Anyway, it was really, really cool to see such a good jazz band perform in a cathedral. I'm sure I'll never forget it, and Amy was the one who found it, so big kudos to her!
So it was a really good trip. In particular, I had a great time enjoying New Orleans with Amy. She was fun to travel with, enthusiastic, and we just had a great time together. It was her first trip to New Orleans, and I just love that city, so I hope I showed her a side of it that helped her appreciate the place! Such a cool city. I already miss that food!
Posted by J.S. at 8:13 PM

could not have summed it up better myself! Thank you for taking me. So fun! :)

Thanks for sharing. I am headed to New Orleans next week for a little pre-Christmas vacation. It's my first time so this insight helped! Merry Christmas! -Valerie